"If you're..." (if yoor) broadcasting term. A generic opening used by sports broadcasters to project their in-game analysis onto a particular coach, player, or team.

Usage example: If you're the Boston Celtics, you want to lose the rest of your games to have a better chance of winning the draft lottery.

Word History: I can't prove this, but I suspect the "If you're..." trend was started by Hubie Brown. I've been watching Hubie broadcast NBA games since the late 80s, and he uses the "If you're..." statement at least 20 or 30 times a game. Although, to be fair, he sometimes switches it up and uses an "If I'm..." statement. For example, "If I'm Mike Brown, I tell Lebron James to go out and win the game for me."

Former Pacer Mark Jackson, who's currently calling games for ESPN, has taken the "If you're..." torch and is running away with it. I recently counted a series of six consecutive sentences that Mark started with "If you're...". So, if you're Mark Jackson, you need to go buy a Thesaurus or something. 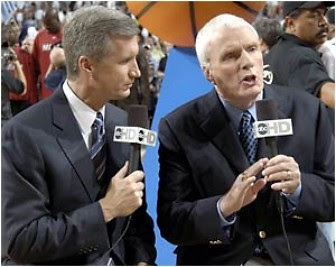 "If you're Hubie Brown, you're an undead
mummy in serious need of moisturizer..."

Word of the Day
Previous Posts
D-2 player impersonates Kobe Bryant
The best game you didn't watch this weekend
Basebawful: Unintentionally Funny Headline edition
Nash and his historical accomplishments
Basketbawful versus a man and his mustache
Kobe, Nash, and the defensive myth
Word of the Day: Mark Cuban Rule
Kobe's 65? What about Nash's 64?
Old-school Celtics commercial
Word of the Day: un-emulate-able