We had an "all-company meeting" at work today. At my company, these meetings are comprised of the following elements:

1. A boring speech by the CEO

2. A financial review by the CFO


Since points 1 and 2 are boring and therefore suck, we the employees sustain ourselves on points 3 and 4. Especially point 4. And since I'm an emotional drunk, a post-meeting malaise often sets in, during which I can be found sitting disconsolately in a cubicle Googling my college girlfriend because maybe, just maybe, after all these years we can actually make it work.

Yeah, I get nostalgic. And you know what I miss the most at this particular moment? The NBA on NBC. I miss it a lot. The music (a magical ditty by John Tesh called "Roundball Rock"). Those incredibly dramatic (but never too cheesy) introductions by Bob Costas that made whatever game it was seem like the most important thing going on in the world at that moment. The play-by-play of Marv Albert and "Czar" Mike Fratello. The bumbling sideline reporting of Ahmad Rashad. The occassional commentary from Magic Johnson, always good for a few crazy statements and invented words (think fundamativity or harmonism). Even the logo. Man...those were good times. 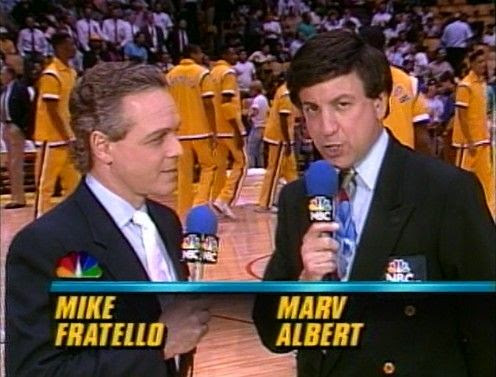 Can you remember a world where Mike Fratello had a perm and
Marv hadn't bitten some poor woman's back to shreds? Good times.
I know I'm not the only one who enjoyed the NBA on NBC. There's an entire Wikipedia page devoted to it, as well as a list of list of notable games telecast on NBC. Watching the NBA on ABC or ESPN just isn't the same. TNT has it's own special charm, especially with Ernie, Kenny, and Charles (with an occassional appearance by Magic, who, unfortunately, doesn't say as many wacky things). But nothing matches the old NBA on NBC days.

Oh well. I've got to go stalk my ex-girlfriend now... 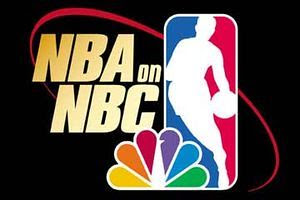 Ben said...
Growing up, I always enjoyed the Miller Genuine Draft Genuine Moments, where they would show highlights from old gams. This was always one of my favorite parts of the game, as I got to see old Wilt and Russell highlights.
10/04/2006 10:41 PM

Anonymous said...
good lord. i also miss nba on nbc. i however am not crazy enough to stalk college girlfirends. i stalk my high school girlfriend....its much cooler.
10/05/2006 4:22 AM

Joe said...
YES!
Even though Tesh is supposedly an Alien, I used to get all hyped up when that theme would come on! You knew you were in for some exciting basketball. ESPN/ABC's coverage feels like it has been 'santized for my protection'.
BRING BACK THE NBA ON NBC!
10/05/2006 12:48 PM

Ben: Thanks for reminding me about those Genuine Moments spots. I used to get so juiced during those spots.

Stevo: I agree, stalking your high school gf is cooler than stalking your college gf. But in my case, they're the same girl, so I'm in the clear.

Sloppyjoe72: Yes, ABC is sanitized. They ruined (then lost) Monday Night Football, and they're dumbing down the NBA.

todd lerner: No, no. You're actually 27 percent cooler. There's an extra multiplier you forgot to use in the equation. Don't worry; math skills are not a prerequisite for visiting this site.

anonymous: Thanks for the phonetic representation of Roundball Rock. I actually tried to do that myself, but was too drunk. Graci, graci.
10/05/2006 4:00 PM

Word of the Day
Previous Posts
Marquis Daniels is a pussy injured
Parkergoria is no more
Phil loves Kwame
Dwight Howard boldly predicts title run
Kobe Bryant is ready for [Insert Subject Here]
Karl Malone: Not a supervillain after all
Michael Jordan likes to watch golf
This (Lebron James) is not (Lebron James ) real ne...
Question(s) of the Day
Stephon Marbury is a Top 40 hit