Yesterday we described the Spurs' Robert Horry as "the ultimate Intangible Man." Our buddy Brett from The Association begged to differ:

"As far as Horry, I would say he's not the same as the rest of the guys you've mentioned. With the exception of Rasheed Wallace in last year's finals, everyone on the floor usually knows how dangerous Horry can be. I don't think anyone doubts Horry's worth beyond his numbers, do you? After all, the dude has 6 rings, and those aren't Jack Haley rings, in many cases it could be argued that the teams he played for wouldn't have won the titles without his big shots. Especially in 2001, 2002, and 2005."

I both agree and disagree with what you're saying (and, naturally, I appreciate the unexpected but completely accurate boot-to-the-head of Jack Haley). Yes, it's absolutely true that players and experts regularly give due credit to Horry's contributions. There's a reason he's referred to as "Big Shot Rob" (or "Big Shot Bob", depending on who's talking). But, despite his history of hitting critical shots in key games, someone always ends up leaving him open. And Rasheed Wallace isn't the first person to do it. Remember the shot that almost beat the Spurs in Game 5 of the 2003 Western Conference Semifinals? Sure, that's an example of a big shot he didn't hit (and I can't help but think the Lakers would have won that series if that one shot hadn't rimmed out), but the point is this: somebody left him open (maybe because he was 2-for-38 in threes during those playoffs). Would Shaq or Kobe ever have been left open in that situation? Of course not. In fact, the defense was sagging toward those two players, which is why Horry was open.

We could sit down and make a loooong list of the critical shots Robert Horry has hit. The question you have to ask yourself is this: how has he done it? Because let's face it, Horry isn't a gifted athlete. He's not a big-time leaper. He's slow. He's old (now). And he's never really had the ability to create his own shot anyway (which is why all those Scottie Pippen comparisons in the mid-90s died a cruel and bitter death). His game, and all those crucial baskets, have relied on the fact that, at some point, his defender forgets about him. Then BOOM! Game over.

The real difference between Horry and the other people I talked about is his longevity. He's been playing the Intangible Man for 14 years, and (as you pointed out) he's been a major contributor in six championships with three different teams (despite playoff averages of only 9 PPG on 43 percent shooting). As a result, he's earned a reputation that most Intangible Men never achieve. I mean, some people last year argued that Horry should be named Finals MVP...despite modest averages of 9 points and 5 rebounds a game. That movement never picked up any steam, but has any player in history even been considered for Finals MVP after averaging 9 points? It's due mostly to the fact that he exploded for 21 points in Game 5 (including the 3-point clincher). Yet make no mistake; he scored those points on open shots (except for that sick one-handed dunk he threw down in overtime) and hit the game winner only because he'd been left open. Superstars, All-Stars, and big-time scorers aren't left open on the last possession. But, historically, Robert Horry has been. And, unless he retires after this season, he probably will be again.

Most teams defend game-winning shots with the following assumption: "We cannot let the superstar beat us." Unfortunately, no one has ever kept track of game-winning assists. But I'm here to tell you, Larry Bird had scores of them. I have games on VHS where everyone from Jerry Sichting to Scott Wedman hit a game-winning or game-clinching shot, courtesy of a pass from Larry Legend. Similarly, Horry always seems to be on the receiving end of a pass from a double or triple-teamed star. And I tend to think that he wouldn't be so wide open if he was a major offensive force. Would he have been left open if he scored 25 points a game and was a major component of his team's offense? I doubt it. That's why I called him the ultimate Intangible Man. He'll never truly carry a team (except for maybe the rare game here or there). You'll never be able to look at a box score and say, "Hey, this guy won the game." But he has done it time and time again, despite his reputation for hitting big shots. 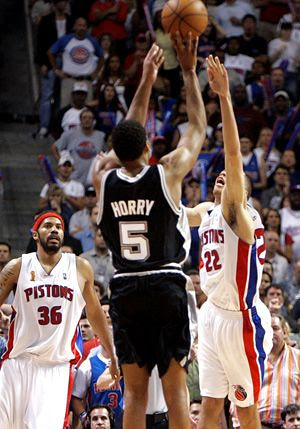 If you're defending the last shot and
you see this, it's already too late.
1 Comments:

Anonymous said...
I feel the need to add to the Horry talk. (BTW - only the rednecks from San Antonio call him Big Shot Bob. I believe 90% of the people from Texas are named Bob or Billy or Billybob, but I'll have to do some further research)

"Remember the shot that almost beat the Spurs in Game 5 of the 2003 Western Conference Semifinals?"

I most definitely remember that shot! That maybe one of the most influential misses in NBA history. The full explanation will be a future post on “The Association”, but here’s a quick reason: Horry hits the shot, San Antonio loses a heartbreaker in Game 5 (blown 25 point lead). San Antonio loses game 6 because of the letdown factor and the Lakers move on to the Western Conference Finals beating a Dallas team that at the time could never take Shaq. The Lakers play NJ in the finals and win.

The key of all this… Kobe is NOT in Colorado!

Word of the Day
Previous Posts
Muwahahahaha!! (or "Sheed gets his pie hole shut")
Word of the Day: Intangible Man
Pat Burke delivers the Human Victory Shot
A picture is worth a thousand sodomizations
Memo to Juwan Howard: Put down the sunglasses and ...
Word of the Day: gamesmanshit
Yet another bitter Pacers fan rant...
Unicycle basketball
Word of the Day: flop-ternity
Zo cries, Harris flies, and a night of fun was had...