Scot Pollard is...a weird guy. Yeah, I know. Just call me Captain Obvious. But seriously, every time I see that dude, he's sporting a new, even stranger look. In fact, here's a quick quiz. Which of these famous people has Scot, at one time or another, looked exactly like:

F. All of the above.

The correct answer, of course, is all of the above. What's that? You don't remember him dressing up like Britney Spears? Well, my friend, this is your lucky day. Or your unluckiest day, depending on your point of view. I give you: Scot Pollard in drag: 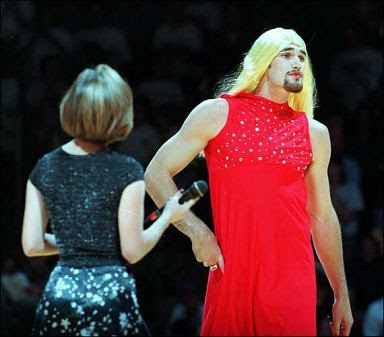 Oops. He did it again.
Believe it or not, this happened while Scot was a member of the Kansas University Jayhawks basketball team. Apparently, they open each season with a midnight event called Late Nite. In addition to a scrimmage, the event features Jayhawk players singing, dancing, and, most importantly, "acting the fool." And honestly, who better to act the fool than Scot Pollard.

As crazy as this may seem, there was actually a point to him slipping into a lacy red prom dress. See, he was proposing to his then-girlfriend, Mindy Camp. I can think of few things more terrifying than Scot Pollard in a dress, let alone Scot Pollard in a dress proposing marriage to me. Transvestism must do it for her, though, since she said "yes."

But who knows? Pollard may have been on to something, because he became the first basketball player in KU history to score 14 points, grab 7 rebounds, and block 4 shots while wearing bright red polish on all 10 fingernails. It may be time for the Pacers to hit the "plus-size" women's section at J.C. Penney.

Pooperiffic Extra: Scot's player page at NBA.com may be the saddest, most shameful thing I've ever seen. And remember: I followed Gheorghe Muresan's career, so I know sad and shameful. Here are a few of his "career highlights":

To sum up, Scot's career highlights include breaking the top 40 in rebounding and blocks, playing a total of 13 minutes during the playoffs, missing half a season, and scoring 8 points. If I was Scot Pollard, I would beg the NBA to remove the career higlights section from my player page. And if that didn't work, I'd start killing people. Because I'd rather be remembered as "hard-assed mass murderer" than "lame, cross-dressing basketball player." But maybe that's just me.

Anonymous said...
I was at that Late Night. He didn't propose to his girlfriend in "drag". The picture is from an earlier skit done with the Women's basketball team. It was hilarious!
6/16/2008 10:59 AM
Post a Comment
<< Home
Subscribe
RSS Feed
Mailing List