I know people like to joke about how dumb college athletes are. Sure, they get to take blowoff classes like Remedial Crayon Art and Intermediate Gum Chewing, and the hardest decision they have to make is which Teaching Assistant gets to do their homework for them, but that still doesn't explain why a player on the Seton Hall Pirates stole an inbounds pass and then drove and scored on his team's basket. 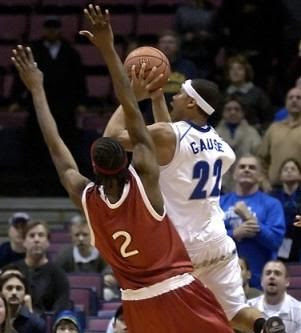 Wrong basket, you idiot.
The basket gave their opponent, the St. John's Red Storm, a seemingly insurmountable 20-point lead. But proving once again that you can't keep the stupid down, Seton Hall went ahead and surmounted it anyway, eventually winning 69-61 in overtime.

Freshman Paul Gause, the damn fool who scored against his own team, actually hit a shot at the buzzer to force overtime. So I guess he kind of redeemed himself. Although it's sort of like when Chunk accidentally ratted out the other Goonies to the Fratelli brothers, then saved them at the end with the help of a giant retarded man (no, not Shaq). Sure, it was heroic and everything, but it really wouldn't have been necessary if he hadn't been such an idiot in the first place. 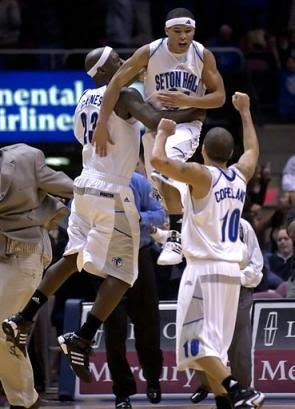 Word of the Day
Previous Posts
Shaq takes a bite out crime, donuts
Word of the Day: mustcanshoot
Dangerous Danny
A little Bird with your wine?
Dress like Manute
Word of the day: harmonism
The Impressive Answer for US Olympic Woes
Stu Jackson is so gangsta
It ain't easy being Scalabrine
Christmas with the Butlers