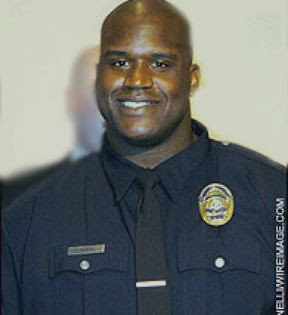 Sheriff Arpaio better order a lot of donuts.
Before you start making the obligatory Blazing Saddles jokes, let me be the first to assure you: Shaq is fully qualified to peform the duties of a deputy sheriff. He's personally watched more than 1,200 hours of old Dukes of Hazzard episodes (he describes Sheriff Rosco P. Coltrane and Deputy Enos as "personal heroes"), he actually spent time on the set of Police Academy 5: Assignment Miami Beach, and he even had lunch with Tommy Lee Jones during the filming of U.S. Marshals. Oh, and he once stalked someone for littering on a gay man. 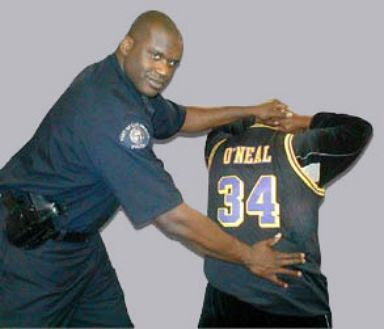 You have the right to remain silent while Shaq grabs your ass.
Crimetastic Update: Not a single basketball-related crime has been reported since Shaq's deputization. What's even more amazing, several previous crimes actually reversed themselves. I know you'll agree with me when I say: incredible! I haven't taken the time to crunch any numbers, but I'd say that's like a 1000 percent decrease in criminalistic basketball activities. Sheriff Arpaio and the rest of the Phoenix PD have officially taken the rest of the year off, and can be seen, right now, dancing in the streets.

Word of the Day
Previous Posts
Word of the Day: mustcanshoot
Dangerous Danny
A little Bird with your wine?
Dress like Manute
Word of the day: harmonism
The Impressive Answer for US Olympic Woes
Stu Jackson is so gangsta
It ain't easy being Scalabrine
Christmas with the Butlers
Word of the Day: smother chicken