Over the years, Larry Bird has been continuously associated with all things rural. As a former Hoosier myself, the name "Larry Bird" conjures images in my mind of various activities that are peculiar to Indiana-living: planting and raising corn, drinking cheap beer, eating corn-on-the-cob, cow tipping, sacrificing virgins to our savage corn gods...the list could go on and on -- and roughly 75 percent of it would somehow involve corn. But one thing I would never identify Larry with would be the drinking of fine wine. That's why it came as quite a shock to find out that the self-proclaimed "Hick from French Lick" is currently developing his own signature wine.

What kind of insane demographic study yielded the "Larry Bird should endorse fine wine" results? Seriously, the social scientist in charge of that research should have his Mr. Wizard Fan Club membership revoked right before he's covered in a few layers of biting insects. I'm not a statisticographer, but I don't need those number things to tell me that this venture is going to be a failure of Battlefield Earth-like proportions. Larry Bird fans are made up of three distinct groups of people:

1. Basketball purists: This group spends more time watching NBA League Pass than they do with their imaginary girlfriends. To these people, basketball legends are gods and TV is the altar at which they worship. However, years of exposure to ambient radiation from their televisions combined with an endless and mindnumbing array of Budweiser and Miller Light advertisements have transformed them into deranged, beer-addicted mutants.

2. Bostonians: During his time with the Celtics, Bird gained a cult-like following in Beantown. There is a story about how former Celtics General Manager Dave Gavitt was assualted by a littly old lady with a purse because she thought he was going to trade Larry Bird. He didn't, obviously, but he seriously might have been lynched if he had. Bird is bigger than god in Boston, and you'd do well to remember that. And, for the most part, Boston sports fans are of the hard-working, blue collar variety. They drink beer. Period.

3. Hoosiers: I'm going to let you in on a little non-secret: Hoosiers don't drink wine. They just don't. I mean, I guess they'll guzzle down a few bottles of Boone's Farm or Mad Dog 20/20 if the local Soupley's is out of Pabst Blue Ribbon. But not even the most generous vintner would mix the words "fine" and "wine" together in a sentence about those two drinks. If by some cruel twist of fate you ever end up in a bar in Indiana, for god's sake don't order wine. I guarantee the bar patrons will remove your foot from your mouth and jam it without mercy into your ass. 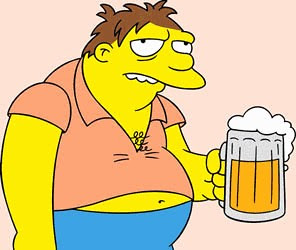 Hoosiers don't drink wine. They just don't.
Bullshit Alert: Jill Leone, Bird's representative, said "When [Bird] was retired from the Celtics he dabbled in growing grapes and so he's had an ongoing interest." Bird "dabbled" in growing grapes? Where?! The famous vinyards of French Lick?! I would sooner believe that Shaq studies Nuclear Physics in the offseason than accept the idea that Bird retired to study Viticulture.

Word of the Day
Previous Posts
Dress like Manute
Word of the day: harmonism
The Impressive Answer for US Olympic Woes
Stu Jackson is so gangsta
It ain't easy being Scalabrine
Christmas with the Butlers
Word of the Day: smother chicken
Grant Hill Furniture: breaking down in a store nea...
Jerome James should lay off the fatty foods
Quentin Richardson transformed into a cat