I've said it before and now I'll say it again: I love eBay. Where else could you buy a vintage warmup suit previously owned -- and worn!! -- by NBA legend and human swizzel stick Manute Bol? There's one day left in the auction and the current bid is only $280...so sweaty-former-Manute-Bol-clothes are well within your fiscal reach! Have I mentioned yet that my birthday is on February 7? I'm just sayin'. 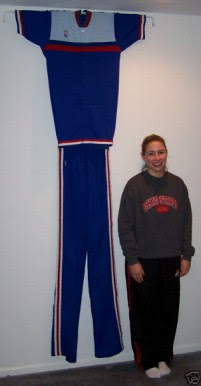 Wanna dress like Manute? I do.
I also did an eBay search for "George Muresan cologne." It didn't yield any results, which is too bad. If I scored the Bol clothes and some Muresan cologne, I could achieve a look and smell that most rodeo clowns can only dream about.

Craptastic Extra: The seller is a self-described "Manute Bol collector and historian." Yes, you read that correctly: a Manute Bol historian. Wouldn't Manute have had to, I dunno, actually do something historical to justify the existence of a personal historian? Being a Manute Bol historian is like being a midget trainer at a circus with no midgets. It would take a miracle of time and space for you to ever get a chance to do your job.

Anonymous said...
"At 15, the Dinka herdsman killed a marauding lion with his spear while it lay sleeping – a feat his agent noted during his contract negotiations."

You say he never did anything?!

"At 15, the Dinka herdsman killed a marauding lion with his spear while it lay sleeping – a feat his agent noted during his contract negotiations."

Word of the Day
Previous Posts
Word of the day: harmonism
The Impressive Answer for US Olympic Woes
Stu Jackson is so gangsta
It ain't easy being Scalabrine
Christmas with the Butlers
Word of the Day: smother chicken
Grant Hill Furniture: breaking down in a store nea...
Jerome James should lay off the fatty foods
Quentin Richardson transformed into a cat
Word of the Day: fundamentivity