Lawyers can get you bags of free money for your minor injuries or hurt feelings, and all it really requires is for you to act like a retard for 15 or 16 months. That's why attorneys are considered nature's clown suits. Every corner and exposed bolt in our country that isn't covered in culturally ambiguous bubble wrap is a potential lottery ticket for the clumsy and stupid. In fact, according to the numbers I crunched on my Little Professor Calculator, by late 2008 all of the world's money will be in the hands of lawyers and crybabies.

Legal Disclaimer: Neither the Little Professor Calculator nor myself are certified as experts in speculative financial projections, and both are possible choking hazards.

The latest crybaby to scream "I'll sue!" is

Chicago's very own Michael Axelrod, whom you didn't know before as the son of prominent Democratic political consultant, and whom you don't know now as the man who got assaulted by Antonio Davis' fruitcake wife Kendra at a recent Bulls/Knicks game. And if you've never seen a man afraid for his very life, here's your chance: 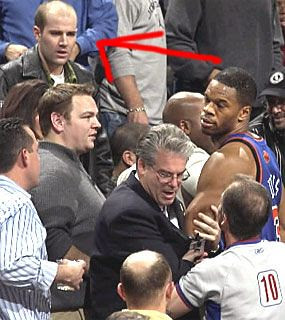 "Please God, don't let him find me..."
According to the latest reports, Kendra cursed at Axelrod, poked him in the face, and almost caused her gigantic husband to beat the living hell out of him. I'll be the first to admit that the thought of getting pounded by Antonio Davis just caused me to pee myself, and I wasn't even in at the game. But that was it. That was the worst that happened to him. At most, Axelrod should be asking for an award of $50 for a new pair of pants. But of course he wants a little something extra for the emotional trauma. You know, about $999,950 extra.

Is a million dollars really worth the public embarassment and loss of pride associated with a possible lawsuit? Axelrod certainly thinks so. Otherwise, he never would have posed for this picture, which was on the front page of today's edition of the Chicago Sun Times: 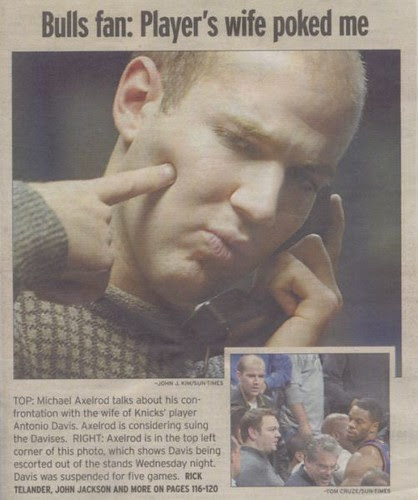 Holy nut-shrivelling embarrassment, Batman!
If this isn't the most pathetic thing you've ever seen, then you've been living in the Care Bears village. A grown man, an ugly man, a 22-years-old-yet-almost-completely-bald man, whining on the front page of a major metropolitan newspaper about how a player's wife poked him at a basketball game. He obviously never expects to have sex with a woman again. Although, assuming he wins the lawsuit, I guess a million dollars would buy a lot of prostitutes. But his pride...that's something he can never buy back.

Bitchtastic Extra: Yesterday, I went against the grain and suggested that maybe, just maybe, Davis charging into the crowd to protect his wife was a little less than heroic. Could Kendra be the true culprit, I wondered? Today the answer seems to be a big, fat "Heal yeah, shitmonkey!"

Several anonymous Bulls fans who attended the game have come forward and pointed the finger right at Kendra Davis. Apparently, she not only instigated a confrontation with Axelrod for booing a call, she was arguing with another fan by the time the shit really hit the fan. Oh, and security was already on hand long before Antonio stormed into the crowd; Axelrod had called them over for his own protection. From Kendra. So much for Davis' brave fight for his family's safety.

Of course, now stories are pouring out about what a nutjob Kendra is. She's been abusing fans, the media, opposing players, and even Antonio's own teammates for years. Man, and I thought Doug Christie 's wife Jackie was crazy.
1 Comments:

Anonymous said...
"That was the worst that happened to him. At most, Axelrod should be asking for an award of $50 for a new pair of pants. But of course he wants a little something extra for the emotional trauma. You know, about $999, 999, 950 extra."

Apparently some people don't mind embarassing themselves in a public forum. Oh, I'm not referring to Mike but to your AWFUL grasp of the difference between one million and one billion dollars.
1/20/2006 3:57 PM
Post a Comment
<< Home
Subscribe
RSS Feed
Mailing List

Word of the Day
Previous Posts
Word of the Day: Artestean
Bowling with Brian
Danny Fortson is sad. Let's cheer him up!
Antonio Davis: Threat or Menace?!
Word of the Day: espacular
Pacers visit United Center. Escape with a win and...
Jeanie Buss has a problem. And it's not named "Phil"
Word of the Day: project
Bill Simmons better stay off the streets. Isiah's ...
Kobe and Shaq share a Hallmark Moment