In what might be the lamest rebuke in basketball history, Lamar Odom called Gary Payton a "disrespectful young man" in response to the washed-up guard's endless stream of trash talk during the Heat's 97-92 defeat of the Lakers. 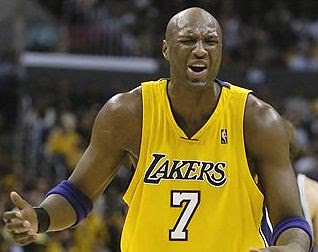 The victim of Payton's ill-mannered bon mots
When asked about the technical foul finally called against Payton, Lamar continued, "I was the victim of some of Mr. Payton's more tasteless parodic jests. Despite repeated appeals to his better judgment and several stern appraisals of disapproval, Mr. Payton, a foppish dandy of eccentric reputation, disregarded the league-appointed constabulary and continued his ill-mannered conduct, which was most irregular and boorish.

"The referees, who were extremely offended by the snubbing, assessed to him a technical foul for acting in poor taste, looking down his nose, and playing the inappropriate role of a prima donna."

Word of the Day
Previous Posts
Ah, that coaching magic
God has spoken
"Oh yeah?! Well you cheated on your wife..."
A Stern admonishment
Basketbawful History: Sir Miss-A-Lot
Stockton 2.0
"I was just kiddin' guys..."
A most gratifying dump
And now for something completely different
Con Artest