God, sometimes it just feels so good to hate Kobe Bryant. When I woke up this morning and saw this picture, I thought Christmas had come again... 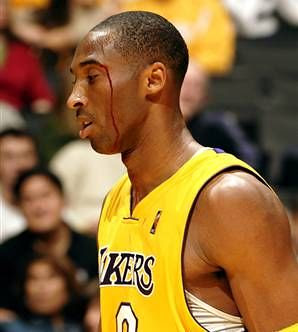 Awh...did little Kobe get a boo boo?
Apparently, Mike Miller unintentionally whacked Kobe in the head during the Grizzlies' 100-99 overtime victory over the Lakers. Of course, Kobe got all tough guy and later drew a flagrant foul for elbowing Miller in the throat as Mike drove to the hoop. Said Kobe: "Any player that was going to come down the lane at that point in time, I was going to let him know that he just can't walk through there." Yeah, it's funny...I don't remember Kobe committing a flagrant foul on Shaq a few days ago when he was walking into the lane and dunking all over Chris Mihm. Probably because he knows he'd have ended up in a bucket somewhere labeled "What's Left of Kobe Bryant."

Anyway, Kobe continues to jack up the ball at an unprecedented rate. He's like that drunk guy at the bar who thinks a girl will go home with him if he just keeps buying her drink after drink. He was 13-37 last night, with 19 [!!] free throw attempts, meaning he shot the ball almost 50 times. Imagine if he hadn't had to leave the game to get stitched up. He might've taken 60.

Funtastic Extra: I just had to include this incredibly gay picture of Kobe wearing tights and leaping through the air. Does this picture make any sense to anybody?! Even the ref has a "WTF?!!" look on his face. 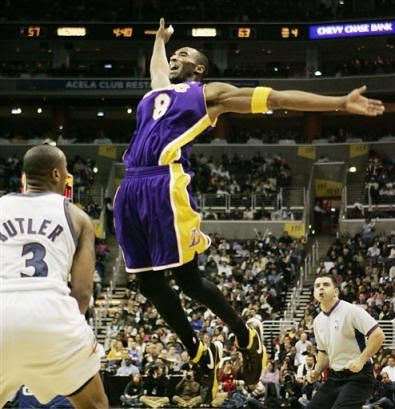 "I soar on the wings of my dreams."

Word of the Day
Previous Posts
Who says the NBA has an image problem?
Shaq vs Sumo matchups Pat Riley should consider
Men In Tights
A real man's man.
Ouch, Lamar. Your words cut like a knife.
Ah, that coaching magic
God has spoken
"Oh yeah?! Well you cheated on your wife..."
A Stern admonishment
Basketbawful History: Sir Miss-A-Lot