Tuesday, November 22, 2005
Jason Williams: Illustrating why kids should stay in school
By Basketbawful at 1:04 PM
0 comments

Miami Heat point guard Jason Williams was one of the first NBA players legally declared "retarded" by the world's leading Zoologists. But while it's obvious that he's an idiot, what has been less clear is why. Basketbawful research assistants have been working around the clock on this one, and we are proud to present our findings.

J-Will was kicked out of Florida University. Not too surprising, I know. But what is mildly shocking (although, at this point, it probably shouldn't be) is how he feels about his time at the U. A reporter recently asked him to reflect on his time as a Gator. This is what he had to say:

I cherished getting kicked out of school. It was a great thing. I became a millionaire.

This is why it's dangerous to give stupid people lots of money. 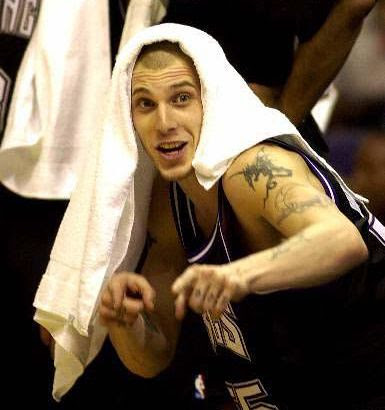 Kids, this is what happens when you get kicked out of college.

Word of the Day
Previous Posts
Hey K.G., be a man. Tell us what you're really thi...
Kobe: Still basketbawful
Pistons are 7-0. I'm not impressed. Yet.
Another reason why I love Karl Malone
"It's not always a thumb..." -- Doug Collins on Mi...
Not so fresh and so clean
Gentiles can't jump
Things to buy if "Tattoos of the NBA" is sold out
Life imitates pro wrestling: case study #389308-B
Stupid people always have stupid things to say