Holy Shit, that was crazy. First Dwight says he’s going to Houston, then he’s going back to LA, then he’s 50/50 on LA and Houston, then he’s meeting with Kupchak, then he’s not meeting with Kupchak, now he’s going to Houston…for real this time. Dwightmare. Dwightgate. Dwightpocalypse. It’s over. He’s chosen to play for the Houston Rockets. Not really a shocker I suppose. Kobe was basketball’s version of Joan Crawford. He even reportedly told Dwight during his recent meeting with the Lakers…”Let me teach you how to be a champion…” What a prick! If Dwight didn’t already have his mind made up about leaving I’m sure that helped nudge him out the door. Leaving the Lakers shouldn’t have really been a tough decision however. Kobe won’t be back until February, maybe. Steve Nash is decrepit. And D’Antoni…Oh D’Antoni. He’s got all the coaching savvy of banana pudding.

Dallas got a seat at the Dwight poker table. Problem is, our their main pitch was something along the lines of, “Hey Dirk is old, but he’s ready to hand over the keys to the franchise. And in 2014, we’ll have a microscopic chance to get Lebron, maybe…probably not………PLEASE COME TO DALLAS!!!... DON’T MAKE ME GO ALL DANNY AINGE ON THE MAVS……….. DWIGHT!!!......
DWIIIIIIIIIIIIIIIIIIIIIGHT!!!!” The Warriors looked like they were about to land Dwight, but suddenly remembered they were the Warriors. Good things never happen to them. They went ahead and signed Andre Iguodala. And the Hawks, HA…their meeting probably lasted all of five minutes. 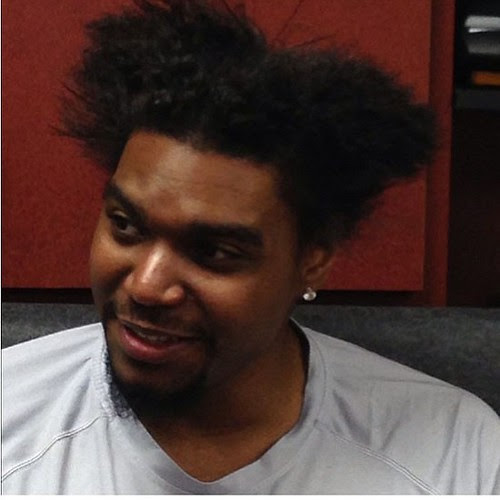 Now Howard teams up with James Harden. It made sense. Harden is a rising star, Kevin McHale is a player’s coach, and I’m sure Hakeem Olajuwon promised free post move lessons for life. The spotlight won’t be nearly as bright in Houston. And I don’t think I’ve ever heard James Harden speak. He should slide right in without any problems. In fact, McHale is probably the best type of coach for Dwight. He’ll do whatever he has to in order to make him happy. If Dwight says, he needs more touches; he’ll get ‘em. If Dwight says they need to slow the game down; they’ll play at a snail’s pace. If Dwight says he needs extra back rubs on Tuesdays; McHale will be standing there, body oil in hand. 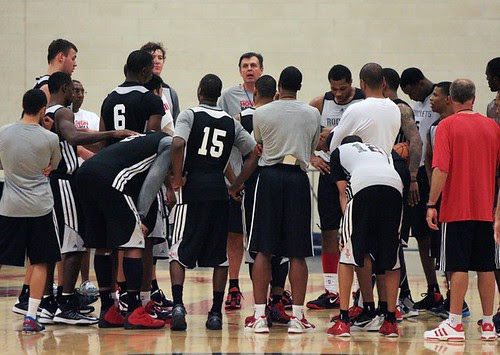 I'm gonna have to cut practice short today. Dwight needs someone to wash his car.

The Houston has a really fast paced offense, but more than likely they’ll slow it down to accommodate Howard. The Harden/Howard pick n roll combo should be deadly in half court situations. Chandler Parson is able to shoot the three, which will help spread the floor. And it looks like they are putting the finishing touches on a deal to bring back Francisco Garcia. They’ll need to sign or trade for a few more perimeter snipers in order to take advantage on their inside game. I’m hearing rumors that Houston may try to get Josh Smith from Atlanta in a sign and trade. That would make sense seeing as how Omer Asik has made it be known he has no intentions of playing behind Dwight Howard. Yes, Omer Asik has demanded a trade. I think there should be some ground rules in place before guys can demand trades. Like, I shouldn’t have to Google your name in order to remember what your face looks like. Just saying. 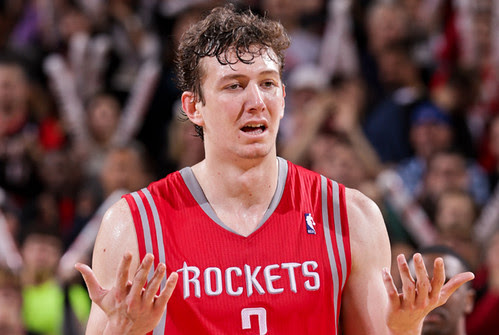 I just want to belong.


One this if for certain, there are no more excuses. Dwight chose this team, and in a sense the coach and the teammates. His disappointing season Los Angeles will be a distant memory if he can return to superstar form. Winning is not an option, but an expectation. Make no mistake; his legacy is at stake here. Whether it’s fair or not, a player’s greatness is measure in rings. The ball is in Dwight’s court. Let’s see if he can step up to the challenge.

Glenn said...
Good work Jason. That altered Chris Childs gif is hilarious. Now, much like when Shaq left, I'm waiting for their first on court confrontation after the break up. Will a somewhat diminished Kobe still find away to dunk on Howard? Or will Howard slap his layup into the first row as Kobe crumbles with another blown achilles? Only time will tell.
7/08/2013 11:31 AM

Wormboy said...
No wonder PJ Brown threw Chris Childs into the stands. Throat punch? Dude. Almost as bad as Dwyane Wade. But, you know, not the elbow. And not a sucker punch. And not in open court while the play is 30 feet away. Yeah, OK. Dwyane Wade really is the douchiest guy in the NBA.

You know, I think people are underestimating Dwight. Look, I don't like the guy. But last year he was coming back from major back surgery, playing with a totally discomboulated team playing with the wrong coach and wrong strategies, Nash was gone much of the season, and playing with the 20+ shots per game Kobe. Did anybody really expect Dwight to throwback a couple of years?

I think Houston is making a good gamble. If they can pick up that third guy, this team could be an impressive contender. Contrary to popular opinion, dominant centers are not "done"; three of the final four teams featuring dominant big guys proved that. The "team of the ages" Heat squeaked by the undermanned Pacers in 7, and the ancient Spurs (with Manu playing like utter shit except for game 5) in 7, including asking the Spurs to coach up a hairball in game 6 to actively piss away a championship. Yeah, big guys aren't done.

As long as Dwight has his athleticism, he's a force. Frankly, last year's 17+/12+ season will see improvement this year, which is a heckuva thing. Are we talking 20-25 ppg and 15 boards? Dayum. THat is completely reasonable.

So it comes down to Houston getting that third guy, a real quality guy, and Dwight meshing with the rest of the team. Make no mistake, Dwight Howard - your legacy will be defined this year. You don't need to win a ring, but you need to work with coach and team to maximize your potential and theirs. No prima donna shit, right? You can do it, but will you?

Other questions: who is that third guy? I have my doubts about Josh Smith. Who else is out there? Do they need to trade Asik to make it work? Asik's head seems screwed on straight. Can they convince him to play a two-headed monster at the big? That could be a helluva beast if they do it right. It worked for Bynum/Pau/Odom with the Lakers before Odom went candy/Kardashian, Bynum went Lady Gaga, and Pau resembled a penis on ice (think about that imagery). If all the big are all in, Houston could have the best front line in the NBA.

Harden is in, I think. Dude wants to win, and he can alter his game. I think he runs fewer pick and rols and more post plays with Dwight, while Dwight increases his pick and roll game: they both find a middle ground. But this leads to the coaching question. Can Kevin McHale make it work? Dude has the big man rings to convince the bigs, but does he having the coaching chops? He has worked with a shit sandwich in Minnesota. Can he make it happen in Houston? Can Matt McHale break his silence and comment? Why isn't Matt McHale featured more often on ESPN? We need D Rose to get the hell back on the court, rock it, make Chicago relevant, and bring Matt onstage to strut his blogging chops. We're rooting for you, Matt!

Back on topic: ultimately this comes down to Dwight, fair or not. He needs to make this work, and he can't do so through individual talent alone. This is a referendum season, Dwight. Your legacy is decided here. Stay healthy, stay cool, and make your teammates better. If you do so, the Force will be with you.
7/08/2013 4:23 PM

Anonymous said...
Looks like the Lakers are going to amnesty the Metta World Peace and sign Chris Kaman (that'll make up for losing Dwight).
7/09/2013 2:34 AM

Anonymous said...
It's a shame when you have to google someone's name who is ranked:

Barry said...
Uh-oh, Josh Smith just pulled a Devin Harris and said that Detroit will be in the playoffs.....and Sheed is their new assistant coach!

Wormboy said...
That seals it. Detroit is doomed.

Big-UpsTo#15 said...
I've been sending your "You've been Ginobili'd!" video to all my friends that are Spurs fans (I live in Austin, TX so there is a lot of 'em) for the past half decade.

Wormboy said...
Worth noting: the decline of the ESPN message boards could rejuvenate basketbawful, provided you guys actually posted something 3 times a week. If you had 3 or 5 writers, it shouldn't be too tough to go with a couple posts per week in the summer and 5 per week in the regular season.

But most of what killed the place is going through the playoffs with one or two posts per week. That's when interest is at its highest, and you've got to have a post every day to keep people coming.

I'd volunteer myself, but I'm starting my own lab in the Fall and may disappear entirely. Hats off to all you fine people, especially our fearless leaders Matt, Evil Ted, Dan and others. I've enjoyed the community! Small but energetic is just right.
7/17/2013 2:36 PM

Even the most optimistic Celtics fans would be happy with about 41 wins this season – meaning Boston would also lose 41, two more than Butler dropped over the past four seasons combined. That will provide a tough adjustment for Stevens. He's never dealt with losing and he's so competitive, his wife Tracy recently told the Boston Globe, that he turned their first vacation as a couple into a string of contests (and never let her win any of them)
7/25/2013 8:47 AM

Anonymous said...
I'm with wormboy for the most part. First, Bawful was supposed to post for the playoffs, which lasted all of ten minutes. Second, what kind of pissed me off is that Bawful disappeared without so much as saying he was done with the site, not Hitler level awful, but still pretty douchy. Third, it is sad that not enough people have stepped into the void to pick up the slack. Like wormboy, I would volunteer but I lack the comedic writing talent(in case you can't tell)that made this site so enjoyable. So, with this venting of sadness and frustration, I bid Basketbawful adieu. It was fun while it lasted.
7/25/2013 12:29 PM

Raza said...
In regards to 'Bawful himself not announcing a final goodbye, he was going through some hectic personal things in his life which were obviously far more important than having a farewell tour on this blog.

As for the lack of posts on this site, yes it is unfortunate.

I'm working on a free agent round up (gifs galore people!) and will personally be making a much more concentrated effort to keep up with the posts at least every other day during the regular season.

I know it's very frustrating for those of you remaining who check in on the site but I promise that a better effort towards keeping up with the posts will be made. Sometime real life gets in the way of what is a fantastic hobby. It sucks but it is what it is.

Anonymous said...
There was no need for a "farewell tour", it could've been done in two sentences. "I won't be able to contribute to the blog anymore. Thank you to everybody for reading and supporting it." How hard is that?
7/25/2013 2:46 PM

Evil Ted said...
Got a video coming out soon...and a notion that may revive this blog...I won't have to keep anyone posted. It'll just happen...