I figured that I would stay with the So Cal theme from last week and discuss the other Los Angeles team. The Clippers extended Blake Griffin, they brought back Chauncey Billups, and they brought in Jamaal Crawford. They swapped out Nick "Swaggy P" Young for Grant Hill. And maybe, just maybe, Lamar Odom can crawl himself out of his funk. Yes, by all accounts, this was a very good off season for the Clips. But it’s funny, no matter how many improvements the Clippers make, the Lakers ALWAYS seem to 1 up them. With the arrival of Dwight Howard, The Lakers figuratively put their hand on the Clipper's head and ruffled their hair. The Lakers are the handsome, successful older brother with a PHD and the model wife. The Clippers are the fat sibling with an under bite and a bankruptcy. I feel bad for Billy Crystal and the rest of Clipper nation. They just can’t win. However, I'm impressed with the moves the Clippers have made. Donald Sterling has dusted off the old checkbook and seems to actually care about...winning. (Donald Sterling and winning in the same sentence. Wow, can't believe I just typed that...I feel weird.) 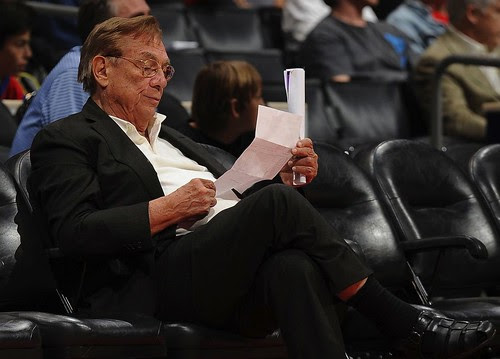 $5,000 in one month for Gatorade? Can't these guys just drink water?

Despite what Vinny Del Negro believes, Chris Paul cannot simply do it all by himself. One of the issues in the last year was that CP3 simply wore down. Now that Chauncey is back in the fold, things should be easier for him. For example, in March, they'll play the Mavericks on a Tuesday, and then they have to fly to New Orleans and play the Hornets the next night. In theory, Chris could take off the second night and let Billups slide over to the point. The added rest should help preserve CP3 for the playoffs. If I'm a Clipper fan I'm not overly concerned with Blake Griffin's torn meniscus. By all accounts he should be ready to go by training camp. The main downside to this is that Blake won't have the opportunity to improve his jump shot or his post game this summer. Which, with all his pump fakes, pivots, and body contortions, makes him literally resemble a fish out of water. 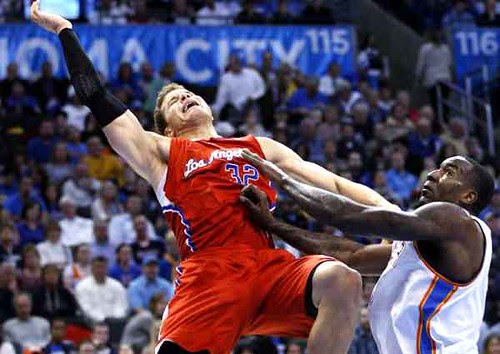 Size up. Pivot. Up and under. Double Pump Fake. Step through....Two Points

I’m kind of disappointed in Mo Williams. Last season he was in the perfect role for him. The Clippers needed his scoring off the bench, and while he did provide that at times, he never fully embraced the job. Last summer I had him penciled in as the next 6th man of the year. Now that he's been shipped off to Utah, the Clippers will utilize Jamaal Crawford for this role. Crawford, a former 6th man of the year himself, will be more than happy to provide the needed scoring punch off the bench. With the departure of Nick Young, and the arrival of Grant Hill, the team’s perimeter defense and overall basketball IQ should see a dramatic spike.


Even with all these changes, if Deandre Jordan and Ryan Hollins can't catch and dunk from their spot on floor, the Clippers will get little to no offense from the center position. And while I am a fan of Caron Butler the person, I can't say the same for his game. A typical possession from him includes: Catch and hold the ball for 2-3 seconds, jab step, jab step, two dribbles towards the goal/baseline, pull up jumper. He's Carmelo without any of the good stuff. Del Negro has got figure how to score in the half court. If the Clippers come out of the gate struggling, he'll be out the door and look for Sterling to elect Chauncey Billups to the first player/coach role in the NBA since Dave Cowens. In short, the Los Angeles Clippers have made fantastic moves this off season, yet somehow, they will end up right where they were last season. Right in the middle of the playoff pack looking at a 4 or 5 seed. 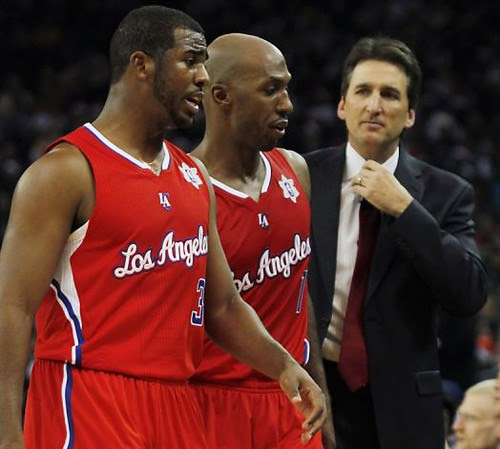 Anonymous said...
The three things I loved most about Bawful's writing:
1. Writing was snarky and sarcastic.
2. Random links and videos peppered throughout post.
3. The captions on the pictures.

JJ said...
Caron Butler - "He's Carmelo without any of the good stuff." Haha, that made me laugh. In his defense though, he doesn't have Melo's bad stuff either. =)

Despite their weaknesses, Clips have a pretty good team. I think another 2nd round exit is reasonable. And maybe (a very unlikely maybe) Conference Finals is a possibility if they get lucky, especially if they struggle in the beginning so Del Negro can be let go and they can get a real coach.
8/21/2012 11:13 AM

Wormboy said...
Great stuff, Jason. And don't be afraid to steal old Matt McHale's material. For example, "I feel weird" should be "I think I just threw up in my mouth a little" or "hallucinations from ingested rye fungus ergot is thought to have contributed to the Salem witch trials. Hmm, I had a rye sandwich at lunch. I'm just sayin'."

Keep up the good work, Jason!

In other news, I can't express how much I love the fact that the NBA's premier big men are going to Hakeem Olajuwon to, you know, learn how to be real big men. Do you think he can teach them to work hard on their game all of the time? I'm not sure that a week of "Dream camp" can give somebody the world's least defendable shot or make you the best shot blocker in league history.

I wonder if LeBron will go. Because commentary from the NBA lickspittles, er, announcers to the contrary, LeBron still has a low post game of two moves that a lot of high school big guys have down pat. He's still a perimeter slasher. All of the beefy PGs in the game have a better low post game than LeBron. The fact that he doesn't need it matters right up to the point where he gets a bum wheel and there's no explosiveness. We all know how bad LeBron can suck when he settles for 20 foot fadeaways. Some low post footwork would make a world of difference then, and could also be the difference of a couple rings and admission to the pantheon.
8/24/2012 12:08 PM

Anonymous said...
"With the departure of Nick Young, and the arrival of Grant Hill, the team’s perimeter defense and overall basketball IQ should see a dramatic spike."

Let's save a little bit of space.. hmm: