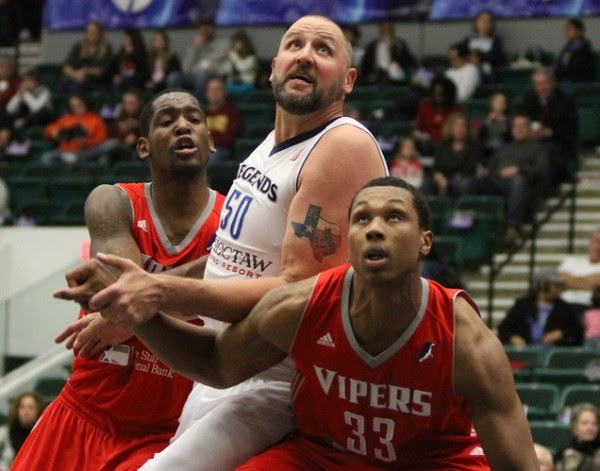 I could not have possibly said it any better than Basketbawful reader Joe did in yesterday's WotN comments: "If anyone needs me I'll be at home lying face down on the floor with only the occasional wracking sob to indicate that I'm still alive."

Said past, present, and future Basketbawful mascot Greg Ostertag: "They've been bugging me since I came back (in late December), but I could barely move (after Reno). I felt good there and I played good. I get out there and sometimes I do get loose, but usually the 'don'ts' are longer than the 'dos.' It sucks, but I knew going into this what could happen.

"I regret quitting when I did. At that time, it wasn't so much playing. I was tired of everything that goes along with it, like the travel, not being able to fall asleep before 4 or 5 in the morning. I was tired of all that, but I should have kept going for a couple more years.

"I hope people understand that this was not a publicity stunt. I genuinely wanted to play basketball. The first couple weeks, I thought I was playing decent, but I just wasn't in shape. I was starting to get in shape -- as far as conditioning I felt as good as I've felt (Wednesday night against Tulsa) -- but I just can't move the way I need to. These guys are young and fast. Some of them were just getting out of diapers when I came into the league.

"My mind was going a million miles an hour. I just realized it was time to hang 'em up for good."

The Los Angeles Lakers: This may have been the signature play of the game:


Or maybe it was this one:


The stat of the game? I suppose it could have been Kobe's 8-for-21 shooting performance or L.A. going 6-for-20 from downtown. But to me, it was the fact that Darius Morris logged 18 minutes for the Lakers. And that's after the near whitewash they have coming off the bench (Jason Kapono, Josh McRoberts, Troy Murphy).

Another fun stat from the AP recap: "Bryant had as many field goals in the opening 24 minutes (one, on eight shots) as Heat forward Eddy Curry (1 for 1), who got his first NBA action since December 2009 when he checked in late in the first quarter for a 2½-minute stint in which he made a basket, grabbed a rebound, was charged with a turnover and got a pair of loud ovations from a sellout crowd."

Despite Kobe's recent throwback string of 40-point games, are the Lakers a championship team? It sure didn't look like it last night.

Said L.A. coach Mike Brown: "They were the aggressors on both ends of the floor until the last few minutes of the game. We were aggressive the last six, seven minutes. You can't go over a 48-minute game against a team like this and allow them to be the aggressor for most of the night."

Of course, Kobe has other ideas...

Kobe Bryant, quote machine: "We might want to go back to some of the things that we were doing a few weeks ago in terms of me being on some spots on the floor and things where I'm most comfortable."

Translation: We're better when I'm scoring 40 points. GIVE ME THE BAAAAALLLLLLL.

Mike Brown, quote machine: "I had a great time coaching LeBron. I wouldn't be in this suit if it wasn't for him."

And he might still be in a Cleveland uniform if not for you, Mike.

Eddy Curry, quote machine: "Felt great. I didn't know what to expect. I've been working hard for this moment. This is only the beginning."


The Houston Rockets: No. No, I do not care if they won. The Rockets were guilty of some of the bawfulest ball the modern world will ever know.

As Basketbawful reader Silvio put it: "Rockets scored 8 pts in 15 minutes, Q4 + first 3 minutes of OT. After Houston scored 58 in 1st half, they simply stopped playing, in those 15 min they went from +12 to -5. They played like they're actually payed to lose ... more precise, they looked like this seasons' Washington Generals."

Monty Williams, quote machine: "I always tell them, 'Give the fight and do your best. We did everything we could to win the game."

Dude. Your team shot 39 percent from the field. Everything?

Luis Scola, truth machine: "We weren't executing the right way. They came back, and that's what happens when you don't play good."

Jason Smith, hope machine: "I'm only taking positives from this game. We played hard and that's what we have to do every game to give ourselves a chance to win."

All Jefferson, quote machine: "It's for sure we got fight. We got to get that reputation around the league that we're not going to be pushed around. We're going to fight to the end. Dallas may have won the game, but they know they were in a fight."


Shaq, clownin' machine: To the video:

Lakers-Heat: Josh McRoberts muddied two boards and assists in 12:49 with a brick, two turnovers, and two fouls for a 4:2 Voskuhl, while Andrew Goudelock spent 52 seconds at GameStop for a Mario.

Hornets-Rockets: Gustavo Ayon stung his way to the ledger by a foul in 2:24 for a +1 and 1:0 Madsen-level Voskuhl.

Houston's Jeff Adrien can now afford a lavish, expensive party for Clutch the Bear after gathering up a 3.75 trillion (3:46)!

Mavs-Jazz: Brian Cardinal wiped the floor with one foul in 146 seconds for a +1.

Matt said...
Sure, LeBron might have had the better stat line and the Heat might have won, but did you see how CLUTCH Kobe was down the stretch? 14 points in the 4th while James was 4-12 in the 4th! Take that 'Bron! That's why you don't have a ring - no killer instinct down the stretch when you're down 22!

Anonymous said...
Well, the Lakers ARE better when Kobe's scoring. That's been proven. They win or are in the game until the very end when he's going off for 40+ this season. It's not his fault something called a Darius Morris is on the team.
1/20/2012 12:35 PM

Czernobog said...
The Clippers will be in the finals.

Silvio said...
Kobe scored 37+ points vs Rockets, Warriors, Suns, Jazz, Cavaliers and Clippers.
When playing versus teams that actually play defense (like Heat and Mavs in last 2 games), not so.
It's not that when Kobe scores 40+ Lakers win, but rather that Kobe tries to score 40+ every game, then succeeds versus lousy defenses and LA wins. But versus better defenses he drags team into losses with forcing the issue.
Key stat: when Kobe shots less than 45%, Lakers are 2-3 W-L. In other 11 games, they're 8-3. In most of those 8 games, one could put Keith Bogans at SG and still win those games, there was never more bawful teams in the league.
1/20/2012 4:20 PM

Naz said...
The only thing I love more than Lebron James and the Heat winning is when Kobe Bryant and the Lakers lose

And...am I stupid (can't find it) or has nba.com really cancelled all day/week/month passes? Being from Europe, I just don't feel like I can watch this stuff regularly until the end of the season...and 100 something bucks is too rich for my blood.

If it's that they (nba.com) don't want us euros to watch some games some days for a price, then it's BAWFUL MARKETING and deserves some notice. If it is me who can't find those shorter league passes, I deserve notice as a failure. Anyways, I'd contribute some bawful to the site. (Sorry for my not-so-prfect english)
1/20/2012 7:58 PM

JohnSmith said...
Seems like the NBA is really filled to the brim with money. Why the new CBA then? Assholes.

NBA.TV: Hello, how may I help you?
AV: are there no day/week/month league passes any more?
NBA.TV: no am I sorry but the NBA is only offering the full season this year
AV: I'd gladly pay to watch good basketball, but being from europe, I just can't be up EVERY night
AV: too bad
NBA.TV: I understand, the games are both live an archived
AV: a marketing error
AV: I did have a few month passes last season and I enjoyed them
AV: Just...most of us can't afford the whole season
NBA.TV: Did you have any other questions at this time>?