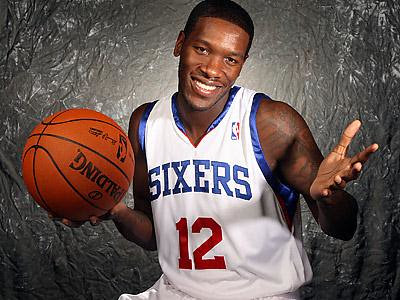 Royal Ivey. Not to be confused with the ivy that grows on royalty.

Thanks to the complete and total lack of NBA-related news, this is one of the few chances for a lacktion ledger regular like Royal Ivey to be interviewed by Jonathan Abrams for an article on Grantland. He's going back to school like Rodney Dangerfield! (Except he's, you know, still alive.)

“I actually just signed papers to become an undergraduate-student coach, so I’ll be helping out this year.”

Huzzah! He's teaching the next generation of players how to effectively fill out an NBA roster by having a career average of 3.5 points per game. That's important. Someone's gotta be that guy who plays for five teams in six years. (Well, assuming we ever see another NBA game played in our lifetimes.)

Grantland:Do you get any double takes from students or teacher by being in class again?

"Seriously? You think people recognize me? Even I don't know what I look like! I always have to carry around this GQ article Profile in Obscurity about me!"

Flud said...
Are you sure that's a photo of Royal Ivy? Doesn't look anything like I thought he did.

Dan B. said...
Thank you for proving my point that nobody knows what the hell he looks like. :) Yeah, that's him. Compare it to this ESPN headshot. It's the goofy pose and studio lighting and lack of facial hair (he usually has that chin patch thing going these days) that make him look different.

And yeah, I'm already getting lacktion withdrawls. Starting to think I may need to find some way to keep us entertained with crappy virtual basketball when NBA 2K12 comes out in a few weeks...
8/25/2011 5:34 PM

Evil Ted said...
You know you're a big deal when:

Someone takes the time to wrinkle up a giant, shiny, gray sheet for your photo shoot backdrop.

Thanks for pitchin' in, DB.

I laughed for a solid minute when i heard the gang's name.

About what you said before in regards to the 2K12 entertainment,
I'd love to see some more of that personally, and I thought the 2010 Null-Stars Game that you guys did with 2K10 was pretty entertaining.
As we all know by now, virtual basketball can be pretty bawful.
Just throwin' in my two cents to help with the ideas, so all of us Basketbawful fans can get through the lockout.

So go out, shoot some ball, grow a lockout beard and watch Space Jam on NBA TV.

Anonymous said...
I actually did miss this! Thanks for the link, I'll be watching it.
This roster puts 2010's to shame.