Tooth reads from a computer printout.

“‘Ever tried. Ever failed,’” he says. “‘No matter. Try Again. Fail again. Fail better.’” He folds up the paper and looks around at us, profound meaning in his eyes. “A quote by Samuel Beckett.”

“No, that was Samuel Clemens,” Tooth says. “But the fact that you knew Mark Twain is a pen name is astonishing. So…you get points for that.” Tooth focuses on me. “What I’m saying, Doug, is…you failed better. You accepted the Celtics’ fate and were mature and gracious for your son.”

I’m not buying it. Tooth can tell.

Tooth doesn’t get it.

I nod. A quiet chorus of groans wafts through the room.

“Is there a lot more?” Patch says, “because I want to get back to talking about myself soon.”

“One more stop,” I say. “Kansas City. My sister’s family lives there.”

“Are they vampires?” Patch says.

“Werewolves?” Bandana asks. “We haven’t had a good werewolf attack yet.”

“What about machine-generated cyborgs who have travelled back in time to kill the future leader of the human resistance?” Patch says.

“You just described Terminator,” I say. “And no.”

“Well, maybe the machines failed with brute force, they tried to infiltrate the human resistance with terminator spies that age like humans,” Stache says. 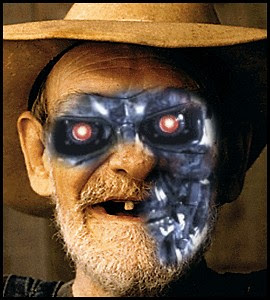 Come with me if you want a great buffet.

I raise an index finger. “Uh…one question,” I say. “If the machines are going to try to infiltrate the human population, don’t you think they’d create a terminator spy that doesn’t look like Arnold Schwartzenegger, the same guy who’s been tormenting the humans forever?”

"The machines did figure that out," Patch says, looking disappointed that the idea is falling apart. "In the first movie, there was a terminator ripping up a human hideout, and it wasn't Arnie."

“Maybe the machines only have one mold left,” Stache says. “One prototype human mold.”

This revives Patch, who doesn’t want to abandon the thrilling notion. “Yeah, one mold,” he says.

"And that mold now looks like an old Arnold Schwartzenegger," I say.

Stache fires me a resentful look. "You're a real buzz kill, you know that?" he says.

"I'm sorry," I say. “I just didn't know that making a Terminator is like using play dough.”

A cow appears in the center of the circle. It stands in a lumpy mass of manure, its legs blackened by the stuff up to its knees. The smell is instantly horrifying.

“Must be Nebraska,” I say. “Fiona said the entire state, and I quote, ‘Smells like cow butt.’”

“Can we proceed to Kansas City, please?” Patch says, his eye watering.

The cow is gone, replaced by a single dinner plate resting on a large table.

“Tell me,” I say to Patch. “Did you know Kansas City has bugs in the water?”

I stand and approach the plate, summoning Patch to do the same. He does.

“They’re miniscule,” I say, leaning over the puddle of clear water that fills the plate’s inner circle. Patch mimics me.

“Can you see them?” I say, each of us only inches from the water.

“No,” Patch says, sliding his head this way and that, trying to locate the bugs against the overhead cafeteria lights.

I slam my open palm onto the water, sending a pulse of spray into Patch’s face. He jerks backward and nearly tumbles to the floor.

“What the hell was that?” he says, his face dripping and his shirt speckled with dark wet spots.

Wormboy said...
OK, for what it's worth, when Kyle Reese has the flashback in the first terminator movie, you see a terminator ripping it up in their underground hideout. It ain't Arnie. So I think the Terminators figured that one out.

Evil Ted said...
Worm - So I suppose I could say that the Terminators only have "one mold left." Thoughts?

Evil Ted said...
Ok, Worm. I reworked the text. Hopefully it holds together well enough now, even for a conversation between a bunch of idiots.

lordhenry said...
No way Arnold makes another action movie of ANY kind. Just watch the first five minutes of the Expendables. Unless the make-up department was TRYING to make him look frail, which I doubt from the oversize coat they had him wear. I'm honestly concerned about the guy's health......