The Native American fellow sitting cross-legged on the cafeteria floor looks familiar. I swear I’ve seen him before. He’s dressed in a simple white collar shirt and tan pants – not all done up in the movie-style garb with feathers and all that – but you can tell he’s Native American. He just looks like he should be in the Grand Canyon crying over piles of garbage, or have his profile on a nickel. Not to be racist – he just has that look about him.

Anyway, I think he’s a Sioux Indian, so to further demean him, I’ll just call him Sioux.

As I lift my hand to my chin in thought, I notice the beaded leather bracelet on my wrist.

“Oh yeah,” I say. “We rented a log cabin in the Grand Tetons National Park for Game 6.”

“Not quite,” I say. “I spent the first hour swatting bees that had come in through seams in the walls.”

Cut to me and the kids running out the cabin door screaming and waving at air.

“Anyway, while an exterminator sprayed the place, we strolled over to the gift shop-slash-Indian Art museum.” I nod at Sioux, then display my braceleted wrist. “He sold me this.”

There is a period of confused silence. 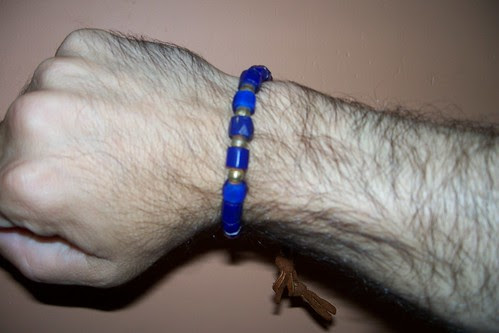 People nod. The get it, but aren’t impressed.

I turn my attention to Sioux and lean forward in my chair to have the same conversation I had at the Grand Tetons Indian Art Museum.

Sioux startles, as if he had been asleep with his eyes open. I remove the bracelet and show it to him.

“I bought this bracelet from you yesterday,” I say. “It didn’t occur to me then that it was purple and gold. Those are the colors of my team’s arch-rival, the Lakers, and I’m concerned that this purchase may jinx the Celtics’ chances to clinch the championship for Game 6 tonight. So I was wondering if I can return it.”

“That’s how I’d look at you too,” Patch says. Annie cackles.

“Please sir,” I say. “I went on a tour of Jackson Lake this morning, and the flag on the front of the tour boat was yellow and purple too. I don’t think the Celtics can take this much negative mojo. If you would be so kind to just give me back the 25 dollars, I’ll give you back the bracelet.” 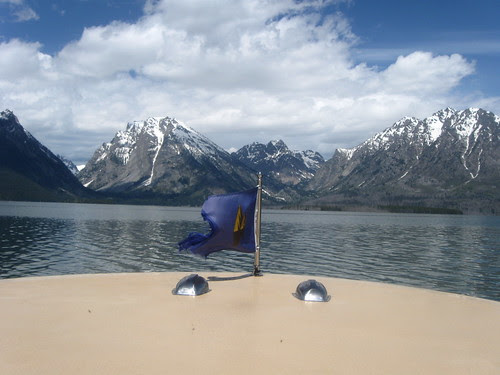 Exhibit B: The boat
(I had to steal the flag and "retire" it, of course)

“I was on vacation,” I snap, and look at Sioux. “What do you say, sir? You look like someone who understands superstition.”

Annie smacks her lap in amusement.

Sioux’s face twists. “The economy is tight,” he says. “I can take back the bracelet, but I cannot return your money.”

“Well, you see, if the transaction isn’t completely undone, I’m afraid it could still be a problem,” I say.

I stare at him.

“I told you, the economy is tight,” he says with a shrug.

“He doesn’t sound as Native-Americany as I thought he would,” Patch says.
“He’s like fourth generation,” I say. “They don’t talk like cavemen anymore.”

I return my attention to Sioux.

The old man ponders and looks up at me, his eyes distant and cold. His leathery lip turns up a bit in a half smile that seems to contain the accumulated wisdom and knowledge of an entire race of people.

He gathers himself to speak.

“Go Lakers,” he says, and evaporates into thin air.

Evil Ted said...
Clearly it was purple and gold enough to put the hex on. Don't take my rationalizing away from me, allison!

Slowly growing to love you, Wormboy.

You had me at frisson.

Evil Ted said...
Anon - See previous responses to people who don't get it. I can't help you.

Lol the mystical power of the forum blue and gold....wait a sec?

Where was that sioux guy this year?