As we set up the tent, the house in the distance taunts me.

I can barely take my eyes off it as I pound plastic spikes into the ground with a mallet.

Even worse, it looks dark and empty. So it’s there, and not even being used.

“What’s the matter?” Shannon says, noticing the look on my face.

“What kind of jerkwad compground owner puts his satellite-dish equipped house in the middle of the campground?” I say.

“Then why build the campground around it?” I say. “Is it just to rub our faces in it? That’s like having a ferris wheel and surrounding it with…people who don’t own ferris wheels.”

Shannon is too tired to get into it.

Bill’s admonition comes to mind: …apple picking outside DeKalb … barely an hour West… might as well have been rural China. There was a diner there that closed up shop at Two p.m….Two p.m.

“Why don’t you get hot dogs and buns and charcoal and I’ll finish putting up the tent,” Shannon says. “Don’t worry about dessert. I have what we need for smores.”
As the 9-year-old and I wander past the wired house, I scan the windows. Even the silhouette of a television would give me comfort at this point. I feel like a dirty farm peasant trying to catch a glimpse into the King’s horse-drawn carriage.

You’ll be lucky to find a picture of a TV set.

Placing hot dogs, buns, and a bag of self-starter charcoal to the counter, I study the stout older woman taking my money. To some degree, I envy her, blithely unaware that the NBA Finals are going on at this very moment. For an instant, I think about how it must be a pleasant way to live – not having your happiness inextricably and perpetually linked to a group of athletes whose success and failure are completely outside your control.

“Is there a television anywhere around here?” I ask.

She grins like she’s heard the question many times before. This makes me both hopeful and scared.

“There’s a little one in the laundry room out back,” she says. “Not sure if it works.”

I feel a slight chill – the idea of not being aware of the operating condition of every television in one’s vicinity is a disturbing notion.

I lead my 9-year-old to the laundry room.

I wave him off.

On a rickety wooden table across from a woman loading up a dryer is a 15-inch TV. There is a cable attached to it. Promising.

I move my finger over the power button, close my eyes, and say a brief prayer to Celtics Founder Walter Brown. A clear, digital color picture of Paul Pierce and Ron Artest fills the screen. My feeling of genuine ecstasy is what I imagine the teenagers set adrift in Jaws II felt like when the sea helicopter arrived to rescue them.

“Can we go eat?” Edwin whines.

“I’ll take you back at the next commercial,” I tell him, not taking my eyes off the screen. The Celts are up 31-22. Awesome.

The next few moments are jarring and surreal. I mean, it’s not quite as dramatic as when Jaws, attracted by the vibration of the rescue helicopter’s rotors, bites one of its pontoons, flips it over, sends a lethal hail of spinning rotor blades across the ocean, and eats the helicopter pilot whole – but it’s not good. 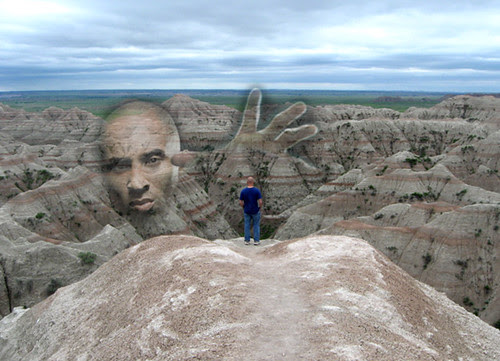 There's something about this picture of me at the Badlands
that makes me...uneasy. I can't put my finger on it.

coming back from a week-long conference and catching up on Ted's fun narrative.

Aside: I know the playoffs were fast this year because I usually have to steal away for an evening at this conference to watch a Finals game. Maybe two. I watched the rout of the Lakers by the Cs in 08 in a dorm room lounge with a few other hoops geeks--each guy gave a sheepish smile as he walked into the lounge. Awesome!
7/01/2011 9:13 AM

AnacondaHL said...
This is so awesome, matching up this story with those seemingly random-ass e-mails we got last summer.
7/01/2011 11:50 AM