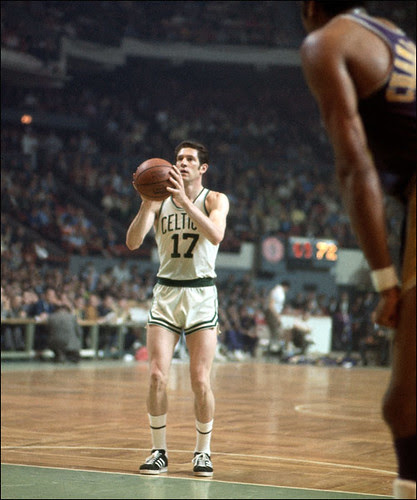 No wonder nobody's heard of him. Look how tiny he is.
I think this is how they filmed the hobbits for Lord of the Rings.

Bandana waves a dismissive hand at me and looks at Tooth. “See? I told you I wouldn’t identify with this,” Bandana says.

“Oh, come on,” I say. “This is basic history. Next you’re going to tell me you’ve never heard of Bob Cousy.”

“Are you people kidding me?” I say. 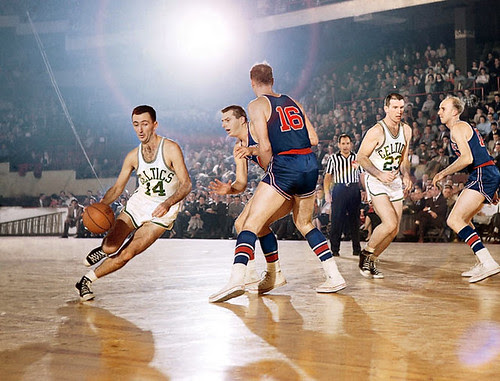 Greatest basketball picture ever? Forget the lighting, the contortion of Cousy's body and foot...how about that his moves are causing his opponents to set picks on each other.

“Aren’t my obsessions exactly on point?” I say.

“Look,” Bandana says. “If you can keep the Celtics lore to a minimum, I’ll stop trying to imagine you’re a Bulls fan. We got a deal?”

“Look at that,” Tooth says with a smile. “Progress.” He looks at his watch. “And that makes this a perfect time to end this meeting. Thanks everybody.”

Immediately, Blackberries and cell phones reappear, and the rest of the guys return to their isolated digital worlds.

In the hallway, Patch walks shoulder-to-shoulder with me.

I stop in the middle of the hallway and stare Patch down.

“Look, she’s the product of collective whimsy,” I say. “You saw her, so therefore you must possess some whimsy…or libido, or something. So I’m sure you can work up enough imagination to make it happen again.” I press a finger into his doughy chest. “But use someone else’s wife, will ya?”

He nods again, and we continue down the hall and exit the school. In the middle of the parking lot is my bed, and Shannon sleeping in it. Her nightgown is tighter and smaller.

I look to Patch.

“Could you please wait to get home before you do it?” I say.

He nods in silent shame, and we part ways.

AnacondaHL said...
The nightgown phantasm plotline is the greatest addition to this.