“And then…they lose the game,” I say. Shannon rustles next to me. I lower my voice to a strong whisper. “It’s my dream, and they go and lose the game. What does that mean?”

“For one, it means you watch too many movies,” Stache says, looking around at everyone. “That death scene was a little over the top, wasn’t it?”

Tooth waves Stache off and contemplates. “It could be a subconscious fear of success,” he says. “Maybe somewhere deep inside yourself, you realize that winning will actually never satisfy you.”

This reminds me of an interview Tom Brady did for 60 Minutes where he said “There’s gotta be more than this.” The dude had won three Super Bowls before the age of 30, and he wasn’t satisfied. God, I wanted to punch him after that interview. 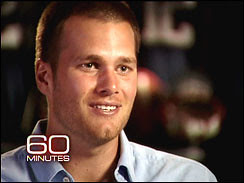 Still, if he wasn’t satisfied, how could I ever be?

Patch is staring at Shannon. The way she’s positioned in bed, her cleavage is pressed together, and one of her spaghetti straps has dropped from her shoulder. I think he’s seeking nipple.

“Trying to look into her nightgown,” I say.

Stache comes to Patch’s defense. “What’s the problem?” Stache says. “That’s not even your wife. That’s a doppelganger, a phantasm – a plot convention.”

“Still, keep your eye off my plot convention,” I say.

“What about this big Yellowstone trip?” Bandana says. “Supposedly, it’s the McGuffin of your tale, and you haven’t started it yet.”

I consider the point, and decide Bandana is right.

I lean over and tap Shannon’s shoulder.

She turns and grunts. Patch continues twisting his head for a prime angle.

Shannon awakens slowly, and looks at the expectant faces surrounding us.

Shannon wipes her hand across her brow. “My God, your narrative is so disjointed,” she says. “First of all, I’m the one who woke you up for the trip, like I do for anything that takes place before 10 a.m. Second, are you telling me you’re just going to skip the playoffs leading up to the finals entirely? The way the Celts rolled over D-Wade’s Heat in the first round in 5, then took down LeBron’s Cavs in 6 after being down 2-1, and finally taking out Dwight Howard’s Magic in 6?”

“In my subconscious utopia, she’s a huge sports fan,” I say.

Everybody does the I-understand ohhhh and nods.

I turn to Shannon.

“So do I get to tell this story how I want?” I say. “Or are you going to try to take control like you do with everything.”

“Relax,” I say to them, taking a hold of Shannon’s shoulder and giving it a little shake. “Remember, phantasm.”

Tooth looks skeptical. “Even in an alternate reality, I’d be careful,” he advises.

I look to Shannon again. She’s fixed on me with a ferocious glare, her lips clenching like a dog ready to strike. I withdraw my hand.

“Fantastic,” he says. “Even the imaginary her-”

Shannon’s glare locks on Stache, who leans back with discomfort. He looks to me.

JJ said...
I'm confused. All the guys are watching the memory of dialogue between Doug and his wife? So, I guess that means the guys have to be imaginary as well since real people can't watch someone else's memory. Thus, the whole group support thing is just going on in Doug's head and he's not really talking to anyone else? Is this right, or did I miss something somewhere?
6/27/2011 11:38 AM

Evil Ted said...
JJ - The support group is indeed "real"... and yes, they are watching the memory of Doug's conversation.

Try not to be distracted by the overlap. Just because something doesn't seem logically possible doesn't mean it's imagined. There are only two worlds to keep track of - Support group and Doug's story. But each world is about to start screwing with the other - big time.

JJ said...
ET, thanks for the explanation. I was thinking maybe it's something like that. But, I wasn't 100% sure so I wanted to check.

So, Doug was recalling his memory, which his support group is watching. Then, within his memory, he also had a dream about that old guy/coach dying and talking to his memory wife about it, which I assume the support group also watched.

The concept kind of reminds me of Inception, though not exactly. Anyway, very interesting. Looking forward to more!

Random question: Was your (Doug's) wife insulted or flattered or didn't care that a guy from a fictional support group trying to get a peek of her imaginary self's nipple?
6/27/2011 12:55 PM

Evil Ted said...
JJ - If you go back to the previous two chapters he was in bed with his wife in Chapter 11 (gets a brief visit from Patch there at the end) sleeps, dreams (Chapter 12), then awakens in bed, but the bed is now BACK in the school cafeteria surrounded by the support group (where it in fact started at the end of Chapter 10). The group could have either "watched" the dream or merely been told about about it - I hadn't considered that particular detail. However, in a movie version, we the audience would certainly "view" the dream.

A little inceptiony there, but knowing what I know about the rest of the story, no more dreaming inside dreaming to worry about. It WILL get weird, but from this point forward, it will pretty much just be the two worlds moving in and out of each other.

I'll let you know if Doug's wife gets upset about imaginary nipple viewing when she reads the chapter...possibly awesome new chapter name..."imaginary nipples"? ;)

Sjoerd said...
whoa, this story is getting more vague by the minute!

Anonymous said...
Can we just get back to some bball analysis and junk? Is this really the place for this? I come to this site for some honest opinion on basketball matters, not rambling storytelling
6/27/2011 7:31 PM

Dan B. said...
Can we just get back to some bball analysis and junk?

Is this really the place for this?

Which you will get later when a) there's stuff actually worth talking about, and b) when we've gotten a little rest. It's hard to produce new content every single day for this place during the season when we aren't making a penny off this blog. I think a vacation is certainly warranted. And now is a great time to take a little break because summer sucks anyway, but with an impending lockout? Uggggggggggggggghhhhhhhhhhhhhh.

Evil Ted said...
How come all the dissatisfied nasties are anonymous? And why do they think they have influence on content?

Anon - you are Anonymous malcontent number 3 (AMN3)...If you stick with me, you will apologize in a month. If you're unhappy, go to the beach.

Thanks for the defense, Dan B. except for the rambling part...

...trust the story. I will admit, I think it is best devoured in complete novel form, but let the chapter-a-day format give you a daily bit of enjoyment. If it's not doing that for you, feel free to go elsewhere for a while. I'm sure your lives are full enough to find something else to do.

P.S.> I do appreciate all those who say they are enjoying the story. People who needlessly gripe are depressing and, frankly, unwelcome.
6/27/2011 10:39 PM

Evil Ted said...
IMPORTANT UPDATE: Doug's wife has just informed him that she would be flattered that a fictional support group would want to see her imaginary nipples.