Bandana is sitting upright in his metal chair.

“You’re a Boston fan!” he says, pointing at me like I’m an animal in a zoo. “That explains it! I knew there was something about you.” He starts shaking his head, looking disillusioned. “I’ll bet you have, like…a Larry Bird shrine in your basement or something.”

“Don’t be ridiculous,” I scoff.

Cut to my basement, which does, in fact, have a corner dedicated to Larry Bird. It’s across from the Tom Brady exhibit. 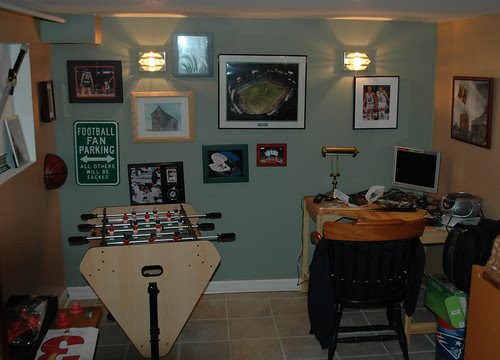 Bandana looks at Tooth. “Are Boston fans even allowed in this group?”

Tooth nods, but looks a little disappointed in me. “We don’t discriminate here,” he says, then addresses me in a calm, expectant voice. “Do you at least like Chicago teams?”

“I… follow them,” I say, “but that’s just because they’re on the local news.”
Bandana shakes his head. “Even his friend is a Boston fan,” he says. “How am I supposed to identify with this story now?”

Tooth rubs his chin and thinks. His eyes awaken. “No, this is good,” he says. “This is part of why we’re here – learning acceptance and tolerance. This is not about Doug’s affiliation – this is about his emotions, his journey. His issues are the issues we all have. That’s what we need to focus on.”

Bandana looks skeptical. “I don’t know,” he says. “I pride myself on being intolerant.”

“But you’re here to change that,” Tooth says.

“No, I’m here because my wife forced me to be,” Bandana says. Many of the other men nod with empathy.

“You know what? I like being a Boston fan in Chicago,” I say. “Whenever the Celts, Pats, or Red Sox win, people congratulate me like I’m on the team. It’s awesome. That doesn’t happen in Boston. Sure, everyone’s happy, but here, I get singled out. Here, I’m special.”

Of course, I choose to leave out the down side of living in Chicago – like also being singled out when my teams suffer humiliating losses. On the Monday following Super Bowl XLII, in which the heavily-favored 18-0 Patriots suffered an epic upset loss to the New York Giants, I was met at work with 300 colored pieces of paper in my cubicle that read “18 and oh no.”

Not to mention living in a city where the last Super Bowl win was in 1986, in which the Bears crushed my beloved Patriots, 46-10. Any time the Bears reach the playoffs, I have to endure a slew of parties that center around screenings of Superbowl XX videos and commemorative DVDs. Sometimes I wish the Bears would win a Superbowl just to marginally reduce the likelihood of my having to endure watching William “the Refridgerator” Perry’s circus-act touchdown, or hearing that Godforsaken Superbowl Shuffle. 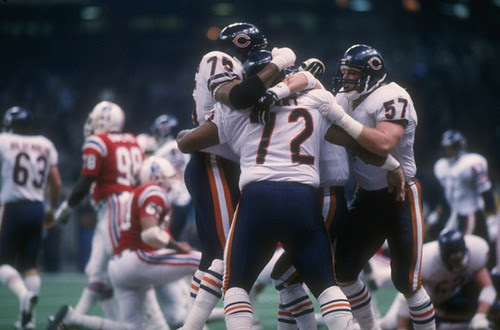 Welcome to my nightmare... 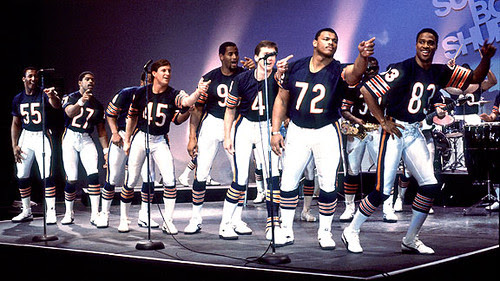 “Hockey?” I say, twisting my face like I just ate a bad piece of broccoli. “Who cares about hockey?”

Only then do I register that one of the guys in the circle is wearing a Blackhawks jersey. He looks perturbed, but this doesn’t concern me – he’s built more like an accountant than a hockey player.

“Sorry,” I say. “I didn’t mean to imply that hockey’s not a real sport. I mean, hey, at least it’s not soccer.” I scan the circle of men, half expecting to find that one of them is dressed in a Manchester United goalie uniform.
Blackhawk says nothing.

“You know, I was trying to get people in you corner, Doug,” Tooth says. “You’re kinda ruining it.”

“It would help me,” Bandana says.

Blackhawk suddenly speaks up. The words come out of him hard and fast and high pitched, like air from the leak of an overfilled tire.

“Do you have any idea what it’s like to be a hockey fan?” he says. Everyone rolls their eyes and gives a here-we-go-again look to each other. “Any idea what it’s like to try to talk to your buddies at work about a great comeback win or a prudent trade, and have them look at you like you’re an alien? Sure, there are blogs, but that can only fulfill you so much.” Blackhawk’s face is red, like the pressure is somehow building instead of being released. “My God, the Hawks just won the Stanley Cup and the guys at work still don’t know Kane from Sharp.”

I have no idea what he’s talking about. I suspect I’m giving him that “alien” look.

Tooth is massaging his temples. He looks at me as if I’m in charge of the last Titanic lifeboat. “So Doug, how about you continue your narrative?” he says.

There is a queen-sized bed in the center of the circle. In it, Shannon is sleeping. I start getting undressed.

“Oh my God, are they gonna do it?” Patch says to Stache.

“What would that accomplish?” I say.

“It would accomplish something for me,” Patch says.

I slide into bed next to Shannon.

“Honey,” I say, nudging her shoulder.

JJ said...
I refused to believe that your job is not really a TV/movie script writer. This stuff is way, way better than most of the crap on TV. I actually hated Curve Your Enthusiasm. Yours is far more entertaining, ET.
6/23/2011 11:02 AM

Anonymous said...
Any and all shots at hockey will not be tolerated! Real sport?!? Try putting the most athletic basketball, football or baseball player on skates! That's just a prerequisite to playing hockey. Comparing soccer, with it's cavalcade of douchebags that just stand around and fake injuries for a living, to hockey is beyond ridiculous. The best athlete in any pro sport would be the worst player in the NHL, guarenteed. And while I'm here: baseball is NOT a sport - it's a game. Only Hockey, Basketball and Football are sports.
6/23/2011 1:16 PM

AK Dave said...
This series is taking a strange turn toward autobiographical fan-fiction. I'm interested to see how far ET takes this.

It amazes me how much we just don't give a crap about this draft. There is zero intrigue, zero excitement, and zero interest, mostly because of the perception that there is zero talent in this draft. Either that, or the NBA is so saturated with talent that unless a LeBron gets drafted, we don't care anymore.
6/23/2011 1:58 PM

Evil Ted said...
JJ - From your keyboard to some producer's ears! Actually, while I'm not a "professional," this is my fourth book / novel / compilation. I have some self-published material that I may provide links to when Traveling is complete, for those who are interested. One is a psych thriller murder mystery, and the other two are wonderfully filthy dystopian male satires.

AK Dave - Oh, it will go farther than I ever envisioned when I began. BTW, there's a draft sometime soon. Might be tonight.

Evil Ted said...
P.S. JJ - It's Curb your enthusiasm. I've curved my enthusiasm before, and it's quite painful.

JJ said...
ET - Yeah, I hate Curb Your Enthusiasm so much I don't even know how to spell it. Haha.

Czernobog said...
I never really got into Curb your enthusiasm, but I thought
Seinfeld was overrated. And Jerry Seinfeld himself is the LeBron of comedians. Astoundingly gifted, but has no balls.
6/23/2011 5:51 PM