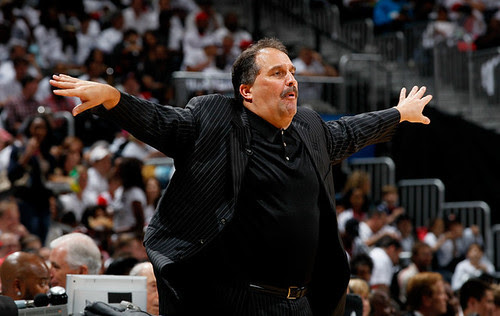 Down 3-1, Stan Van Gundy gets ready to fly north for the summer
FYI, as I noted earlier in Friday's WOTN comments, I attended the Derby Festival Basketball Classic at Louisville's KFC Yum! Center. (No, I did not eat any KFC. I did, however, eat fresh-cut potato chips topped with the following: beef slathered in barbeque sauce, nacho cheese, chives, tomatoes, bacon bits, and jalapenos. So that was nice.) It was a last-minute "Hey, I have free tickets for tonight's game, you wanna go?" deal, so I didn't get a chance to grab my D-SLR camera, but I did snap some pictures and video with my iPhone. I'll put together a post about it sometime in the next couple days when there's less to talk about. In the meantime, lots of pictures to get to in today's post! 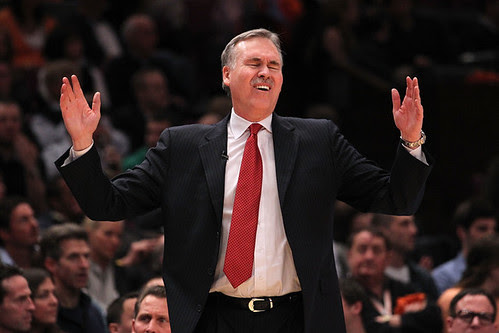 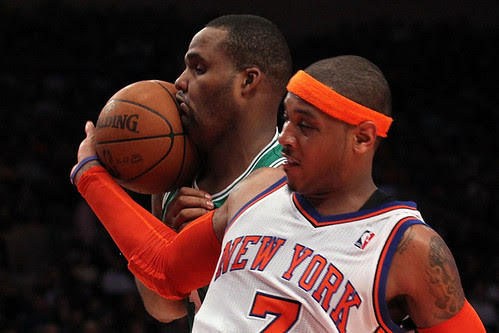 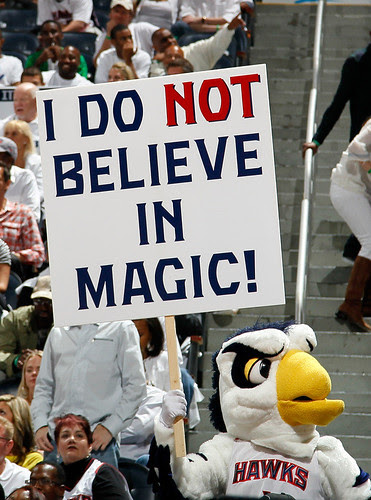 Don't believe in magic? these guys would like to have a word with you. These guys too. 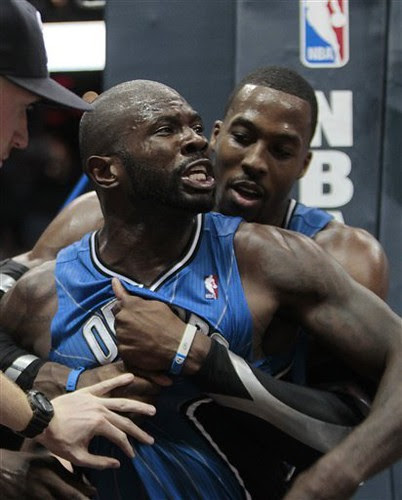 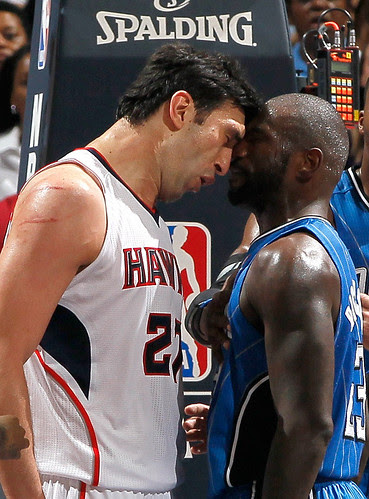 "Do you really think I'm scared of a guy named Zaza?" 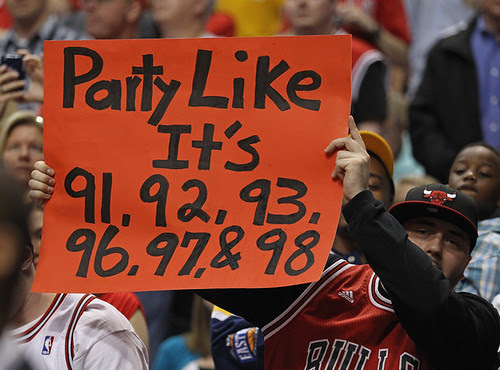 But not '99? You're lucky Prince isn't here. He'd might get pissed and punch you in the shin or kneecap (because Prince is short, you see) 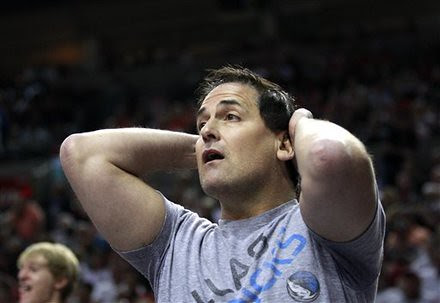 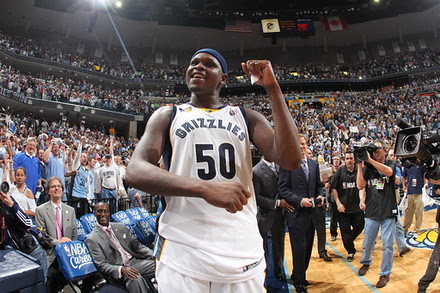 Zach Randolph dancing? You know we have to post that 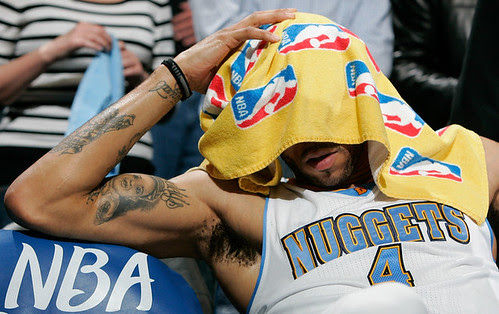 Maybe having a talented superstar is important after all 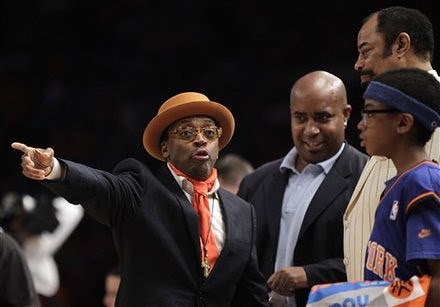 If the Knicks want to somehow blame the loss on Spike Lee's wardrobe, I'm cool with that 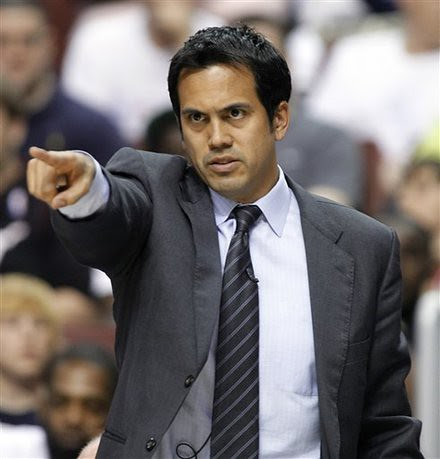 No, Erik Spoelstra, you can't blame your loss on Spike Lee

Nationally Televised Games:
Spurs at Grizzlies, TNT, 8pm (Grizzlies lead series 2-1): It took me eight tries to type "Grizzlies lead Spurs." My fingers just wouldn't let me do it no matter how hard I tried.

Frail Blazers at Mavericks, NBA TV, 8:30pm (Series tied 2-2): It's easy to shake your head at the Mavericks' annual postseason meltdown, but you have to remember who they're playing. If there is another team that's shown it's capable of blowing a first round matchup the past few years, it's Portland. I don't mean to offend fans of either team, but really, these two teams are just infuriating in April.

Thunder at Nuggets, TNT, 10:30pm (Thunder lead series 3-0): Fun fact: the Nuggets are shooting 68.7% from the charity stripe in this series. In related news, Thunder fans have their brooms in hand and are ready for the potential sweep.

chris said...
You managed to sneak in an indirect reference to Alan Parsons's musical production skillz. LOL, nice. (and it is truly sad that my little cousin knows that Pilot song due to...

Selena Gomez's cover of it.

Victor said...
why you hating on the blazers???? Yeah we lost to the Suns last year with a hobbled Roy ONE WEEK off of knee surgery and Aldridge hadn't really come into his own yet. The Suns made the Western conference finals, so it's not like we lost to a garbage team. The year before that we lost to a Rockets team that pushed the Lakers to 7 games... So I think you're overstating things just a bit there buddy. It's not like we were the 1 seed and losing to the 8 either. But whatever, you're always hating on the blazers so I guess it's nothing new.
4/25/2011 5:21 PM

Mr. Too Nice Guy said...
I don't mean to offend fans of either team, but really, these two teams are just infuriating in April

I see no reason why you couldn't just say infuriating in the playoffs. Interesting to see which doomed playoff franchise truly cements its legacy in this matchup.
4/25/2011 5:44 PM

Dan B. said...
Victor -- Go look at the Blazers' record in the playoffs. They haven't made it out of Round 1 since the 1999-2000 season. They made the playoffs 5 times during that stretch (not counting this year). I'm not hating -- I'm frustrated. I like the Blazers. I want to see them do well! But they just can't catch a break with their constant injury woes, and they keep teasing their fans with the playoffs... then immediately get bounced anyway.

Victor said...
Yeah but I don't count the Jailblazers as being part of this team. I understand the franchise hasn't made it past the first round since the meltdown against the Lakers but that was a completely different team than the team that is out there now.
4/25/2011 6:16 PM

kazam92 said...
Spurs reign lasted from Lockout to Lockout. Tim Duncan doesn't have that extra gear we thought he still had. I won't say he's done, but the only way he can really stay relevant is if the Spurs stumble on another Tim Duncan where he then becomes Robinson, which is highly unlikely.
4/25/2011 9:39 PM

AK Dave said...
Dirtiest. Quote. Ever. I mean, this has to be intentional: (from the AP Recap of Mavs-Blazers game 5)

"Dallas led 44-43 at halftime. Both teams had nice spurts, but neither could keep it up for very long. "

No way Dwight is coming to L.A. we are trying to get Marc Gasol Back from Chris Wallace but we still haven't figured out a way to include Kwame Brown in the deal.
4/26/2011 1:09 AM

you need to use this photoshopped image of kobe using crutches on the basketball court with his damned ankle!

this will be enjoyed by all kobe haters! =)

Anonymous said...
You know what's amazing about the Grizz performance is that statistically, no-one played great. Randolph was closest to a double-double and even that would have been with 11 points and a +- of +12. I guess 8-17 on turnovers counts for a lot.
4/26/2011 2:43 AM

Mark said...
Is it just me or is anybody else also automatically thinking about "Lenny Kravitz - Fly Away" when looking at the SVG picture?
4/26/2011 3:49 AM

Don Ebay Mølse said...
RIP Spurs. Its been one helluva ride. Even if you should pull up an upset and win the last 3 games you will not be anywhere near a championship anymore. Any thoughts on what might happen to this team now. I cant see them just fade into oblivion the next couple years. With the competitiveness of these guys i think they would rather retire.
4/26/2011 5:57 AM

Batmanu said...
Ah, that hurt last night... I can only hope to feel better tonight with a Lakers loss.

I mean, all three teams I wanted to win last night didn't.

My team - the Spurs, if you didn't know - didn't even try in the second half. Some of the worst turnovers and most lacking defense I've seen. I think for a second we had become the Timberwolves... without Kevin Love. Bawful said we completed our transformation into Phoenix Lite. If that's true, then we shouldn't have too much trouble coming back from 1-3. right?

The Blazers just let me down. I thought it would at least be a bit closer. I really want the Mavs to get knocked out.

And the Thunder. Not much you can say there. The game was at least close and the Nuggets were probably due for a win. Just icing on the bad-evening cake.