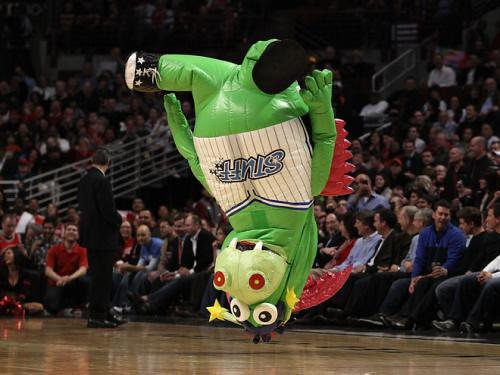 It's like the Bizarro version of the Craptors mascot!
Chris sent me an e-mail this afternoon alerting me to this recent development: Detroit's population has dropped to 713,777. This means Detroit is now smaller than Louisville. (Okay, partially because Louisville redefined its city limits several years ago to make it seem bigger. Whatever.) So now my question is, why the hell don't I have an NBA team yet?

The continuing failures of the Toronto Craptors: Per Scott Carefoot, "In February and March, Bargnani has played 19 games and 716 minutes but only blocked 6 shots. 'That's a 7-footer, ladies and gentlemen!' "

Also worth reading: the continuing failures of Agent Zero. 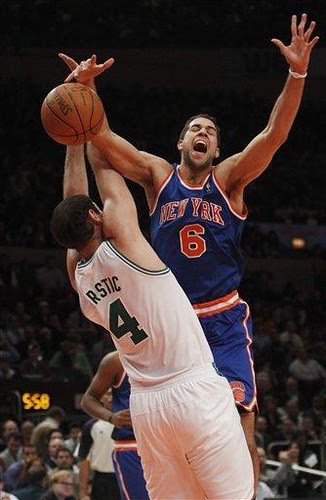 Caption This!
Seriously, what the hell is going on with Landry Fields? 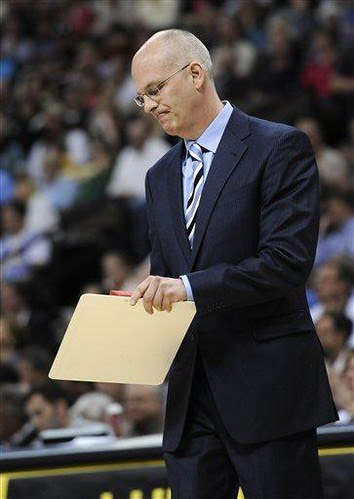 Jay Triano always carries his résumé with him. Probably a wise decision. 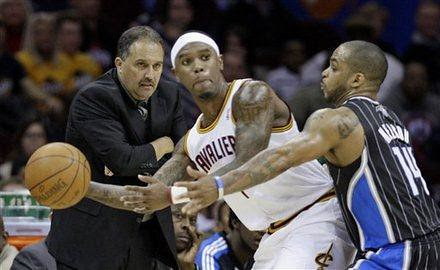 Nationally Televised Games:
Bulls at Hawks, TNT, 8pm: Oh, just what I want to watch. A tired Bulls team on the second night of a back-to-back versus a Hawks team in the middle of its usual springtime mediocrityfest.

Suns at Lakers, TNT, 10:30pm: Andrew Bynum's on the second night of his suspension. Why do game previews make a big deal out of this? You'd think the Lakers would be used to playing without Bynum for extended periods of time by now.

All The Other Games:
Wizards Generals at Frail Blazers, 10pm: You know, John Wall could have a chance in the next season or two to join the 20-10-50 club. He's averaging 15.9 points and 8.7 assists as a rookie, and the Generals are, after all, the Generals. (They've already lost 51 games this year!) Assuming Wall progresses as a player and the Generals continue to fail to produce an effective team, I have high hopes for this elite club inducting a new member.

Anonymous said...
Detroit itself does have a depressingly low population, but the contiguous urban area of Metro Detroit has around 4M people.

Anonymous said...
Hawks getting pounded on, but Ronnie Brewer just needs to continue doing nothing for 12 minutes for some serious, serious lacktion. You can do it Ronnie!
3/22/2011 9:10 PM

stephanie g said...
Is there a snappy term for when the "home" crowd openly cheers for the other team? Because that's pretty much every Atlanta game, thanks to all the transplants. It may have been worse tonight than when they played New York, including MVP chants for Rose.
3/22/2011 10:15 PM

Mayor Johnson doesn't exactly feel like the Kings are going to be staying.

Marylander said...
Unbelievable game. I wish i was watching this game with the Basketbawful gang!!! WOWWWWWW!! thanks to basketball gods for this game. Love it!
3/23/2011 12:53 AM

Niko said...
Kobe Bryant post game interview: "We did some good things, got our hands on balls..."

AnacondaHL said...
I would like to remind everyone that Vince Carter is a piece of shit, similar to the clock management and last possessions by the Suns.
3/23/2011 12:57 AM

chris said...
As the Suns melt down hard (ONCE AGAIN, WHY DOES VINCE CARTER HAVE A JOB?), and the Lakers get to gloat like they deserve everything they've ever gotten...

Hardwood Paroxyism commented that the Lakers seem to always get their way, the breaks, the last two years.

My reply sets the record straight, because it's been a whole lot longer than that, and because one junked Conference Finals in 2002 turned out to be one of the many dominoes that might lead to Anaheim getting a half-baked, fan-apathetic "team" from the Maloofs, and Sacramento never seeing another professional sports team again.
3/23/2011 12:58 AM

Karc said...
@avoozl - Grant Hill picked up two fouls and fouled out. Gentry had to do it. If Dragic was still on the team, it would have been him in instead of Carter. Believe me, Gentry sure as hell did not want to put Carter back in the game.

Here's my "Laker hate" question, was Kobe Byrant making bad passing decisions disguised as helping his teammates trying to get the triple-double (granted, Gasol missing some easy bunnies kind of disputes that, I'm talking more about the threes), or was he legimately trying to keep the Suns off balance until he finally said enough's enough?

BTW, Derek Fisher, 46 minutes, 2 points when people though that the game was over until Odom's incredibly stupid foul on Fyre with 2 seconds left in the 1st OT (rule of thumb, take the foul to give between 5-10 seconds, NEVER under 3, it's going up). Isn't this why they got Steve Blake...? Or (I jokingly muse) the reason they go after Chris Paul?
3/23/2011 1:21 AM

Paul said...
Kobe Bryant dirty quote Machine: "We did some good things, got our hands on balls"

Wow, I'm just finally recovering from the 4 different heart attacks I had on that triple OT.

Here at Basketbawful we'd like to thank Vince "big vagina" Carter for proudly "representin".
Dear Vince, thy efforts shall not go unrewarded. I fully expect you to become the center piece of the basketbawfull web's banner for next season

I know Robert Sarver has been obsessed with Killing Steve Nash's love for basketball, I sincerely doubted he would succeed, until today.

Paul said...
@Kark
RE: your "Laker Hate" question.
Even though Kobe ended up with a respectable 50% from the floor in route to 42 pts. Grant Hill played WORLD CLASS defense on him.

So Kobe was legitimately looking for his team mates. Especially on a night when Artest was "hot" from beyond the arc(3-5).
At one point in the 2nd OT, Gasol catches the ball at the elbow with Frye on his back. He immediately looks for Bryant who opened right behind the arc. As soon as Gasol is getting ready to pass the ball to Bryant, he actually yells at Gasol "TAKE HIM!!" Gasol kinda hesitates and then postes up Frye for an easy left handed hook.

It was I guess a mix of Bryant's tired legs, G Hills good D all night long but mostly a concerted effort to keep the rest of the guys in rhythm, which resulted on a very balanced box score despite Bryant's 42.

Hardwood Paroxyism - repping Memphis - is just ON FIRE with his series of angry tweets in the wake of the crushing Laker win - another day of sunshine for the big markets, another reminder that Small Markets Not Named San Antonio are second-class citizens.

I'm just going to quote these. This is pure gold.

"How awesome must it be to be Lakers fans? To nearly constantly feel the thrill of victory? Must be a lot better than us small market chumps"

"I just think it's awesome that the Lakers prove that there are people who win in this world and people who don't."

"Until the Lakers get their next superstar(s). Because that's what winners do."

"@PrausNichols I know! And the Smush years were way worse than most fans who wait entire lifetimes and never see any significant wins."
"@loverofsports Why do you say that? It's true, right? There are winners and there are losers. winners like Kobe and losers like Nash."
"@Smooth_Operatah That's what happens when you root for a loser. When he winds up in a big market he'll be healthier."
"@ColinZvosec Winners win and losers lose, bro. pick your train and riiiiiiide"
@ColinZvosec LA won because they're better, period. When it counts, winners win. It counted tonight. Had they lost, didn't count.
"Reality? Lakers are from Awesomeville, population: no losers"
"(brief departure into reality: the fact that games like tonight largely embody Steve Nash's career is slightly crushing) CAUSE HE'S A LOSER"
"Look at Pau Gasol. Those Memphis fans (ARE THERE MEMPHIS FANS? AMIRITE, LOL) never appreciated him. Because he wasn't a winner. Now he is."
@ValleyoftheSuns Best players are only on winning teams. Like the Lakers.
"@loverofsports Oh, yeah. How many times is Minny on TV? Does Minny have a Randy Newman song? Does Flea come to their games? DON'T THINK SO"

A couple of my responses which he retweeted:

AnacondaHL said...
Heh @ tweets. Some of those are a little ooverly bitter, nut the point is made.

However, in the end there's not much to gloat about. Both teams were tired down the stretch, both teams made idiotic mistakes in addition to the impossible plays. Lakers forced into multiple shot clock violations?! By the SUNS?? But in the end it was the 2 failures vs 1 failure that decided the game. Not fouling Kobe, Kobe taking that idiotic shot, and that godawful "let's just dick around and waste time" last play. That's that. And the fail of Vince Carter.

Here's to hoping Arizona atleast gives themselves a chance against Duke tomorrow.
3/23/2011 8:36 AM

tjr said...
"When Ron Artest hits you square in the chest with a load you're going to feel it"
-The First piece of commentary I heard when I turned on to a game which has shortened my life span.
-Along with Vince's "beard" adding to that.