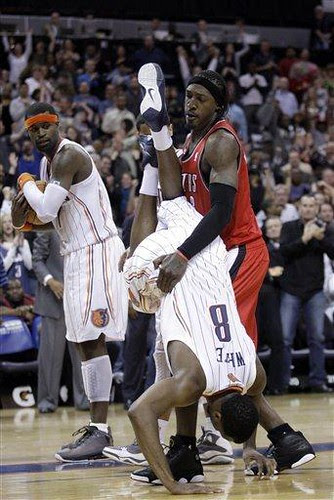 "Gimme your lunch money, kid! I'll shake it out of your pockets if you don't give it to me!"
Anyone else really disappointed Bawful didn't inform us he missed today's post thanks to "flu-like symptoms?" For shame.

The NBA -- rather approprately -- scheduled an April Fool's Day game between the Cadavers and Generals. Even more appropriately, jose3030 discovered this sweet ticket deal on Stubhub: 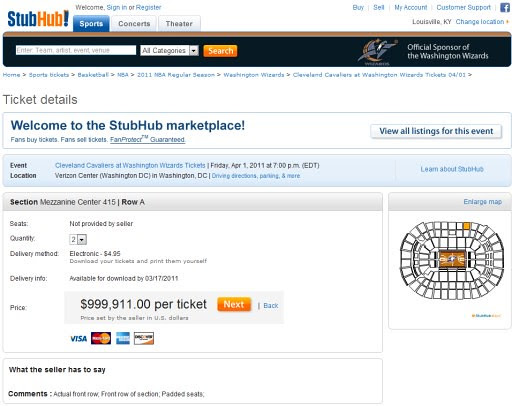 Uh, I think I'm going to need to get a different credit card to buy those, Stubhub. Gimme a few minutes... 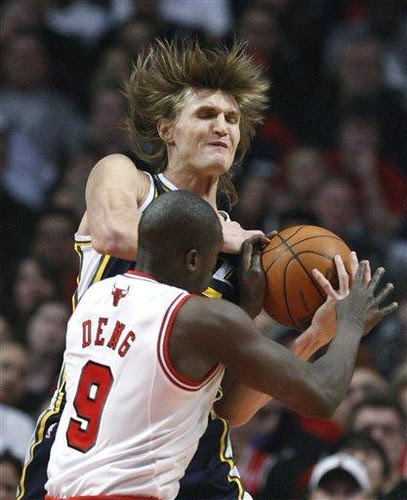 Is it possible that Andrei Kirilenko's strategy is to distract his opponents with his ridiculous hair and general appearance? 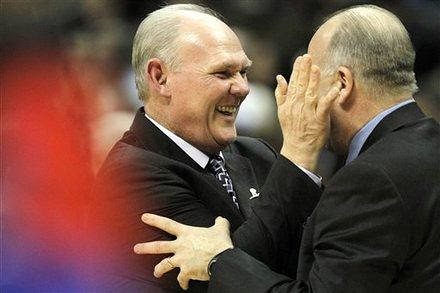 "Wow, your face is soft! Do you use moisturizer?" 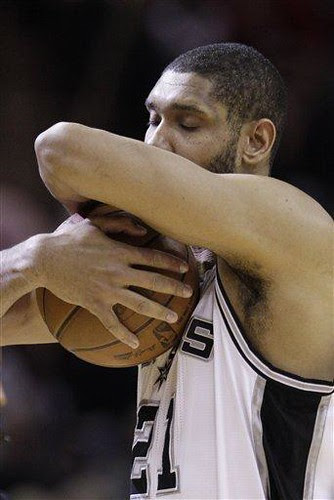 I've seen a pic of Tim Duncan doing this like 825 times, but it still creeps me out 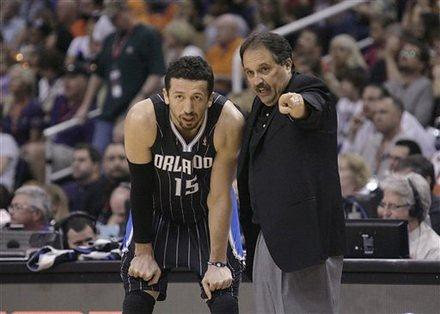 "You see that ball? Yes, ball. See that round thingy? That's a hoop. Put ball in hoop. Got it?" 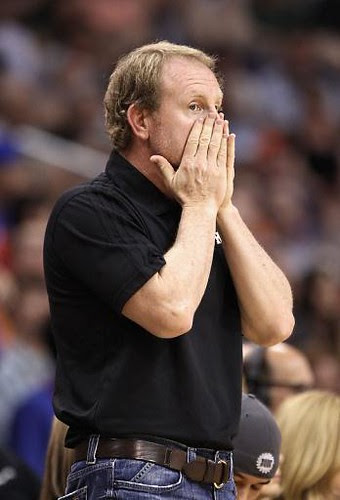 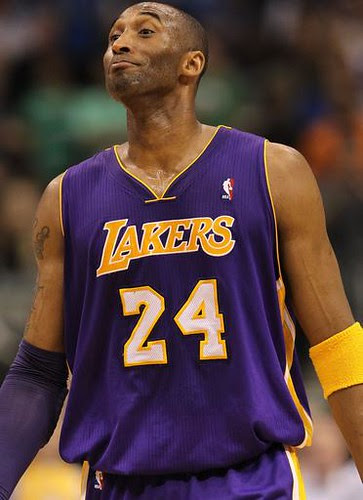 I haven't seen a face that smug since this guy: Magic at Lakers, ESPN, 10:30pm: Controversy!! Dwight Howard has seemingly shunned Marcin Gortat. Per Gortat: “We didn’t shake our hands, we didn’t talk to each other, we didn’t say anything. And that’s fine, at the end of the day he’s on a different team, I’m on a different team, and I’m a grown-ass man, I don’t need him any more.” Anyone else picturing Dwight Howard making a frowny face in response to this? Because I am. And it is making me chortle.

All The Other Games:
Celtics at Nyets, 7pm: According to The Score's shot chart for the downright ridiculous Celtics/Bucks 87-56 game yesterday, Troy Murphy appears to have a made shot from out of bounds behind the backboard. Nice. I was unaware HORSE shots counted in the NBA.

Thunder at Wizards, 7pm: Kendrick Perkins might be making his Thunder debut against the Generals. Way to kick a team when they're down, guys.

Nuggets at Hornets, 8pm: Protip: don't count on JR Smith shooting lights friggin' out from downtown in the 4th quarter every game like he did against Detroit. That was maaaaaaaybe just an aberration.

Clippers at Grizzlies, 8pm: Three of the Grizzlies' remaining 15 games are against the Clippers. Talk about favorable scheduling down the stretch.

Suns at Rockets, 8:30pm: Steve Nash is expected to miss his second straight game with what the team has called "pelvic instability." (I'm not sure what that is, but it sounds worse than the "pelvic inactivity" which I just decided is great euphamism for a lack of sex that I will have to casually drop into conversation at some point soon.) But either way, Aaron Brooks will get the start. Against his former team. Intriguing...

76ers at Jazz, 9pm: It's possible that the Sixers can sweep the Jazz for the first time in 23 years. Mind-boggling.

Warriors at Kings, 10pm: You mean to tell me Kevin Love's double-double streak was ended by the Warriors? Oh snap! The Kings might not break 50 points in this game!

Mike Mai said...
The following is taken from yahoo sports, it made me laugh. I wonder what Nash has been up to.

G Steve Nash sat out Sunday as his ongoing pubic symphysis irritation isn't much better. Even with two days off Nash couldn't play and is probably going to miss Monday's game in Houston as well -- critical since the Rockets are one of the teams in the scramble with the Suns for a Western Conference playoff berth. Nash said he feels he will be ready for Wednesday's game in New Orleans against the Hornets.
(Yahoo! Sports)
3/14/2011 8:31 PM

The Sports Hayes said...
If Boston doesn't snap out of their funk, you can pretty much lock in a Chicago vs San Antonio finals matchup this June.

They look like a lazy, tired team at this point battling too many injuries and too much turnover.

Meanwhile Chicago's firing on all cylanders and with their alien invasion repelling coach, they appear to be virtually unstoppable.

Of course, if San Antonio suffers any major injuries now until May then Dallas will be the West representative instead.
3/14/2011 10:34 PM

winnetou said...
In that BOS@NJN game, Rondo ran into the second hard screen this year. Shouldn't there be a warning? Is he "more" popular in that locker room than we thought?
In the same game, Sasha Pavlovic managed to look busy for 7:12, only committing two fouls while Boston lost in New Jersey with an 8-24 free throw disparity. That said, the box score makes it look like the problem might have been not bothering to defend NJ's 25 3pt-attempts which allowed the Nyets to convert 11 of them.

Jabari: Childress probably sat most of the season since he's been one of their three disappointments, at least in the games I watched. The others would be Dragic (who couldn't repeat his fantastic playoff performance) and Warrick (who I probably just put too much faith into as a drop-in replacement for STATue).
By the way, pubic-symphysis irritation can take a long time to heal and has been bothering Nash for the last two weeks.
3/15/2011 3:17 AM