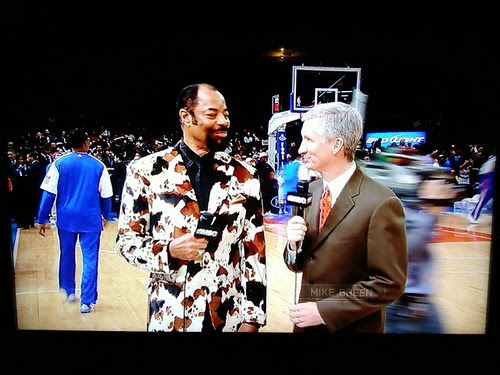 That splatter is not dapper!
(h/t Drake and Will)
Since this is a blog about bad basketball, I have to link to this wonderful Joe Posnanski piece about Red Klotz and the Washington Generals, the team that wins by losing.

Those crazy Taiwanese animation gurus are at it again. This time they've documented the lawsuit that two massage therapists have brought against Brett Favre. 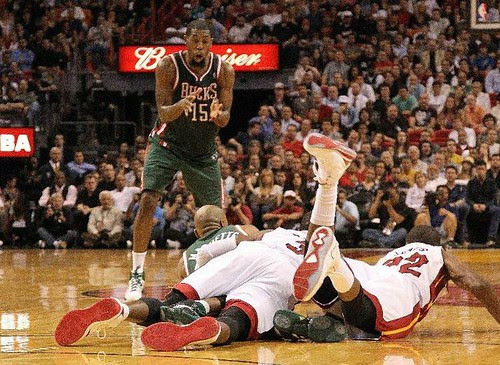 The Milwaukee Bucks. John Salmons looking goofy. A pile of tangled limbs and men laying on each other. A picture that was apparently taken at ISO 256000 and looks like an impressionist painting. This is basketbawful. 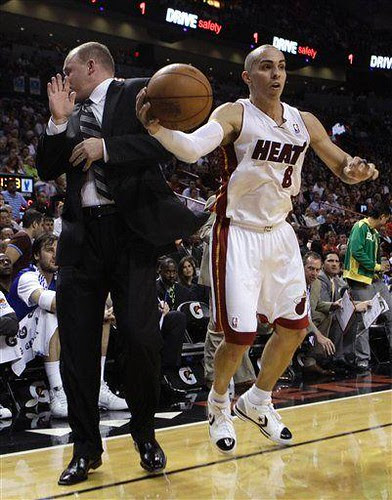 Not only did this result in a technical foul for Scott Skiles, it also made for a fantastic picture 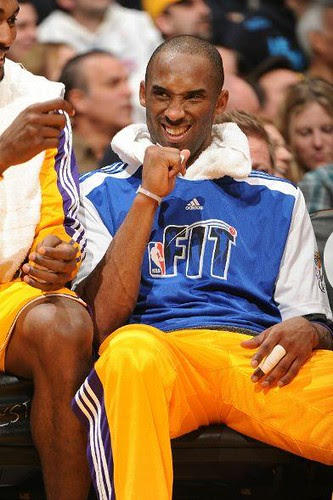 Another day, another ugly Kobe face 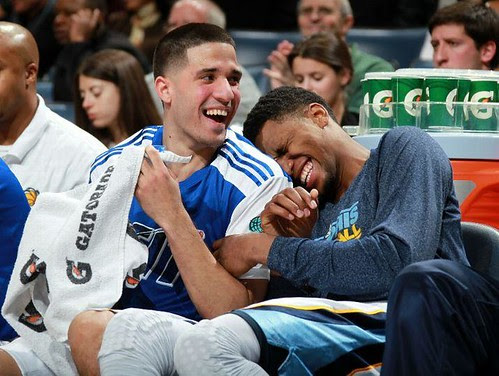 They're like the bizarro versions of Tony Allen and OJ Mayo! 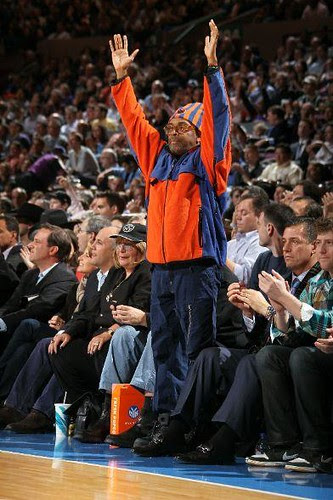 Nationally Televised Games:
Lakers at Suns, ESPN, 10:30pm: Hurray! ESPN is finally showing another NBA game! Wait, it's a late game, so I'll be asleep for the second half? Nevermind.

All The Other Games:
Craptors at Cavaliers, 7pm: Oh hell no.

Bucks at Magic, 7pm: Even when healthy, the Bucks can't beat the Magic. They have nine straight losses in Orlando. So why should things change now when Brandon Jennings is injured?

Wizards Generals at 76ers, 7pm: I'd like to reiterate that the Generals are 0-16 on the road this year. You know, maybe the Craptors/Cavs game isn't the clear-cut winner in the battle for least appealing matchup of the night.

Spurs at Celtics, 7:30pm: I don't care what meaningless bowl games or World's Strongest Man reairs you have on your schedule, ESPN. Why the hell aren't you showing this game?

Warriors at Hornets, 8pm: The Warriors love to run. The Hornets don't. I would say whoever controls the tempo of this game would be a favorite, but... yeah, they're still the Warriors, even if they get to play the tempo they like.

Bobcraps at Timberwolves, 8pm: Let's take a closer look at this one. The AccuScore simulations of this game give the Timberpoops an 80% chance of victory. Minnesota is 9-26 at this point. This should tell you all you need to know about how horrible the Bobshats are at this point.

Frail Blazers at Rockets, 8:30pm: The last time we saw these teams battle was just last week, and the Blazers stomped all over the Rockets. Houston had their lowest point total of the season in a 100-85 loss. Revenge game, anyone?

Hawks at Jazz, 9pm: I don't like this game for the Hawks. They'll be on the road on the second night of a back-to-back against a well-coached team. I believe the technical term for this situation is "ruh roh!"

Nuggets at Clippers, 10:30pm: Word is that Blake Griffin will be in the dunk contest. Oh snap! I may have to actually watch for a change.

Will said...
1. It's as if Scotty-boy there is saying "Don't look at me, I'm hideous."
2. I love how the still for the Korean re-enactment video is cartoon Favre drooling with the hearts in his eyes.
3. I would go with pointilism over impressionism.
1/05/2011 5:03 PM

Anonymous said...
So is the wearer of that jacket under the impression its garish colors will detract from his age/baldness and pull tail?
1/05/2011 5:27 PM

Will said...
JJ- that's awesome. with Blake Superior and McGee in the contest, the winner will hold the dual crown of NBA dunk champion/goofiest looking motherfucker in the league.
1/05/2011 6:01 PM

Wild Yams said...
Here's a quote from that Pierce vs. Bird article: "Pierce is a throwback player. He uses a bevy of spin moves, up-fakes and slashes to score and draw fouls. Add to this the fact that he’s about 6-7, 235 lbs, and there is little opposing defenders can do to stop him. Just ask Kobe and Lebron, neither of whom could do it during last year’s playoffs."

Kobe probably couldn't do it because he wasn't guarding Pierce - he was guarding Rondo. Ron Artest, however, did a pretty good job shutting Pierce down.
1/05/2011 10:29 PM

How does your starting shooting guard, in 129 minutes of playing time manage just one free throw? (which makes his 7 TOs look even worse since he is obviously just jump shooting now).

Wild Yams said...
The Lakers won tonight, but considering there was all that stuff the other day about how Phoenix has one of the all-time worst defenses, and considering they play at one of the faster paces in the league, the fact that LA couldn't break 100 points against the Suns is a little troubling to me as a Laker fan. I'm hoping it's just due to it being the second game of a back to back on the road, but considering LA's anemic offensive performances lately I'm not inclined to give them the benefit of the doubt there.
1/06/2011 12:43 AM

The Sports Hayes said...
Artest is the one guy in the NBA that neutralizes Pierce. If the Lakers lose Artest to suspension, trade, injury or whatever come the Finals....they have to pray Miami or Orlando takes the East or they have absolutely no chance in hell of 3 peating.
He torched the Lakers in 08 as well as Lebron twice in Cleveland (08, 10) and I'll never forget taggging the defending conference champion Philly for 46 back in 02.
He's nowhere near as good as Bird was, but when he actually turns it on he's almost impossible to stop. If the Spurs don't come up with the second coming of Bruce Bowen, don't expect them to take the Finals if Miami/Orlando don't make it.
1/06/2011 3:51 AM

Wild Yams said...
Pierce torched the Lakers in 08 cause with Ariza hurt the Lakers had to go with the Vladimir Radmanovic/Luke Walton pupu platter at small forward. Now the Lakers have Matt Barnes backing up Artest, and that's a significantly more potent defensive combo.

That said, if the Lakers don't start playing up to their considerable potential they don't stand a chance of making it back to The Finals.
1/06/2011 5:04 AM

Anonymous said...
Every now and then the winning team deserves a WOTN mention and last night was the Celtics. Squeaked out a win after shooting almost 20% better than the Spurs and almost choked away the game with a 9 point lead with 50 secs to go. I routinely looked over the boxscores and for the life of me cannot figure out the Celtics' barely escape with their lives after a torrid shooting night.
1/06/2011 6:46 AM

Dan B. said...
Here is a fantastic article on Rondo and his phenomenal night against the Spurs that addresses his growth as a player and learning how to shoot the mid-range jumper.
1/06/2011 7:22 AM

Cuddly, friendly Canuck said...
OK, in honour of the Craps actually winning a game against a roster as bad as their own, I present the positive version of your 2011 Huskies:

Alabi: appears to be tall and slim
Barbosa: Can still get to the basket!
Bargnani: If he tried at all, just a little, he'd be better than Nowitzki
Bayless: has all the tools...
Calderon: Steady, good shot, and I'm sure we've all noticed that they have no chance when he don't play
Davis: IF he develops a jump shot, he could be Kurt Thomas/Haslem. I'd take that.
Derozan: has superstar tools. Like another high jumping fella that once played here...
Dorsey: he's certainly buff and goes after it
Dupree: uh...
Evans: does one thing very well, but he's no Rodman
Johnson: jumps high, tries hard
Kleiza: sorry, he still puzzles me. Why he no good? He should be great!
Stojakovic: could contribute if his body would function
Weems: great slam dunker...no shortage of physical tools
Wright: able defender, very enthusiastic

AnacondaHL said...
Yams - The Suns, as of a few games now, have overhauled their defensive strategy, since the pick and roll scheme they had was, and I quote, "too complex". They've been doing selective zone and hard traps with rotations to simplify pick and roll defense, and it seems to be Doing Okay.

Vince Carter, however, needs to GTFO, especially in 4th quarters. Choking offensively, defensive lapses, bumbling rebounds, fuck him. Treat him like the expiring contact that he is.
1/06/2011 8:28 AM

Wild Yams said...
AnacondaHL - I hope you're right. FWIW, I thought the Suns' D looked decent out there for much of the game. I keep waiting for any signs that the Lakers are turning things around, and if the Suns' D has picked up, that helps explain the sub-100 point output by LA, and makes me feel a bit more optimistic.
1/06/2011 1:49 PM
Post a Comment
<< Home
Subscribe
RSS Feed
Mailing List