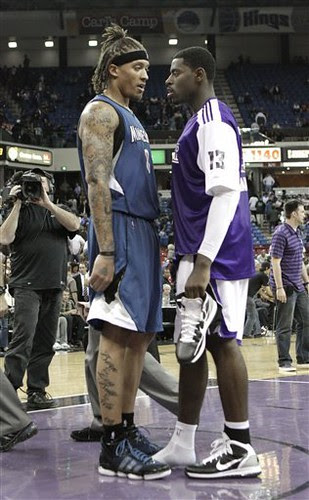 "Deos mio, man. The Timberwolves and me, we're gonna fuck you up."
"Yeah, well, that's just, you know, like, your opinion, man."
You know you want to buy these: Lego NBA players from 2002. Only $12 each! They're in keychain or necklace form, because nothing says "I'm a classy dude" like wearing an Antoine Walker Lego player necklace to the blackjack tables when you go to Vegas or Atlantic City. 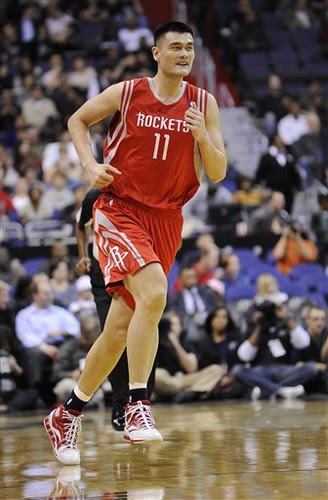 If you look closely, you can almost see the papier mache crumbling on Oww! Ming's legs 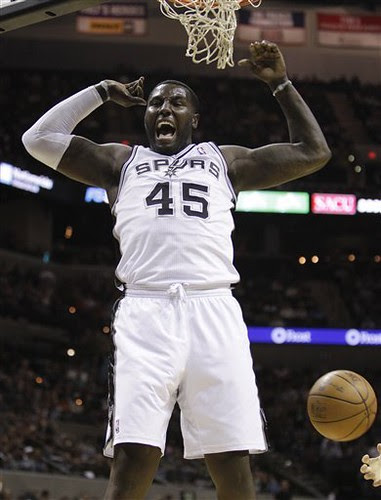 Take it down a notch, DeJuan Blair. You're only beating the Clippers 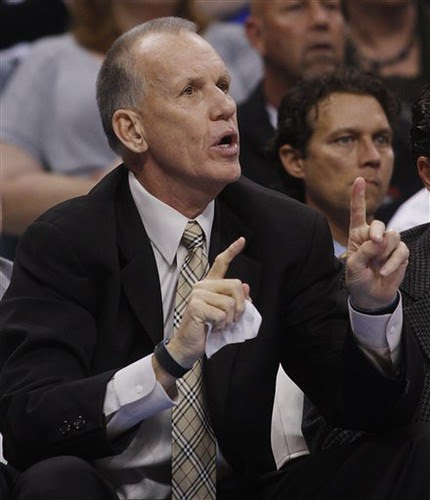 "Basketball is a game of mistakes"
Mistake #1 -- Hiring Doug Collins 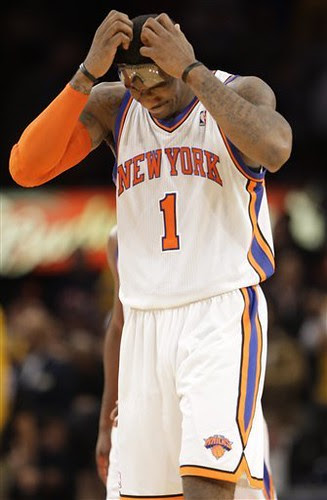 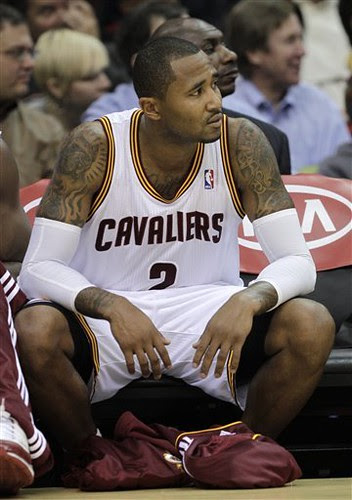 Nationally Televised Games:
Celtics at Heat, TNT, 8pm: The current injury report for the Celtics has both O'Neals day-to-day. That might as well just stay on the injury report the entire regular season, right? Just save them the trouble of typing it out each week.

Lakers at Nuggets, TNT, 10:30pm: Considering how screwed up and unpredictably bawful this week has been, I can totally see the Lakers somehow losing in a fourth quarter collapse to the Nuggets. (Wait, Arron Afllalo is covering Kobe? Nevermind.)

All The Other Games:
Warriors at Bulls, 8pm: Good thing for the NBA this one isn't on national TV. The Warriors have averaged 91 points on 38% shooting in their last nine trips to Chicago, even though they've averaged nearly 109 points per game since 2006 otherwise. (I can hear The Superfans chanting "DA BULLS" right now in between bites of hot wings)

Dan B. said...
Hate to be a great big homer, but aaron afflalo was almost on the nba all defensive second team last year.

Go read the comments sections from the past few posts, that's what I'm referencing. (I can't remember the last time I even watched the guy, much less remember how well he played defense...)
11/11/2010 4:17 PM

Wild Yams said...
Man, check out this article on CBSsports.com just ripping the Heat apart: Heartless, gutless Heat not worth your hate

Czernobog said...
@Wild Yams: Oh boy, I'd hate to live in the same black & white world as that guy does.

He conveniently ignored the fact that the Heat curb-stomped the Magic, one of the NBA's top teams, in between losing to those other teams in a season opener against a veteran team and an utter statistical aberration game against Utah.

Will they win a title this season? No, not unless Gasol is injured during playoff time and a bunch of other stuff goes their way. Are they as bad as he makes them out to be? Hell no.
11/11/2010 4:55 PM

LotharBot said...
Dan B. , like the comment Silvio made about Afflalo giving up 31 points to Mike Dunleavy Jr.? I wish I could've nominated that comment for "worst of the night".

Afflalo didn't guard Dunleavy *at all* that game. Dunleavy dropped 31 on such noted defenders as Carmelo Anthony and JR Smith. Afflalo was on the bench for 18 of those points, and covering either Collison or Granger for the rest.

As far as I can tell, Silvio doesn't watch the Nuggets, he just reads box scores and assumes Afflalo was guarding the opposing team's SG. Anyone who actually watches the Nuggets would know AA defends the other team's best perimeter creator, while Melo/JR/Billups get guys like Dunleavy.
11/11/2010 5:16 PM

Unknown said...
@Wild Yams. I can't believe all the Heat-hate articles trying to get in front of tonight's big nationally televised game. It's like they know people will read them.

The last thing I want to be is a Heat apologist, but to call this team gutless is stupidity. They've lost all three of their games by a COMBINED 13 points. You can't call a team gutless (or crappy, or lousy, etc.) if that team with no inside presence loses by an average of 4.2 points per loss, and wins by an average of 22.6 per win.

Woj put up a Heat-hate article as well today: http://sports.yahoo.com/nba/news?slug=aw-rileyheat111110

The "unnamed executive" in the Yahoo article reeks of Dan Snyder giving up Comic Sans and having Woj do his writing for him.

Luke said...
I unenjoyed in person the Kings-Wolves game last night. It was a bawful one for the ages, with especially turrible coaching by Westphal. Highlights include:

1. A half-empty building (good for me because I paid for the cheapest upper level ticket but was able to sneak into the 8th row aligned with center court)
2. Lacktion Jackson's career night (11 pts in 23 mins)
3. Michael Beasley's career high 42 pts
4. Westphal major coaching boner #1: leaving Tyreke in the court with 5 fouls, causing him to promptly foul out of the game with 9 mins to go in the 4th quarter
5. Westphal major coaching boner #2: claiming that he played Dalembert, Jason Thompson AND Lacktion Jackson together to try and stop Beasley from scoring.
6. Wolves playing Maurice Ager as a backup point guard for extended stretches, and immediately waiving him after the game was over. http://www.usatoday.com/sports/basketball/nba/2010-11-11-1940803524_x.htm

Silvio said...
Off topic, one note about Hollinger's PER.
1-6 Rockets : http://espn.go.com/nba/team/stats/_/name/hou/cat/PER/houston-rockets
All but one Houston player have positive PER, indeed 12/14 players are with PER of 10+.
Average PER for all 14 players is 14.6. For example 7-0 Hornets average for 13 players is 13.4 : http://espn.go.com/nba/team/stats/_/name/no/cat/PER/new-orleans-hornets

Obviously, PER is purely offensive measurement. It does not reflect fact that Hornets are 3rd best league defense with 98.2 points allowed per 100 possessions, while Rockets are 28th with 110.3. Not comparable, with 2 offenses being comparable. Luckily, league standings reflect it.
11/11/2010 7:23 PM

SirGirthNasty said...
Does anyone else think that the Miami offense is atrocious. The beginning of the second quarter interview with Doc Rivers started with him being asked, "How do you stop Eddie House".

Ak dave said...
Half expected McHale to say "I don't care what you gotta do- clothesline somebody if you have to!" in his halftime analysis.

Laurance said...
don't know where to post but for tomorrow's WOTN, unintentional dirty quote machine. Erik Spoelstra: "We have to keep grinding with passion"
11/11/2010 9:29 PM

stephanie g said...
At half I expected LeBron to hold another hour long special where he announcers he's taking his talents to Beantown.

Best moment of the game so far: Jesus for 3 smooth as butter, smirk to Reggie, LeBron "retaliates" by airballing it, probably killing a baby or something, cut to a confused Riley and a distraught woman.
11/11/2010 9:41 PM

Silvio said...
We could name this night "The night when Dan Gadzuric shot 8 times". Even more amazing, he hit 4 of those 8.
Dan played 20:42 minutes for Warriors tonight. Well, it gives new meaning to word desperation.
I mean, if Dan was last player basketball player on Earth and I'd have to draft team for game versus aliens ... I would pick Looney Toons and left Gadzuric undrafted.
11/11/2010 9:42 PM

eljpeman said...
Lebron's 3 pt shot hit the side of the backboard against the C's with time winding down and with a slim (stressing on SLIM) chance to win. I don't know how much more bawful you can get with that.
11/11/2010 9:58 PM


And the offense is atrocious. Its on Spotard (as we dubbed him). Lsat year I complained a lot with the iso/pick and roll = whole offense. I thought it would change. Just disgusting.


And Bosh is pillowly soft. I see that now.

Paul said...
Had to screen shot this one as it might get deleted later.
Tweet of the night, courtesy of Paul Pierce

nightdreamer said...
How about Lebron's proof of being clutch?

Anonymous said...
Lakers usually play smart, but the way they lost tonight to the Nuggets was dumb. Seriously, jacking up three's when you're only down by four with a minute to go. Isn't this why they paid Pau Gasol a boat load of money? What the hell?
11/12/2010 12:23 AM

Jason D said...
It's games like this where the Lakers really piss me off. They play down to their competition, think it's fine to let them back into it and then try to stop them when they have all the momentum. I've lost count of the amount of games they've either lost or have let finish far too close because of it.

Wild Yams said...
Tonight's Laker game looked like a real throwback, and not in a good way. Gasol hasn't looked that soft since 2008, and Kobe going for 30+ shots in a losing effort is classic Kobe. The Lakers taking 29 threes is total lazy basketball (although in Kobe's case, his 10 3-pt attempts were all "hero shots"). Also, only 26 minutes for Lamar Odom? Maybe Gasol's 44 minutes at altitude explain why he looked so soft out there. Phil looked to be experimenting with a lot of small ball out there tonight for some reason, but weirdly kept Odom on the bench for it.
11/12/2010 12:45 AM

Czernobog said...
From a Wojnarowski column (lay off me, I'm bored):

"The Heat now face the very real prospect of falling to .500 on Saturday, because there doesn't appear to be any reason why the Raptors won't be capable of exposing Miami's defense the way the Celtics did on Thursday and the Utah Jazz did two days earlier."

Marylander said...
Was anybody able to read the notes on Pat Riley's papers?

I think the last line (underlined) was something like "**Fire Eric after the Thanksgiving" but i'm not sure. Can you respectable gentlemen confirm?
11/12/2010 8:34 AM

Barry said...
Truth is that without LeBron they'd never have come back to 3 points . Of course the real flaw is that Phil Jackson is not there, and another is that if LeBron is hogging the ball like that (and Udonis Haslem) the rest is never getting involved.

@stephanie: "Best moment of the game so far: Jesus for 3 smooth as butter, smirk to Reggie, LeBron "retaliates" by airballing it, probably killing a baby or something, cut to a confused Riley and a distraught woman"

Funny thing is, I can't remember when we started even considering whether Turkeygloo "would be ok" with coming off the bench. Has he become such a prima donna that he now demands to start? What have you become, oh NBA?

Craig Seger asks Jesus: "You don't like this team, do you? Tell us about that." to which he replies "We don't like anybody. We like ourselves. That's what we work on in practice." Awesome. I should work on liking myself more in practice as well- seems to be working for Ray Allen.

AnacondaHL said...
AK Dave - It's the money factor too. Any locker room feels awkward when the top 5 paid guys aren't in the starting lineup.

Suns need to build that chemistry and assertive unselfishness again, and Gentry needs to just start his 5 best players. This may involve putting faith in Frye at C and sending Lopez to the bench to work with Dragic again, and moving Warrick to PF.
11/12/2010 10:15 AM

Czernobog said...
@Aaron: That deserves a WotN. Hell, it deserves a WotM. Not only do the Craptors suck, they'll be playing a second night of a back to back after being trampled by the Magic.
11/12/2010 10:28 AM
Post a Comment
<< Home
Subscribe
RSS Feed
Mailing List