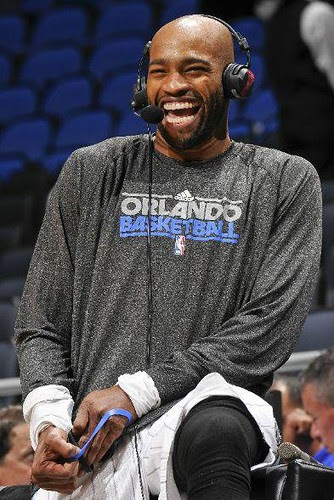 Vinsanity! What a laugh! This picture made me think of only one thing:

Well, it's official: NBA Elite 11 has been canceled by EA Sports. Apparently the demo full of hook shots from anywhere on the floor and Andrew Bynum "looking like Jesus" were just too much for EA to compete with NBA 2K11 and it's friggin' sweet Jordan modes. Understandable. EA has handed off the NBA Elite franchise to its Tiburon division that handles the Madden franchise. Great. Now we can look forward to it continuing to not improve for years to come!

Speaking of bad ideas, Philly is tearing down The Spectrum, and for $25 fans can go in for three hours and take whatever isn't bolted down. Perhaps if we're lucky only a few dozen people will be trampled/killed by flying batteries/mauled by evil Flyers fans in this would-be Thunderdome. This is almost as bad an idea as Bacon Soda (h/t JE Skeets). Well, actually, wait a second. I like bacon. I like soda. Maybe bacon soda would actually be good? No, wait, it has to be bad. But it's fried pig in liquid form!. (It's just a little liquified. It's still good! It's still good!) Oh damn it all, I'm so conflicted.

Also per Deadspin, Colin Cowherd is a douchebag.

You need to take a peek at this delightfully random Tumblr page: Bread People. Here's an example: 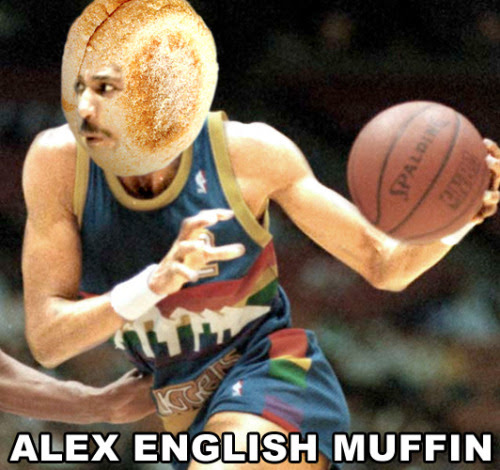 This is the Internet for you
And this has absolutely nothing to do with basketball (well, aside from it being almost as ugly as Sam Cassell), but this is too awesome not to share: close-up photos of the comet Hartley 2. 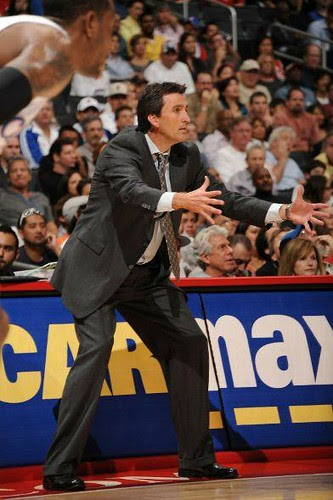 Caption this!
What is Vinny Del Negro doing? 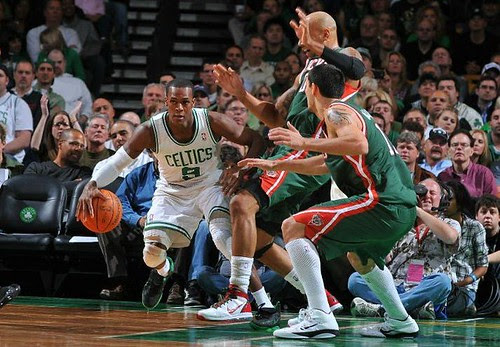 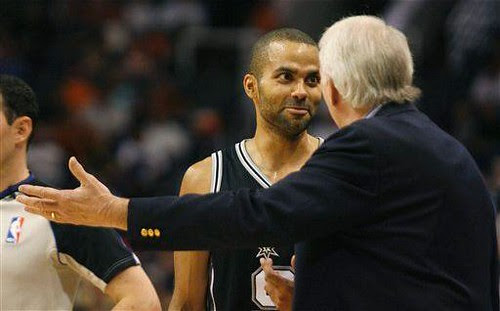 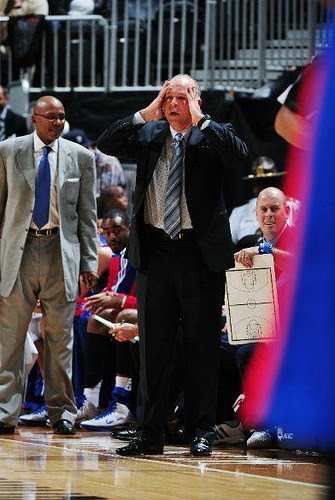 Ladies and gentlemen, John Kuester, head coach of the Detroit Pissed-Ons. (Thank you for that name, JJ) 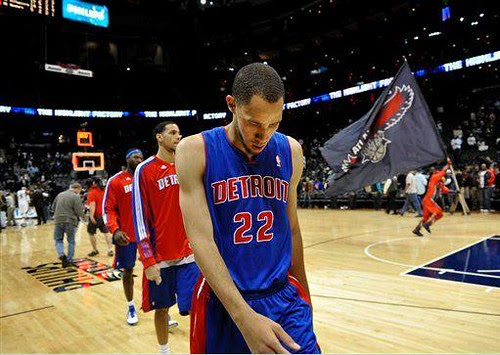 Wow... Somehow this is even sadder than a Sad Bench photo 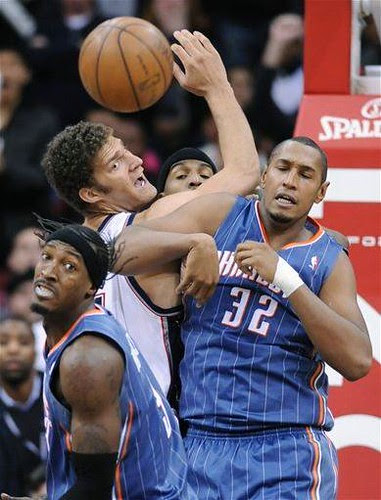 A pictorial summary of the Nyets-Bobcats game 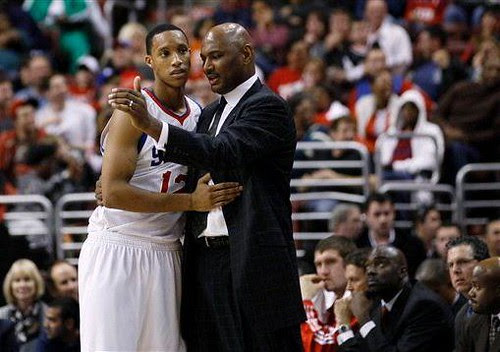 The player/coach relationship is a very, um, intimate one 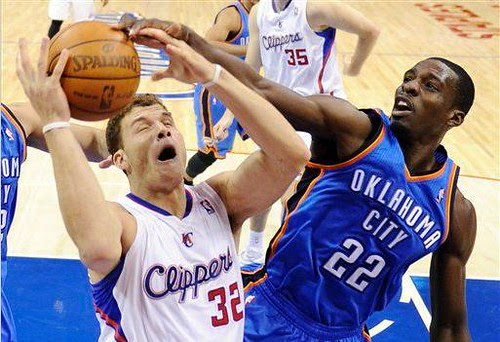 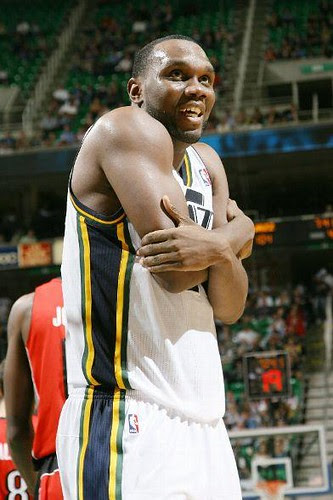 "Ohh, this beatdown we're putting on the Craptors, it's sooo cold..." 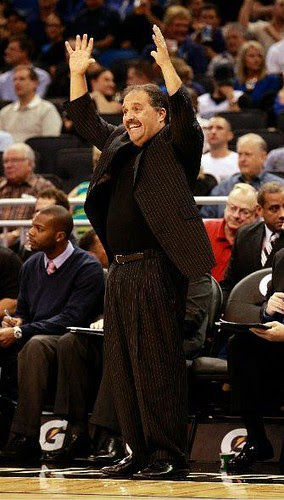 Okay, serious question, didn't the NBA mandate that Stan Van Gundy had to wear a tie this year? 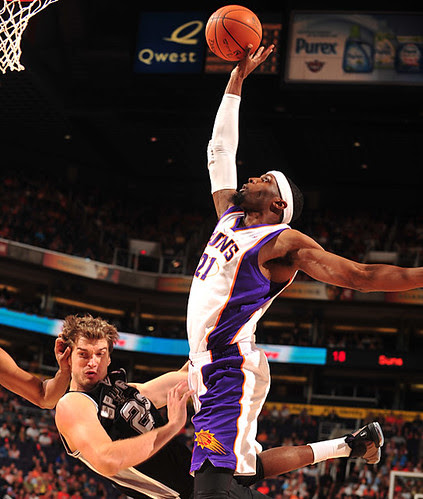 Nationally Televised Games:
Knicks at Bulls, TNT, 8pm: Fun stats of the day: Amar'''e has scored more than 20 points just once this season. Also, the Bricks are on a 2-17 stretch in games at Chicago. But hey, at least it isn't raining asbestos! Moral victories, folks.

Thunder at Trail Blazers, TNT, 10:30pm: Pro Tip: Shooting better than 39.3% from the field for the season may help you win more basketball games, Oklahoma City. 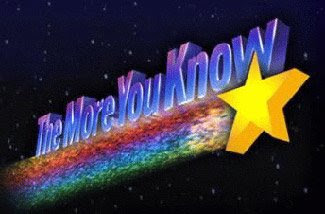 Barry said...
Bacon Soda? That completely boggled my mind. Like Baconnaise. I can feel my arteries clogging just looking at that bottle.
11/04/2010 3:57 PM

Anonymous said...
Do they not see that repeating the inane bullshit Colin Cowherd's diseased mind spews out is like letting the terrorists win?
11/04/2010 4:00 PM

Big-UpsTo#15 said...
If yall like South Park and don't think too highly of King Crab; you'll love this...

geared tuner said...
You might need an update on the Thunder-Blazers game: Blazers' rookie guard Elliot Williams is now likely out for the season with a dislocated patella. The curse continues!
11/04/2010 5:00 PM

As for Vinny- I believe he is showcasing proper hover dump technique (http://www.urbandictionary.com/define.php?term=hover+dump), nonetheless the clippers are going to catch herp anyways.
11/04/2010 5:16 PM

Czernobog said...
Grab yourself a can of pork soda,
you'll be feeling just fine,
Nothin' quite like sittin' 'round the house,
slurpin' up them cans o' swine.

The business with Al Jefferson was hilarious, he was called for a foul and that was the only way he could think of to gesture "I didn't do it" without risking a tech.
11/04/2010 5:44 PM

Paul said...
Caption this!
What is Vinny Del Negro doing?

Near the end of the video it looks like KG swings his elbows and Bogut reacts with a push. Both idiots?

Sorbo said...
Any bacon soda mention needs a shout out to Primus and their song "Mr. Krinkle" from the album Pork Soda. (http://www.youtube.com/watch?v=TOdo7dhvSwg&feature=related) I would have linked the song "Pork Soda," but it sucks.

Colin Cowherd is terrible. I've tried to listen to his show, and it's basically a mix Glenn Beck vitriol with the worst homer sports radio jock you can think of.
11/04/2010 9:04 PM

Solieyu said...
Just looked through some of the Cowherd stuff, and have to wonder who would listen to that kind of crap. And what the hell, Disney? Why are you paying this guy to spew this vile hate-speech? I'm so disgusted I'm just going to boycott all espn programs, not that they're especially informative, but the very fact that they would employ someone like that and encourage him makes me want nothing to do with the network. This just completely ruined my mood. Ugh.
11/05/2010 12:50 AM

ESPN note
"The stat, courtesy of ESPN.com's Tom Haberstroh, informs us that 16 of the last 17 teams to go unbeaten in the preseason -- as Memphis just did -- have gone on to reach the playoffs. Tantalizing stat if you're a Griz fan."

Question:
Is it my impression, or Pritchard was one of the worst GMs ever in drafting?? I mean, he gets all the love for trading Tyrus Thomas for Aldridge, but we are talking about the man who passed on Deron Williams/Chris Paul because he was "commited" to Sebastian telfair, and chose Oden's Schlong over Durant. Those must be on the top-10 of dumbest draft moves of the decade, no??
11/05/2010 8:46 AM