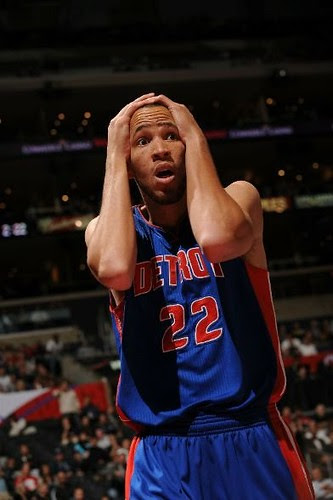 Tayshaun's Prince's recreation of Munch's The Scream is admirable, even if the hands are a little too high
Why in the hell is LeBron nominated for Time's Person of the Year? Aside from screwing over Cleveland on national television, shouldn't he be disqualified for stealing a tablecloth right off some poor, unsuspecting table and wearing it as a shirt? That being said, the world breathed a sigh of relief -- LeBron's ego-stroking movie has been canceled.

Remember that link I posted a few days ago introducing you to the world of Bacon-Flavored Soda? Well, I have found a review. It sounds just as vile and wrong as I anticipated: "The bacon soda’s smoky and sweet flavor tastes like Jones Soda figured out a way to bottle the things that make babies cry: smoke and candy taken away from babies."

Breaking footbawful news: Donovan McNabb has agreed to a contract extension with the Redskins. A FIVE year, $78 million extension worth up to $88 million with incentives. SNYYYYYYDER!! In case you didn't remember, this is the same 34 year old McNabb who was benched in favor of Rex Grossman recently in a two-minute drill situation. I have no joke that can possibly be funnier than the reality of this situation. Just soak it in for a few minutes. 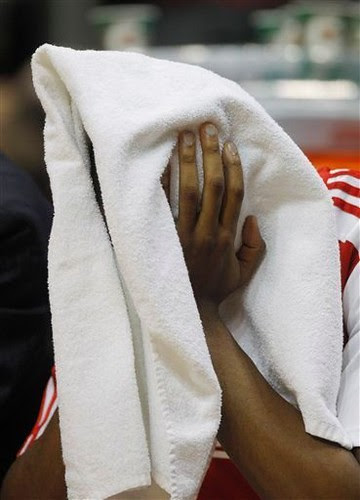 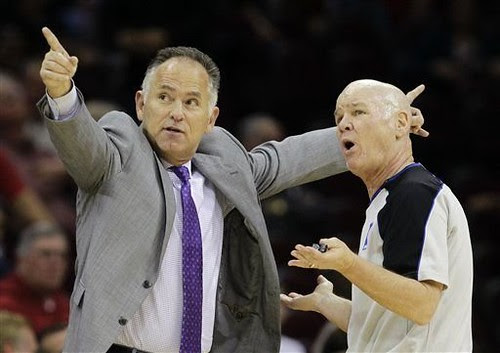 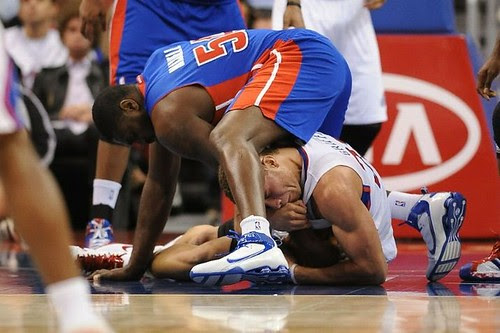 Blake Griffin does NOT want to be teabagged 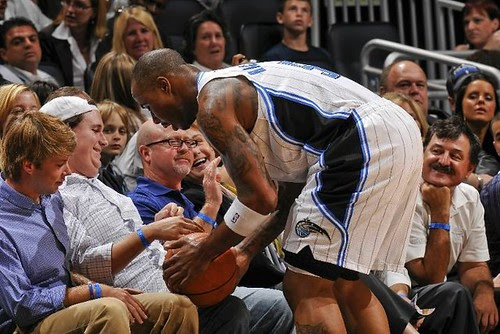 "Come on, dude. You look tougher than Vinsanity. Suit up! We could use you!" 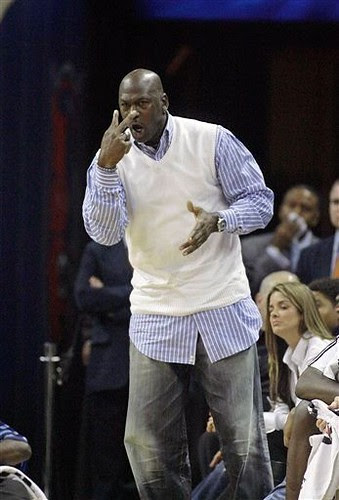 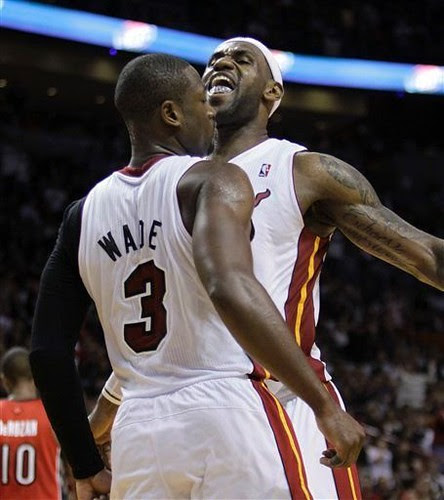 I knew LeBron and D-Wade were close, but...
Nationally Televised Games:
Grizzlies at Magic, NBA TV, 7pm: Is it possible the Magic will lose three straight home games? If so, will Stan Van Gundy completely lose his voice by the end of the night? That could be entertaining.

All the Other Games:
Timberwolves at Bobcraps, 7pm: Why must the bad teams have to beat up on each other every single night this season? (For our amusement, obviously, but it artifically inflates their records, so it can only be amusing to a point...) The Bobcraps will probably get their first home victory of the season tonight, but honestly, who really cares? Perhaps these two teams should try to recruit this girl to fix their offensive woes:


Hornets at Mavericks, 8:30pm Trevor Ariza opining on his team winning with defense rather than offense: "We know our offense is going to come. We've got players here that can score with the basketball." Well, that's nice. It's awfully hard to score without the basketball, after all.

Nuggets at Suns, 9pm: I betcha the Nuggets sure glad the Suns got their three point barrage game out of their systems before playing them. It'd bring on flashbacks from that hellish Pacers game if they started raining those threes on the Nuggets.

Thunder at Jazz, 9pm: The Jazz are somehow going to find a way to come back from being down by 50 points at halftime before this season is over, mark my words.

Pistons at Warriors, 10:30pm: Well, so much for that hot start by Golden State. The Warriors are falling apart like an ice sculpture in a sauna, and David Lee's infected elbow isn't helping matters.

Nyets at Clippers, 10:30pm: Instead of watching the Clippers be who we thought they were, go watch this clip instead (via Deadspin). Trust me. It will be the greatest thing you do all day. (You know, unless you save a kitten from a tree or something. Then watching this would be the second greatest thing you do all day.) Who cares if it's apparently staged? It's still awesome.

zyth said...
@person of the year : he has to contend with sarah palin and lady gaga, so...yeah.

The Dude Abides said...
Little-known fact: Isiah Thomas was secretly hired by Daniel Snyder over the summer as a salary cap consultant/assistant to the GM.
11/15/2010 4:29 PM

Wild Yams said...
Just FYI, the Time Person of the Year doesnt mean "best person of the year", but rather just who was either the biggest story of the year or who most typified the year. Hitler and Stalin are both former winners, IIRC.
11/15/2010 4:29 PM

Czernobog said...
@Yams: It's supposed to be an award for "most influential." It's lost all credibility a while ago with such luminaries as "Endangered Earth" and "You" but for James to be anywhere near that list is hilarious.

If we're doing Footbawful I'd like to nominate the Steelers' defence of all things. Give me fifteen uninterrupted minutes in the pocket and I might be able to complete a pass myself.
11/15/2010 4:35 PM

chris said...
Czernobog: We SO need to do a "Most Bawful Person of the Year" award every December or so, since there are plenty of amazing choices out there.

The Jazz are somehow going to find a way to come back from being down by 50 points at halftime before this season is over, mark my words.

And wanna bet it'll be the Purple Paupers that fall victim to that type of debilitating anti-victory?
11/15/2010 5:49 PM

Basketbawful said...
Look, people. McNabb may be about to turn 34 years old, but he ranks 29th in Completion Percentage, 15th in Total Yards, 18th in Yards Per Attempt, 26th in TD passes (tied with John Kitna!), 3rd in Sacks (behind Jay Cutler and Matt Hasselbeck), and 28th in QB rating...

...shit. Five years you said? AFTER this year?

Brian said...
"Perhaps these two teams should try to recruit this girl to fix their offensive woes."

1. Kahn.
2. They'd first have to go up by 50, so not the Paupers. And there's a whole lot of Bawful over there that we haven't even touched on, like trying to guess which of Westphal's immediate family members Donte Greene was caught having sex with.
11/15/2010 6:00 PM

Will said...
These pictures become much funnier if you imagine that the correspond with one another. For instance, I think Jordan is giving Tayshaun The Look.
11/15/2010 6:21 PM

Dan B. said...
If we're doing Footbawful I'd like to nominate the Steelers' defence of all things. Give me fifteen uninterrupted minutes in the pocket and I might be able to complete a pass myself.

No shit. I'm a Steelers fan, and I wanted to heave myself to the bottom of a deep well last night just to relieve myself of the pain. They couldn't stop a kid on a tricycle. And the Steelers offense wasn't much better until garbage time. (STOP HOLDING THE DAMN BALL FOR TWENTY SECONDS, ROETHLISBERGER!!!) I'd also like to mention Jeff Reed chunking a 26 yard field goal attempt was just depressing. Cut him, plzkthx.
11/15/2010 6:30 PM

Dan B. said...
These pictures become much funnier if you imagine that the correspond with one another. For instance, I think Jordan is giving Tayshaun The Look.

Whenever possible, I try to tie them together because, yes, it does make thm even funnier. (Fun fact: the Jim O'Brien picture and the Jeff Teague towelhead picture both reference Towelie from South Park.)
11/15/2010 6:32 PM

DKH said...
No real comment on the McNabb situation, except to note that contracts aren't guaranteed in the NFL. So it's a 5-year contract, but...

1) thank you for taking the first step and unleashing football comments upon us. YES!

Anyway: When I saw that McNabb headline, I thought "Who did he catch fucking the commissioner's wife to blackmail for THAT contract??"

I hope none of that money is guaranteed, or else the 'Skins just screwed themselves. I think this is as good a time as any to share this gem of a quote from our beloved Chad Ochocinco (whose name rocks, btw):

"If anyone else out there feels that Rex Grossman gives the Washington Redskins a better chance than Donovan McNabb to win a game with two minutes left on the clock, they need to slap theyself."

@johnhollinger Hadn't realized Isiah Thomas was the new GM of my Redskins. These next five years should be a hoot.
about 2 hours ago

Does Hollinger read Basketbawful's comments section? Of course, it's an obvious joke to make, as that was my immediate reaction to the McNabb news.
11/15/2010 7:02 PM

RT said...
I have a vid that, I believe, tops the one you posted. Same vein, similar premise, a little less staged. It just might be even better than saving a cat from a tree.

Hell, I bet you could miss at least half of this week's games and still be okay because of the vid below.

Fishy said...
I want to know at one point in that girls life she decided that she wanted to master an arcade basketball game... not bashing, because I'm oddly jealous. But wow.
11/15/2010 8:41 PM

Dan B. said...
Ak dave -- Gonna have to watch that fight in a little while. Looks promising. (I'm a boxing fan, don't like the UFC type MMA stuff that involves a ground game and wrestling, but kickboxing is something I can dig) Also, I love how the Youtube description of the fight includes the phrase "an absolute slobberknocker." That's gold.

RT -- Also, I guess the Sixers still haven't "earned" the right to be re-dubbed as the Suxers?

I've referred to them a few times as the Suxorz or variants of that, but for some reason it just doesn't seem as fun as some other nickname we use, so I tend to use it less often. (Bobcraps, for example, just makes me smile for some reason no matter what)
11/15/2010 8:48 PM

Rad E Cool said...
It wasn't covered on the worst of the weekend, but I just wanna give Kyle Korver some long overdue praise.

You've immortalised his "duck out of the way" defense against dunks in the montage at the top of the page, but I think that is actually smart defense.

Basketbawful said...
For the record, $40 million of McNabb's contract is guaranteed...

Sorbo said...
Sorry, this has nothing to do with basketball or anything. In fact, it's a fairly lame fantasy football story...but I just lost by 0.07 of a point. Seven-hundredths of a point. Please, someone make me feel better and tell me a worse fantasy league story, bball or otherwise.
11/15/2010 11:46 PM

I'm not even going to try and downplay this. It takes a half minute to get rolling, but combined with the coincidence of today's Timberwolves chat, this had me uncontrollably laughing through the end of the video
11/16/2010 12:14 AM

diana_arellano said...
With the plethora of bad teams we are seeing this season, I think you should revisit the original idea of naming the blog NBAwful. Could Stern even complain at this point?
11/16/2010 12:49 AM

Clifton said...
The Nuggets, as a team, had one assist in the second half tonight.

I'm starting to think this Suns season may not be a total giant bucket of crap after all.

Stockton said...
When can we have a WoTN for the Eastern Conference and those analysts who predicted (AGAIN) that the "power shifted to the East"?
I know it's early, but once again we'll have 9 to 10 teams above 50% fighting for a playoff spot in the WC, at the same time some New Jersey Pacers dig up some 40 win-record to earn 7th or 8th position...
11/16/2010 7:49 AM

Earlier this season I beat my boss by less than a point.

Oh, wait... That's not a bad fantasy football story, it's a good one!

Wormboy said...
What the hell happened to Jordan's fashion sense? Did he go dumpster diving? Stupid faded jeans. Over-sized button-down shirt not tucked in. Which is OK I guess except the over-sized. But a sweater vest over an untucked over-sized shirt? FFS Mike, you own a basketball team! Don't dress like some dumbass frat boy without fashion sense.
11/16/2010 11:44 AM
Post a Comment
<< Home
Subscribe
RSS Feed
Mailing List