Friday, October 22, 2010
Kicking Cavs fans in the crotch comic book-style
By Basketbawful at 8:22 AM
9 comments

For comic book fans like me, this feature is like giving your brain a delicious cookie covered in chocolate chips and Scarlett Johanssons. I loved it. Sure, there was some (presumably) unintentional comedy, like the (very appropriate) "Pistons: Destination Doom" cover or the "Grizzlies: On The Prowl" cover where a front-and-center Rudy Gay is cheering on a particularly gay looking Captain America.

Oh, I also liked the Bulls cover with Carlos Boozer as the Red Hulk. Uh, the Red Hulk jumped into outer space and beat the crap out of Thor with his own hammer. Boozer broke his hand in three places tripping over a bag. I'm just sayin'.

On the other hand, some of the covers were just plain mean. For instance, the covers for the Hornets and Nuggets focused on Chris Paul and Carmelo Anthony leaving their respective teams. I get that. I do. I mean, the imminent and seemingly unavoidable prospect of losing their superstar is a team's most cogent storyline, right? But it's still kind of a bitch slap to the guys who are, you know, sticking with the team and trying to win games and stuff.

That said, the biggest kick to the crotch was reserved for fans of the Cleveland Cavaliers. A few short months after suffering what may have been the most painful heel turn in the history of professional sports -- I mean, seriously, their superhero broke up with them on a live television show specifically dedicated to him breaking up with them -- now Cavs fans have to deal with this? 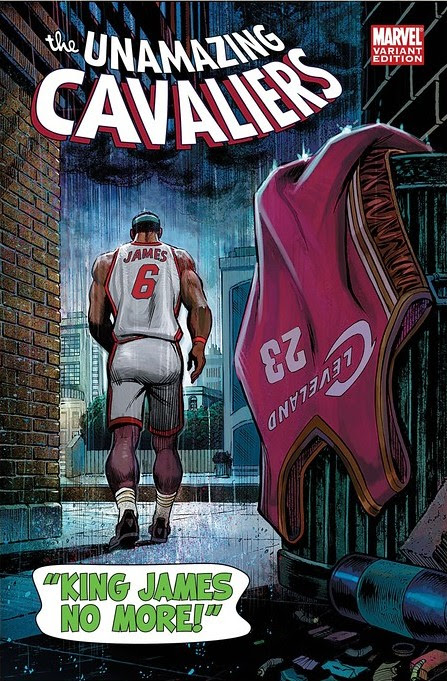 If you don't know your classic comic book covers, this is riffing the iconic "Spider-Man No More!" cover, which is famous enough to have its own Wikipedia page.

Sure, it's reasonably accurate. LeBron walked away, probably after stuffing his jersey into the nearest trash can, and so the team is pretty unamazing now.

But man, throw these people a bone, ESPN!

Personally, what I would have liked to see was an extended scene from The Amazing Spider-Man #33, where Spidey is (seemingly) hopelessly trapped under a giant machine, but then he gets really pumped and pushes the damn thing off him.

That's what I want to happen for the Cavs and Clevelanders everywhere: Them pushing the giant, crushing, lethal weight of LeBron's departure off their backs and delivering an antidote to Aunt May in the nick of time before she dies of radiation poisoning. Or something.

It's probably not gonna happen...but it would be a nice story.

Unknown said...
Just got The Magazine yesterday, and it had all the team covers in it. Some of them were really good )(Lakers, Celtics, Bulls), some were boring (Sixers), and others were too on the nose (the Suns cover) and eye roll worthy.

The Raptors nod was pretty awesome, and the Knicks cover was pretty funny with each Superstar crossed out (yet the city is still excited), but the worst was the Magic/Dwight Howard cover. You have living cartoon character/porn star Stan Van Gundy...and you don't use him?!? Whaaaat?
10/22/2010 10:39 AM

AnacondaHL said...
Unintentionally hilarious one is Atlanta, with Joe Johnson getting copped a feel.

Wormboy said...
Yes, I'd give a lot to see the Cavs beat Miami in the playoffs this year. But me winning the Nobel prize for medicine is more likely. I suspect that Miami with any one of its trio healthy will beat the Cavs in the playoffs, on the off chance that the Cavs get to the playoffs.
10/22/2010 6:41 PM

Anonymous said...
Wow, I'm surprised at a lot of these artists here. Dave Johnson, formerly of noted comics/humor blog Dave's Long Box... the incredibly infamous Greg Land (whose covers are, of course, the worst of the bunch)... and Kyle Baker, who isn't especially known for his Marvel work and does a really strange looking Mark Cuban. Wow, and Skottie Young, who is actually toning it down quite a bit here by drawing things instantly recognizable as human beings.

I'm slightly more surprised that I'm seeing this on the internet first even though I actually subscribe to ESPN the Mag. The hell is up with my magazines always arriving late?

The sad thing for Cavs fans is I don't see any potential heroes in the team. People are probably thinking JJ Hickson. Jamison's likeable enough. Mo, puhlease.
10/23/2010 7:41 AM