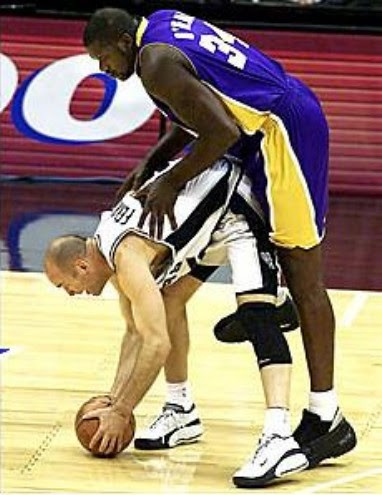 Seems only fair, right? After all, that's what
Ferry did to both the Clippers and the Cavaliers.
With the second overall pick of the 1989 NBA Draft, the Los Angeles Clippers selected Danny Ferry.

Due to his all-around skill set -- Danny became the first player in ACC history to amass 2,000+ points, 1,000+ rebounds and 500+ assists during his college career -- Ferry was tagged as The Next Larry Bird, which made him a no-brainer lottery pick.

And nobody does "no brains" quite like the Clippers.

So The Other L.A. Team went ahead and chose Ferry ahead of guys like Sean Elliot, Glen Rice, Tim Hardaway, Shawn Kemp, B.J. Armstrong, Vlade Divac, Cliff Robinson, etc. (Of course, it could have been worse. The Kings used the number one overall pick on Pervis "Out of Service" Ellison. Sorry, chris.)

There was only one problem: Ferry flat out refused to play for the Clippers.

Of course, in retrospect, being rejected by Danny Ferry should make the (admittedly short) list of Great Moments in Clippers History, right behind Elton Brand leaving for Philadelphia.

Anyway, Italy was good to Ferry. He was bigger than the Beatles there. The people loved that pasty white dude. During his one-season stay in Europe's Boot, Ferry put up strong numbers (23 PPG and 6 RPG) and led Il Messaggero into the playoffs.

But the siren song of the NBA was still ringing in Ferry's ears. On November 16, 1989, the Cleveland Cavaliers obtained Ferry's draft rights (and Reggie Williams) in exchange for...

...Ron Harper (who was their leading scorer), two first-round draft picks and a second round draft pick. Believe it or not, it gets worse. The Cavs then signed Ferry to a 10-year guaranteed contract worth almost $40 million. Do yourself a favor and don't translate that into 2010 dollars, unless you want to spend the rest of your life hating your miserable life.

Ferry seemed lost on offense (Offensive Rating = 98) and overwhelmed on defense (Defensive Rating 110). The next season, he got hurt and actually regressed as a player (5.1 PPG, 40 percent shooting). The absolute apex of his career was during the 1995-96 season when he set career highs in MPG (32.7), PPG (13.3) and RPG (3.8). Unfortunately for the Cavaliers, Danny would never again put up such lofty numbers. And Cleveland was stuck with him, because every other NBA team recoiled from Ferry trade offers like the Cavs were trying to hand them a pile of rotting meat crawling with maggots.

After a full decade of horror, the Cavaliers let Ferry walk away in free agency. They probably would have chased him away with torches and pitchforks if they hadn't been choking on their own tears of hate and regret.

Stunningly, Ferry's career wasn't over. The Spurs signed him to a three-year deal that netted him another $6.5 million and a shot at glory. In all fairness, Ferry was a deadeye shooter off the bench for the Spurs. During the 2000-01 season -- his first in San Antonio -- Ferry ranked fifth in the league in three-point percentage (.449). The next season, he hit 43 percent of his threes (although he played only 50 games).

However, his last season with the Spurs was by far the worst of Ferry's career. He played only 9.4 MPG, averaging a mere 1.9 PPG on 35 percent shooting from both the field and downtown. His Offensive Rating was 90, his Defensive Rating was 104 (and remember that the Spurs were one of the best defensive teams of that era), and his Player Efficiency Rating was 5.1.

In those 16 postseason games, Ferry went scoreless 12 times, assist-less 11 times, and rebound-less nine times. By the time the Spurs were in the NBA Finals against the New Jersey Nets -- easily the worst team San Antonio faced in he playoffs that year -- Gregg Popovich had lost whatever confidence he'd had in Ferry. To wit: Ferry appeared in only half of San Antonio's six Finals games, putting up three one trillions.

That's right: Danny Ferry averaged a trillion for the Finals. That was his entire contribution to the cause. (Make that non-contribution...a great, great moment in lacktion history.) But the Spurs won anyway and, just like that, Ferry was an (kill me) NBA champion.

Ferry's playing career was over, but he wasn't done screwing over bad teams. On June 27, 2005, he signed a five-year, $10 million deal to become the general manager of...the Cleveland Cavaliers. That means the Cavaliers ended up paying Ferry almost $50 million over 15 years. Twice! He fleeced them twice!

And remember: It was Ferry who assembled, disassembled and reassembled the various rosters that weren't quite good enough to help LeBron James win it all. Seriously, almost every deal Ferry made felt like an "OMG!! WE CAN'T LOSE LEBRON!!"-style panic move. Now LeBron is in Miami and Ferry left the Cavaliers after what I'm assuming was a not-so-gentle push out the door. Again.

But he has a ring.

Dan B. said...
Danny Ferry is a prime example of why this blog needs to exist. Averaging a trillion in the playoffs and having a PER that normally can only be achieved by physically murdering your teammates while on the court... That's just impressive.

Basketbawful said...
Danny Ferry is a prime example of why this blog needs to exist. Averaging a trillion in the playoffs and having a PER that normally can only be achieved by physically murdering your teammates while on the court... That's just impressive.

I checked Hollinger's PER reference guide, and Ferry's registered as "Legally Deceased." So, yeah.

Somehow, I knew you'd do that, AnacondaHL.

Tomorrow will be dedicated to the 2004 Pistons, so I suppose that our good friend Darko will get a shout out.

I guess The Apostrophe went to the Danny Ferry school of rebounding.

JJ said...
I was wondering why Danny Ferry seems to have no trouble landing a contract after another, whether as a player or as a part of management. The picture explained everything. Thanks.
9/02/2010 9:56 AM

I love how the purple paupers get dragged into almost every single of these "Worst NBA Champions" posts! Shows you what bad luck, fate, and bad management can do. :P
9/02/2010 10:27 AM

Unknown said...
I love everything about that picture. From the expression on their faces to Shaq's hand placement. F'n awesome!

Poor Clippers. They thought they were going to have the best young frontcourt in the league with Manning and Ferry. Think of all the great nicknames had those two stayed healthy or were good: ManFerry, The Dannybrook Gang, Dannys Grand Slams, Dan Yankees.
9/02/2010 10:50 AM

Basketbawful said...
I love how the purple paupers get dragged into almost every single of these "Worst NBA Champions" posts! Shows you what bad luck, fate, and bad management can do. :P

Ivorytower said...
Apparently the milkman always rings twice, he just resigned with... you guessed it the Spurs
/Duncan-face
http://sports.yahoo.com/nba/news?slug=ys-ferryspurs082510
9/02/2010 10:55 AM

49er16 said...
Danny Ferry is the person in my opinion who started "Duke Hate." An great player in college, drafted number one overall, ditched the Clips for Italy, and bomb in the NBA. Now we expect every Duke player to be a douche and suck in the NBA.
9/02/2010 11:01 AM

AnacondaHL said...
Well now that we're entering the 2004 and beyond championships, it seems like a ripe time to start incorporating Suns references too!
9/02/2010 11:11 AM

Dan B. said...
I have been trying to work the Kings into every post. Just for you, buddy! :)

It's not like you have to actually work to do that. The Kings sort of bring it upon themselves... (sorry, chris)

Holy hell, Da'Sean Butler wrote a crazy children's book and posted it on Twitter 140 characters at a time. It involves a "young boy" who is 22 years old, a purple dinosaur, and a jurassic pile of dino crap. Yes, you read that correctly.
9/02/2010 11:43 AM

Kanbe said...
I have been waiting for this article.....for years. I've always wondered how he got such a pass. And all this never even mentions the clenched face squint that was perpetually on his face. When he played for the Spurs, we would always literally hiss when there were shots of his face.

Hellshocked said...
I only got to see the older Ferry play, but even so when I found out he had been a #1 draft pick I was shocked. About the only NBA skill the dude posessed was his okay long range jumper and its release was so slow that he needed to be completely open in order to get it off. I don't think I ever saw him take more than two dribbles which, for a wing player, is rather telling.

stephanie g said...
Wait, what? 10 year guaranteed contract!? Words fail. I didn't know that was ever even possible. Was the contract animated by the spirit of Ted Stepien and written in blood on the skin of a goat?
9/02/2010 2:04 PM

Anonymous said...
Another gratuitous Nets bashing reference. Hey, the Nets were on a ten game winning streak going into the finals, including sweeps of both the Pistons and some chump franchise from Boston--forget their name--so don't even start that they were somehow worse than the Stephon Marbury lead Suns. I'll give you that the Lakers were better, and maybe the Mavs, but the Suns? Please. Fail.
9/02/2010 2:13 PM

AnacondaHL said...
Dan B - That Da'Sean Butler story is incredible. Now I'm even more bitter he didn't drop to the Suns in the draft.

Unknown said...
You can't do Darko tomorrow, that's almost too easy. The "Manna from Heaven" had no control over being on that team, unlike previous entries. Might I suggest a different route. Perhaps a certain coach who used to wear overalls during games?
9/02/2010 2:39 PM

The Other Chris said...
Could also go the 'Sheed route. He definitely deserves a spot in the "Wasted Talent Hall of Fame", together with fellow founding member Vince Carter.

Or Joe Dumars, for drafting the bum? I don't care what anyone says, that was a TERRIBLE pick. Blah blah potential blah blah. Did any of you watch the Final Four that year? Dwayne Wade gave the world a preview of the '06 Finals, and NBA GM's were still asleep at the switch. Look: when you pass over a sure thing (Brandon Roy, Chris Paul, D-Wade) for "potential" (Marvin Williams, anyone?), your team sucks. Period. End of story.

Also Danny Ferry definitely deserves a spot in the "worst GM ever" HOF. Instead of trying to build around LeBron (clean house, dump bad contracts - Z, I'm looking at you, draft quality role players etc.), he made a series of moves that escalated in their short-sightedness and chances of failure. Ben Wallace? The Big Creaky? Jamison? Ugh.
9/02/2010 2:57 PM

Myarvydas said...
Actually, seems that Bawful picks players that brought zitch to the table. Hate Larry the Carpetbagger or Sheed if you like (I won't blame you) but you can't deny that they did help the scrappy Pistons defeat the big bad Lakers.
9/02/2010 5:10 PM

Pistoletti said...
I don't know if anyone here posted this yet:

Sorbo said...
Can we say that the whole pistons team didn't deserve it since a few lakers got injured right before the finals. Friggin Walton started a game in that series.
9/03/2010 1:35 AM

I would wager that having such a long-term high-dollar contract was a big part of why he was so terrible. He really had nothing to work for, and not everyone is as winning-oriented as Kobe.

I wonder what the NBA would be like if players only received 1-year deals. EVERY year would be a contract year!