For those of you who don't know (a.k.a. everyone except Basketbawful), I am currently camping with the fam, so my ability to watch the finals may be significantly hampered here and there. Since Basketbawful was bummed I wouldn't be around for our post-playoff game chats involving mutual excitement / depression over the Celtics, I figured it was important to put up a post when I can for posterity:

Sometimes you don't remember a game for the game itself, but for the circumstances surrounding it, much in the same way you might remember a song differently because of what you were doing when you first heard it. I'm sure we've all lost our virginity to Crazy Train, which is why we all get hot and bothered when we see Sharon Osborne on TV. Wait, is that just me?

Anyway, as the fam and I haul our way to the Badlands of South Dakota, I'm concerned about how I'm going to watch Game 2 of the Finals at the local KOA (Campgrounds Of America). That's right, they spell Campgrounds with a K. One of the things I've realized about going West, is that you might as well be going South. Both regions have the same number of cowboy hats in the gift shop. Well, for the South, just pepper in a few Nascar caps, and in the West, the arcade games your children play at rest stops will involve shooting bison. I shit you not. Pre-game instructions involve a reminder to aim for the head or the heart to get a quality kill. Charming.

So I check in and the KOA lady starts circling my points of interest: bathrooms, general store, a pet park in case I need to walk my dog (I don't have one and never will). So now I'm starting to get nervous. The last time I visited a campground over a decade ago, I watched the Bulls play the Sonics in the Finals on a projection TV.

Not so in South Dakota.

"So if a guy wanted to watch the Finals..." I halt, realizing I need to be a tad more precise, "...the NBA Finals, where would he go about doing that?" She looks at me funny, and now I'm wetting myself, because I know it's at least halftime and I have yet to put up a tent and buy hot dogs or something for dinner. I'm trying to figure what time zone I'm in and how it translates to Eastern and dammit if I'm thinking to myself how not relaxing it is to have your team in the Finals while youre on a rustic vacation and yes, for just a second, I wish the Celts had lost to the Magic in the Eastern Conference Finals and saved me from this dilemma.

The woman points toward a back room.

"There's a little TV in the laundry room," she says with a shrug.

I approach the laundry room slowly, like it's a horror movie. Fortunately, like the standard, pre-terror its-only-a-scared-cat false alarm of most terror flicks, I find that the TV is a respectable 14-incher (this would equate to 32 inches by civilization standards), is color and has a cable connection. Praise Jesus. I find out later from the KOA handyman that he equipped this telly with cable not one week prior. I praise him for his aggressive march into the 20th century and check the score. Commercial. Dammit. No matter, I'll be back. 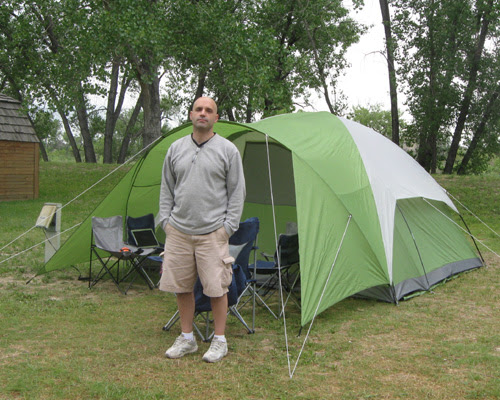 A man and his fabric castle. Despite the TV situation, they have Wi-Fi. Go Figure.
After tent setting up, food gathering and fire lighting, my son and I get back to the laundry room and watch:

The first thing I see is Ray Allen looking morose on the bench. This of course concerns me. To my relief, the C's are up 83-80 with 8 minutes and change left to go in the game. After a game recap, I realize he's probably thinking "I go 8-for-11 on three-pointers and we're still only up three?"

I don't know about you, but there's a certain comfort to avoiding or missing large portions of your team's most important games. When you come in late, you can know in a split second whether your team is:

- Keeping it close
- Taking a massive dump.
- Has an enormous lead.

This minimizes anxiety andoh, who am I kidding, I'm bummed I missed a lot of this one: Ray-Ray going all Ray Ray on the Lakers? Rondo looking like the Rondo who wants it? The Celts staying close even with Pierce and Garnett being anemic on the offensive end? Mark Jackson saying about Pau Gasol's big first quarter dunk, "They call this in the street, deliverin a pizza. Holdin it high."

You'll note I only quote MJ's catch phrases, and never any actual analysis: he's like Chris Berman in that all he has left is the Catchphrase. But unlike Berman, he's likable. P.S. In trying to figure out what I'd write about having missed 5/6ths of the game, I look up "Mark Jackson catch phrases" and come across a bunch of things a guy called GiveItToBurrito would like to hear Mark Jackson say, and it makes my day:

"Heaven to murgatroid!"
"Oh my stars and garters!"
"Come on! I mean, COME ON!"
"GET TO THE CHOPPA!"
"SEXUAL TYRANNOSAURUS!"
"Delicious."
"Suck my diiiiiiiiiiiiiiiiiiiiiiiiiiiiiiick!"
"Watch out for the big girl!"
"That's-a spicy meatball"
"Groovy."

See? You're smiling too. Can't you just hear Mark Jackson's voice? Me too.

Ok, yeah, so I saw the call that absolutely should have gone the Lakers way. We all know that out-of-bounds ball went off KG's hand, and the bad call was frustrating because I think the Celts were going to win anyway, but I hate it when a disastrous call like that puts the win in question and gives Laker fans something legitimate to gripe about. Oh well, I'll take it.

And I saw Doc Rivers sprinting out onto the court to avoid the 8-second violation. Incidentally, aren't coaches not allowed way out on the court like that? And why is Scal out there giving him a massage? It reminded me of wheelchair-bound Joe Swanson at the end of Family Guy Star Wars: "I MADE SANDWICHES!" There's Scal doing his best Swanson impression: "I MASSAGED DOC AFTER A GREAT CALL! YAY ME!" Sorry, Scal. You're going to be mocked no matter what you do.

And I saw Rondo showing off the ridiculous wingspan with the over-the-top steal on Fisher and the behind-the-back steal on Kobe. Both clean. Both scary impressive.

All in all, an exciting win for the C's and now it's a series. In MJ-speak, Game 1 for the C's was a solemn "You're better than that," and Game 2 was an emphatic "Momma there goes that man." I fully expect game 3 to be an "Oh my stars and Garters," whatever that means.

After the game on ABC, I wanted to watch a little post-game analysis, and ask the KOA handyman if the little TV has Sportscenter, because I can't find it.

Scotty Shaw said...
hey bawful, try espn360.com or atdhe.net or justin.tv if you wanna see the games. i know i sound like one of those website promoting comments, but for real, take it or leave it

I've done this same road trip before. Make sure to stop at Devil's Tower. It's pretty dope. Mt. Rushmore is also a mandatory stop off of 90.

Don't go to fucking Wall-Drug though. I don't care how curious the 500 billboards make you. Just... don't do it.

And for crissakes, don't stay at the KOA! It's cooler to camp inside the national parks. The Badlands has a great camp area, and so does Yellowstone and Devil's tower.

Wild Yams said...
ET - Are you following me?! I was in Rapid City, SD about a week ago (it's where I watched Game 1). Enjoy your trip, it's some beautiful country through there.