Several people sent in this, ahem, fascinating picture of Yao Ming and Dwight Howard. However, Stephanie G somehow managed to email it to me less than five seconds after it appeared on the Internet. (She must have her Google Alerts set up for "man love" or something.) But you've gotta love any picture where Yao looks like he's taking a dump on the court and Howard is watching like somebody just opened Marsellus Wallace's briefcase in front of him.

Oddly, of all the things going on in this picture, the most inexplicable (to me) is Jameer Nelson clutching at his own man region. I'll just assume he needed a quick equipment adjustment... 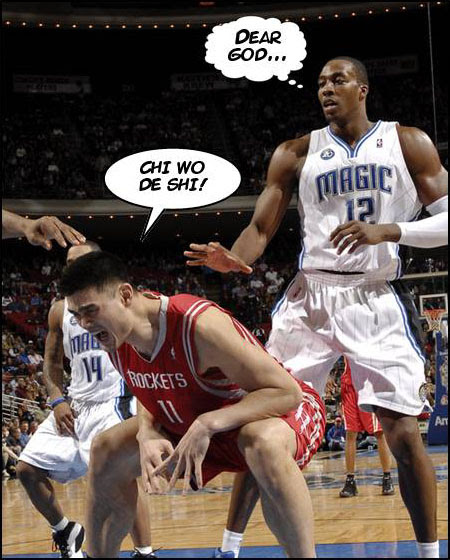 Anonymous said...
Kobe peed on the toilet seat in tha Lakers locker room and left it for the janitor to clean up, much to his teammates displeasure
12/02/2008 4:03 PM

Michael Hsu said...
I like how the hand on jameer's head looks like he's pushing him down like an oversized giant pushing a midget around.
12/02/2008 7:18 PM

Anonymous said...
It seems that Andrei Kirilenko has lost his mind and the medical staff at Utah are trying some old-school stuff on him. This is from the Jazz-Kings preview on nba.com:
"Jazz forward Andrei Kirilenko received a cortisone shot Monday after leaving Saturday's game with an ankle injury, and he's unlikely to play against Utah."
12/02/2008 8:51 PM