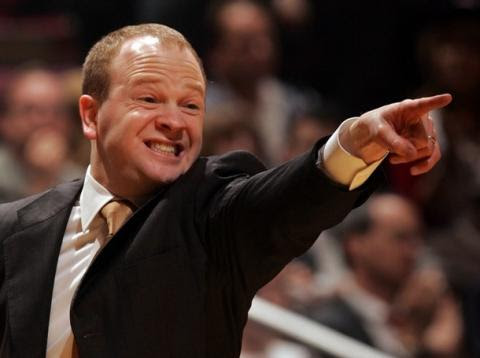 Word history: I've been using this term since 2004 (more on that below). It's a simple takeoff on the phrase dead cat bounce, which is defined as follows:

"A dead cat bounce is a figurative term used by traders in the finance industry to describe a pattern wherein a spectacular decline in the price of a stock is immediately followed by a moderate and temporary rise before resuming its downward movement, with the connotation that the rise was not an indication of improving circumstances in the fundamentals of the stock. It is derived from the notion that 'even a dead cat will bounce if it falls from a great height.'"

I coined the term in response to what might be the most famous example of a dead coach bounce in NBA history: When Lawrence Frank took over for Byron Scott in New Jersey. What's very well known is this. Frank's ascension to the coaching throne ignited a 13-game winning streak that ran from January 27 to February 24, 2004. The streak set an NBA record for the most consecutive wins by a head coach to begin a coaching career. It was also the longest winning streak of any coach in any of the four major professional sports to begin a career. During the streak, the Nets won six consecutive games on the road, which also gave Frank the record for most wins by a head coach on the road at the start of his coaching career.

What's less well known is this: After starting out 13-0 under Frank, the Nets went 12-15 the rest of the way. And, in fact, since winning his first 13 games, Frank has gone .500 since (184-184). Yet every season I read or hear about that career-opening streak...which means even almost five years later, Frank is still benefitting from the dead coach bounce.

Another notable dead coach bounce happened in 1994 when Magic Johnson took over the head coaching job in L.A. The Lakers -- who were 28-38 when Johnson took over -- won their first Magic-coached game 110-101 against the Milwaukee Bucks and even managed to win five of six (including a 101-88 victory over the soon-to-be NBA champion Houston Rockets) before ending the season on a 10-game losing streak...after which Magic wisely stepped down.

Jim O'Brien also enjoyed something of a dead coach bounce in 2000-01, when he helped a terrible Celtics team (who were 12-22 when Rick Pitino finally resigned) go 24-24 over their final 48 games. He lost his first game as the C's head man, but he won on his second try against a 50-win Miami Heat team. He also presided over 6-game and 4-game wining streaks, which was something that Pitino (102-146 in his four seasons in Boston) could only dream of.

More than anything the dead coach bounce is a testament to the degree to which most NBA teams loaf during the regular season (there are notable exceptions). With the sudden scrutiny surrounding a new coach, they actually will go for a few games playing at the level of guys getting paid millions, as opposed to guys punching a clock for an 82 game season. Now, take a look at the roster that Frank inherited. Is it really surprising that this group of chronic under-achievers managed an epic dead coach bounce?

What is even more amazing about the Lawrence Frank bounce is that he did it without Vince Carter, the player with arguably the greatest discrepancy between his potential talent and his actual productivity. Imagine how incredible that coach bounce could have been had Vince been on the roster! It boggles the mind. Then again, it could be argued that Vince could single-handedly kill any potential coach bounce. There would be many ugly forced shots involved, naturally.
11/26/2008 2:50 PM

Wild Yams said...
Another dead coach bounce of note was when Kurt Rambis took over as coach of the Lakers in the strike shortened season in 1999 after Del Harris was fired 6 games in. Under Rambis the Lakers started 11-0 before eventually finishing poorly enough so that Rambis was not rehired (though Phil Jackson's availability may have had something to do with that as well).
11/26/2008 3:12 PM

SCSP said...
i would like a side by side comparison of that picture of lawrence frank and the evil monkey from family guy. the resemblence in uncanny.
11/28/2008 1:27 PM