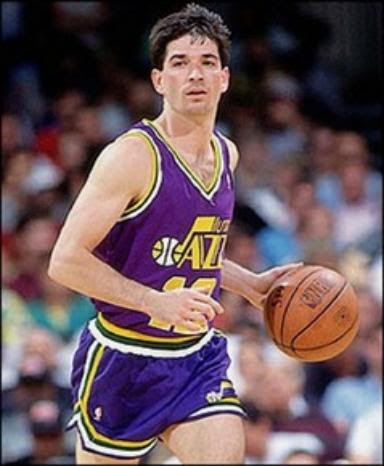 If you listen closely, you can hear his genitals screaming.
John Stockton shorts (jahn stahk'-tuhn shohrtz) noun. Refers to the leg-exposing, butt-and-junk-hugging short-shorts that were worn by NBA players from the time of George Mikan in 1946-1947 up to the early 1990s.

Usage example: Back in November of 2001, the NBA fined a scad of players -- including Shaq, Kobe Bryant, Tracy McGrady, Nick Van Exel, Eric Piatkowski and Dana Barros -- $5,000 each for wearing their shorts too long. League rules dictate that players must wear shorts that are at least one inch above the knees. For his part, Shaq said he didn't want to wear "John Stockton shorts" and was seriously worried about what the kiddies would think: "Would all the kids then wear John Stockton shorts? No, they wouldn't. They would laugh at me, and I wouldn't be their favorite player any more. I'd be the laughingstock of big men."

Word history: Michael Jordan and later Michigan University's Fab Five brought baggy shorts into vogue in the NBA, and that fashion shift caused the extinction of the short-shorts. Or, I should say, the near-extinction. Because one small, hairy man continued to sport the shorties right up until the final game of his 19-year NBA career. The fact that John Stockton was the last remaining short-short enthusiast was well known -- it's even mentioned on his Wikipedia page -- and became something of a running joke around the league and among its fans. For instance, after being fined for wearing his too-baggy shorts (as described above), Shaq squeezed his giant ass into a pair of Stockton-sized Jazz shorts and said: "Are these better, Stern?" No pictures of that event survived, and I thank God for that, but the point was made.

The short-short subject actually came up during Stockton's retirement ceremony, and this is what he had to say about it: "To be honest, for the first 15 years, I didn't know we had a say in it. I figured shorts are shorts, I've never had a say in what size the shorts were since I was a little kid. I was lucky I wasn't wearing my brother's most of the time, it's just what you have. It came to a surprise when people were making fun of me, 'I can change them?' And I didn't want to at that point, they were comfortable. Styles are going to come and go. I think it's easier to stay with what you're comfortable with."

And in case you're wondering, wearing short-shorts for 1,504 career NBA games didn't do any serious (as far as we know) or lasting damage to Stockton's genitals: He and his wife have six children. For all we know, the short-shorts might have made him more potent.

Personal anecdote: I was still in high school when baggy shorts were being phased in as the standard for NBA uniforms. Well, actually, they were pretty much phased in already. However, I had a pair of Celtics practice shorts left over from the late-80s. And, of course, they were of the short-short variety. I regularly wore these shorts when I played and practiced at the small court near my house. (Which, being in Indiana and all, was sandwiched between an elementary school and a corn field. Seriously.) To make matters worse, that also happened to be around the time when NBA players had begun wearing compression shorts under their shorts. So...I usually wore my Celtics short-shorts over a pair of bike shorts that reached almost to my knees. Yes, I know. FASHION FAIL.

Anyway, a day came along on which I was supposed to go out with this girl I'd been crushing on for years, but things were kind of up in the air. So instead of just waiting around for her to call me, I went to shoot some hoops. She called shortly after I'd left, and since this was the pre-cellular phone era, my mom had to drive out and tell me that she was waiting for me at the convention center of the local community college. There was no time to clean up or get changed, so I jumped into my car and hightailed it over there. Turns out, she wanted to attend a play. Being your typically clueless 16-year-old boy, I was utterly unaware that there was anything whatsoever unusual about showing up dressed in my short-short/bike short combination and a Larry Bird t-shirt (yes, I was decked out in full Celtics regalia). Her best friend and the best friend's boyfriend were also there -- the bf was wearing a sensible (but boring) khaki-and-polo ensemble -- and her friend kind of laughed at me and said, "Nice shorts." I didn't realize until sometime later that she wasn't being sincere.

Anonymous said...
I believe at one point in the 1990s, NBC attempted to use John Stockton as a sex symbol. They ran a commercial featuring the 3 women from Friends, in character, talking about the "short shorts guy" and how sexy it was.
10/09/2008 11:38 AM

Anonymous said...
I was always amazed that his freaking-extraordinarily-hairy legs didn't bind up in knots.

Anonymous said...
So, we he the only guy on the team with short shorts? Are there team pictures out there where he's in shorties and everyone else is in baggies? That would make me smile.
10/09/2008 1:35 PM

Anonymous said...
Yer short short stories bring back memories of elementary school. I actually went to school wearing spandex underneath all my shorts to copy NBA players (in particular Grandmama). One girl in my class laughed at me and said "Are you actually wearing spandex under your shorts?" I had to make up a lame excuse saying that I play bball everyday after school.
10/09/2008 1:44 PM

Anonymous said...
Johnny could wear tighty-whities with no shorts on at all and still average over 10apg and deliver in the clutch.

And I like the fact that he stuck to his guns- when you're as badass as him, you don't have to change your style just because other people like to wear cut-off hammer-pants.

anonymousnupe said...
I actually despise the cavernous shorts that kids play in today. How you gonna cross somebody up and go between your legs with all that excess fabric hangin' down there?! They may as well play in baggy capris!
10/09/2008 3:22 PM

Drake said...
Don't forget that Jeff Hornacek, Stockton's backcourt mate, also played in short shorts. And if they had won a title, some of us would probably be wearing short shorts to this day.
10/09/2008 3:39 PM

Anonymous said...
Back in the mid-90s when I played high school (and for a few months, college ball) baggy shorts were de riguer. I stuck with my short shorts and was soundly mocked at every opportunity. Made me the man I am today.
10/09/2008 5:54 PM

Anonymous said...
I think the WNBA should mandate those shorts.

Basketbawful said...
m.alana -- Yeah. Sadly, I thought it made me look cool and athletic.

Anonymous said...
Colour me curious, did you finally get to kiss the girl you had a crush on or not?

Anonymous said...
I remember Bulls-era Rodman seemed to have way shorter shorts than most of his teammates and opponents in the NBA, non-Stockton division.

I came of age right when players were transitioning to baggier shorts. In middle school one year in the early '90s, our basketball teams got new unis - except for my 7th grade team, which received the marble-smugglin' hand-me-downs. Just what I needed during puberty; an extra dose of lame.

The Lakers Christmas short shorts game against the Celtics would have come off better if most of the guys decided not to wear the compression shorts underneath — and if Kobe were able to sport a J.R. Reid-esque hi-top fade.
10/10/2008 9:03 AM

Anonymous said...
@anonymous: these guys over there drive at ther age of 16, but are not allowed to drink til 21...

Anonymous said...
That ain't nothing. In soccer (we call it football over here) the trend was to play in John Stockton's from the 50's until about the early 90's.

Anonymous said...
To be more clear, Anonymous - for most states the driving age in America is 16. There's actually some discussion about raising that to 18.

Basketbawful said...
supersonic -- Indeed I did. Somehow. Despite myself. Maybe someday I'll find a reason to tell the story of "Cindy the friend...or Cindy the woman."

barry -- It should be noted that many serious runners still wear short-shorts. Gak.

Anonymous said...
Has anybody ever REALLY looked at a player wearing the modern basketball "shorts"? They are ridiculous. Short shorts are no problem for a man; all he has to do is wear a brief underneath.
3/07/2009 7:02 PM

Anonymous said...
The short shorts were worn by the basketball players when I was in high school and when i go back thru yr books from the 60s 70s or 80s I think the group shots the shorter shorts look much better than todays very long baggy ones. Those are not visually nice looking and i dont know how players run around with all that fabric around the leg. Looks like easy to trip up. And what is wrong in showing leg. The thighs are nice on a man. I dont understand the criticism or the joking for it looks way better. Even the tennis shorts were like that back in the day and those looked better as well. Must more sharper. I agree with the comment about how the basketball shorts today look rediculous.
9/09/2009 9:40 AM

Anonymous said...
Well, the boy who wrote this article is typical of the self-loathing American male. He would rather want to look like a young, teenage, hoodlum than a grown man. As soon as the shorts turned into "baggy floods" I stopped watching basketball. The game also devolved into mayhem with undisciplined individuals instead of team strategy.
8/05/2010 3:07 PM