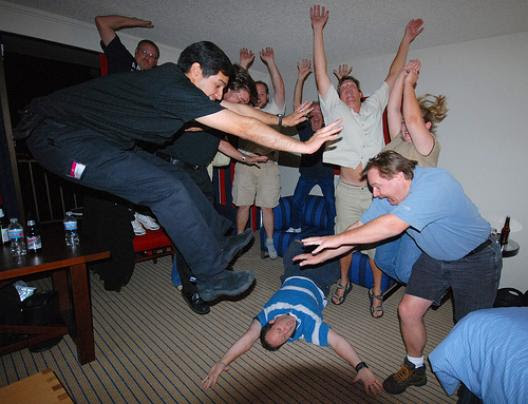 Where white men are forced to jump in captivity...
An inch! I gained an inch! I know what you're thinking, but the answer is: No. This post is not an endorsement for the Swedish-made penis enlarger pump, nor for the book "Swedish-made Penis Enlarger Pumps And Me: (This Sort Of Thing Is My Bag, Baby!)."

I am now exactly one month into the White Man Jump Challenge -- which officially concludes the Beginner Phase -- and my vertical leap has increased by a full inch. Or 2.54 centimetres. Or about 0.08333 feet. Or approximately 0.02778 yards. And sure, an inch might not sound like a big honking deal to you, but don't tell that to this guy.

The point is, it's progress, and "minor, almost imperceptible progress" is certainly better than "no progress at all." It's proof that the Strength Shoe training system can do something. I'm still not a believer; not by a long shot. I probably could have made the same modest gain by doing the same exercises without wearing paddleboards on my feet. But I wore them, and I'm now jumping higher than I did before. There's no denying that.

I actually discovered this while measuring my vertical on Wednesday night before heading to my pickup league. Silly as this may sound, I actually felt a little more confident going into the games. I mean, rationally speaking, I know that a one-inch improvement doesn't make that much of a difference, but I was jumping harder and with more determination. I was crashing the boards with greater resolve. At one point, the ball got stuck between the rim and the backboard, and I was the first to jump for it. FAIL. Instead, some 18-year-old jumping jack had to bring the ball down. No matter. Give me another month. I begin the Intermediate Phase on Saturday.

A quick note on recovery: Chris, the issuer of this challenge, e-mailed to warn me of the painful aftereffects of using the Strength Shoes. He explained that his legs were almost useless the day after his first training session, and that he briefly considered amputating them and fitting the stumps wtih bionic implants. (Okay, I made up the second half of that sentence. As far as you know.) Fortunately, I had read about the Strength Shoe hangover, and I was ready. So in addition to the proscribed stretches, my post-Strength Shoe workout recovery period also includes icing my calves, 15-20 minutes in a Whirlpool tub, and 10-20 minutes of vigorous therapy from an electric handheld massager. I skipped recovery once and my legs felt like they were trying to contract to 1/5th their normal size the next morning. I didn't skip again.

Videotastic extra: Did you know that the Strength Shoes were featured on an episode of Seinfeld? Well, now you do.

KNEE JERK NBA said...
Charles Barkley cultivated his leaping skills by repeatedly jumping back and forth over a 4-foot chain-link fence. Maybe if your shoes don't work out...
10/03/2008 11:47 AM

Anonymous said...
First off, WTF are the guys doing in that picture? Secondly, not to burst your bubble, you probably could of gained an inch or so easily just by jumping around without the shoes. Granted, I don't know your game firsthand but if at 6 ft something and you can't even knock down a ball trapped between the backboard and rim then I am going to assume jumping isn't a big part of it. I play basketball outdoors during the summer at a court whose rim are only about 9.5 ft from the ground, which is dunkable for me (and I'm only 5'8 and white, not to brag......well yes, to brag). Now, early in the spring when I go out to play I can barely put the ball above the rim, but once summer comes in full swing I can dunk with regularity. It's just my leg muscles getting re-acquainted with the action of jumping. So what I am saying is, yes, you gained an inch (and by the end of it maybe even a couple more) because you are strengthening those muscles/tendons involved but that's just because you are probably just now starting to really engage those muscles where as before you kept yourself mostly to the ground.
10/03/2008 12:07 PM

spiegel said...
Hey...Bawful? Not sure how to address you because I don't believe I know your actual name. Anyways, I've been reading your posts for a long time, and they are really great. Ok enough flattery...I read the Vertical Jump Bible that you talked about in your platform shoes post...and it had a very interesting passage you might be interested in. This is on page 126 during a question/answer section. Just thought you should know... I recently started workouts using the VJB as a guide, and I too hope to dunk before the end of the year...and I'm 5'9"!! Only 6 more inches to go...Good luck with your workouts.

"What about platform shoes?

But what about strength shoes you might ask?? In reality I'll admit that people DO
increase their vertical jumps using platform shoes. However, the improvement is because
of the drills and exercises they do not by the magic of the shoes. In scientific studies,
folks using the exact same training program without the shoes gain just as well if not
better. In fact check out this study. It was a study involving 2 groups, one group did
exercises in normal shoes. The other group did exercises in special platform (Strength)
shoes. The workout was provided by the manufacturer. It randomized 12 intercollegiate
track and field participants to a Strength-Shoe group and a normal-shoe group. After 8
weeks of a training program supplied by the manufacturer, the normal-shoe group
showed a tendency to improve more than the Strength-Shoe group on all
performance measures!
The individuals training in regular shoes improved more in the 40-yard dash (8.3% vs
6.9%), vertical jump (9.2% vs 3.3%), strength at slow speed (16% vs 10%), and strength
at fast speed (13% vs -5%). Only calf circumference tended to improve slightly more in
the Strength-Shoe group (2.3% vs 0.2% in the normal group). Two of the six athletes in
the Strength-Shoe group complained of shin splints, and one of them had to drop out of
the study because of the pain. None of the normal-shoe group complained of pain or
dropped out. The study actually showed people training in normal shoes with the same
training program gained more then those training with the special shoes!
In their promotional literature, Strength Footwear Inc. claim that up to 0.2 seconds can be
taken off the 40-yard time (about 4%), nine inches can be added to the vertical jump
(about 40%), and calf girth can be increased by two inches (about 15%). These claims
were clearly not supported in this study. In fact, any slight gain that might be possible
with Strength Shoes would appear to be more than offset by the higher risk of injury.
If you're dead set that you want to use platform shoes anyway you can do so. In fact, you
can use the shoes for every plyometric exercise and non-weight room drill in this
program. For best results you should only wear the shoes on ½ of the sets that you do.
For example, lets say a program calls for you to perform 4 sets of a certain exercise. For
best results you'd wear the shoes for 2 sets, and then take them off and wear regular
shoes for 2 sets. By training like this you'll find you get an enhanced effect on all the
exercises."
10/03/2008 12:32 PM

That's what she said.

Basketbawful said...
kneejerknba -- If I could hop over four-foot fences, I wouldn't need vertical jump training.

al james -- Yeah, I actually said in the post that the gain probably could have been achieved by performing the same exercises sans the Strength Shoes. But I'm testing the shoes, and these are my results.

charles -- Yes, I read that passage too...after I started the challenge, which is specific to the Strength Shoes. I committed to doing it, and I'm going to see it through. It's basically a three-month program, from Beginner through Advanced. I assume I'll see marginal gains and then, after that, I'll start on the program I've selected from the VJB. Feel free to check in and let me know how it's working for you.

Anonymous said...
Holy crap, what a bunch of nay-saying doubters! This has been going on all of what, 2-3 weeks? I'll start to worry after 2 months if you don't show any significant improvement. Stay the course, bawful.

It's real easy to doubt something, but doubt does not qualify as proof that something is wrong, contrary to popular belief.

Also, little obvious truth here, running and jumping are both easier when you have less body fat. I don't know what you're doing to control your weight if anything (you mentioned taco bell in a post the other day...) but that is another variable in the experiment that should be taken into consideration.

Have you weighed yourself on the days you test your jumping?

Without all three, you're not really giving yourself a chance.

koberulz said...
"Keep it up- I want to see monster dunkage! At this rate you will have another foot in vertical leap in 6 months- think about that!"

Who taught you to do math?

"
It's real easy to doubt something, but doubt does not qualify as proof that something is wrong, contrary to popular belief."

Sorry if I don't consider a commenter on a basketball blog who grabbed a random internet article to use as "proof" to be a scientific study. I guess the same person who taught me math taught me not to believe everything I read- especially on the internet.

I actually consider what Matt is doing to be a scientific study, and as such should be carried out no matter what other people's research says.

And if 2 weeks equals one inch, then 6 months equals a foot. That's my advanced mathmatologyism, give or take. I see no need to knitpick on this issue further.

The point of my comment was that just because you don't see instant results, you shouldn't abandon ship, regardless of what texts grabbed off the internet say. The human body is capable of more than we let ourselves believe.

koberulz said...
It's not a random article off the internet, it's a passage from a book. There's a huge difference.

That, and from the blog: "I am now exactly one month into the White Man Jump Challenge -- which officially concludes the Beginner Phase -- and my vertical leap has increased by a full inch."

D.J. Foster said...
Where are all these 5'8 white guys who dunk? Do they really exist? I've played basketball my entire life, high school, rec leagues, pickup ball and I have NEVER seen a 5'8 white guy jimmy jam.

Anonymous said...
that second poster, bragging about dunking on a lowered rim, made my day. Congrats dude! maybe next you can score with a really hot transvestite.
10/04/2008 8:36 PM

ChrisH said...
1 inch is better than none. STill, I'm glad to hear you're forging on because I doubt 1 inch will generate much hype for those shoes when I auction them off on ebay. (autographed of course)
10/04/2008 8:48 PM