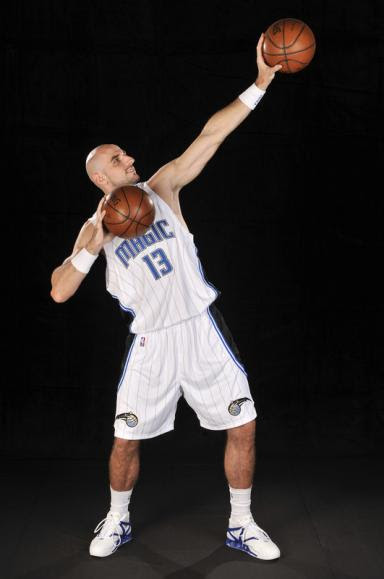 My epic NBA season preview spectacular on Deadspin is still silently stalking the upcoming basketball season the way Jason Voorhees hunts down large-breasted camp counselors. Only my previews offer a sightly better surival rate. But don't run up the stairs or hide in the basement! Your very life -- and my page view bonus -- may very well depend on it.

Also, in continuing coordinated conjunction with CelticsBlog, here are the previews for the Southeast Division. And hey, it looks like I wasn't the only sucker brave soul willing to preview the Hawks...

Anonymous said...
First Aborigine player in the league, it's gonna be Dreamtime at the ACC baby, oh yeah!

Seriously now, Andrea had a bad Sophmore season, but he's very skilled and has high BBIQ. He's also been playing very well in the pre-season. I expect great things from that young man.

"West admitted to being on edge, mostly because he was unsure of his status with a new general manager and front office staff arriving after his rookie season.

“Mario West is just a guy that has a lot of heart,” Woodson said. “He makes things happen, and he changes the game when he’s out there on the floor. I’m sure Mario had an ulcer worrying about it [making the team]. But again, I think Mario knows what we’re about. He knows how I like guys that play hard."