...who would stalk Luke Walton? Well, here's the answer (via Deadspin):

Bloargh!
Her name: Stacy Elizabeth Beshear, 34, of El Segundo, California. Her game: Stalking the hell out of the Son of Walton. For a year. According to Sgt. Steve Tobias of the Manhattan Beach Police Department: "She had been following him to his practice site and following him home and repeatedly asking him to sign basketballs after he'd already done so. At one point, she got upset and was taking a Sharpie pen to his vehicle after he refused to sign a soccer ball."

It didn't end with those fun and games, though. On September 15, Beshear "crossed the line" by following Walton to the house of Lakers teammate Jordan Farmar and pulling up next to him. Said Tobias: "She was following him for a large part of the day and at one point drove side by side with him and gestured at him, extended her hand out the window and acted like she was cocking a gun."

As you can imagine, this behavior freaked Walton the hell out: "It's bananas. I'll be going to sleep at night and just randomly look out the window. Just to check. Just because. She has been out there at 12:30, 1:30 in the morning. She would park outside my house for hours and hours. I would drive out, and I would see her peeking through. It would suck, because I know I'm leaving my home, and I know she's still there. What am I supposed to do? Is she planning on breaking in? Am I going to come home one day and she's sleeping in my bed? Is she going to steal my dog? You try not to think about it. But every time I see a black Honda now, I'm like, 'Is that her?' I'll slow down and look. It's like every day. There are a billion of these cars. Since I've noticed her, I've noticed these cars are everywhere. It's like I'm going paranoid like some movie character."

The source of the woman's insanity? Why, the trammels of unrequited love, of course. According to Walton, this is what crazy stalker lady said during her fake gun attack: "She told me that we belong together. And then she started flipping out about all sorts of stuff. She said she wanted to move to San Diego, but people wouldn't let her. I was like, 'What people?' She's like, 'The people! The people in the universe! They won't let me move, because they say you and I are supposed to be together.' I was like, 'Oh, wow. She's crazy.'"

Maybe that'll teach Luke the dangers of having such beautiful, glistening hair and powerful, rippling muscles. Sorry, where was I? Oh, yeah. Click here for even more of the whacky details.

Update! If Stacy is as batshit insane as I think she is -- and let's face it, she might go to jail for stalking Luke Walton, and that's pretty damn crazy -- what's she going to do when she finds out about Luke's threeway tryst with Karl Malone and Horace Grant? I'm not saying that she's going kill them and make clothes out of their skin, but if Grant or the Mailman find a bunny boiling on their stove someday, the police might want to give Stacy a ring. (Thanks to eljpeman for the reminder.) 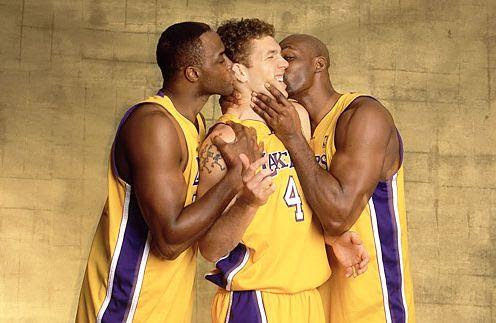 m. Alana said...
It doesn't matter what she looks like if she's fucking crazy. That's always been my motto, anyway, and it's kept me out of trouble so far...

Anonymous said...
This should lead to an All-Star event, like Stalkers x Cheerleaders in a NO HOLDS BARRED match.

The players would have to spend the night with the winners.

Anonymous said...
I hope this gets mentioned at some point during the season, preferably during a TNT halftime show.

I want to hear what Chuck has to say about this.

Basketbawful said...
m.alana and dandruff102 -- That picture was one of the first graphics I ever ran on Basketbawful, three years or so ago. I believe I found it while doing a Google image search for "Karl Malone Lakers." It definitely was a precursor to the site's many man love posts.

Anonymous said...
Bawful, if you can bring yourself to do it, post a side-by-side of Blargh and Bird.