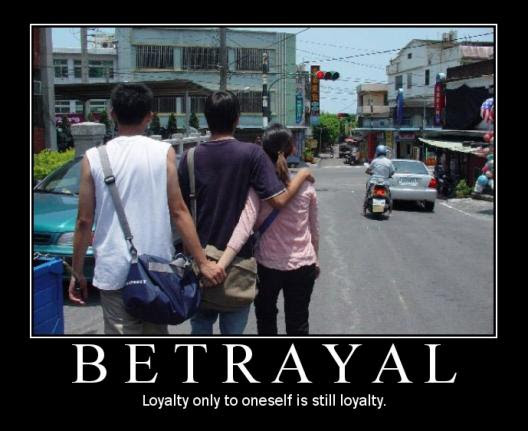 Usage example: My buddy Greg called me for traveling on game point last night, and he's was on MY team. What a Pickup Judas.

Word history: I coined this term -- which, obviously, is a reference to the Biblical Judas -- a few years ago during a game in which one of my teammates kept calling bogus traveling violations against me. I was reminded of the term by Basketbawful reader Yaroslav, who suggested a variation of it: "teamtrayal." I like Pickup Judas better, but teamtrayal can work as a synonym. Yaroslav also provided the following spot-on example of a Pickup Judas scenario:

This illustrates why the behavior of a Pickup Judas can be so disastrous: It's automatically assumed by almost everyone present that the call must be legitimate, because why else would your own teammate side against you? The assumption, therefore, is that the Pickup Judas' actions are always altruistic. And sometimes they are. I mean, let's face it, we all try to get away with what we can from time to time. But there are some instances when the Pickup Judas will stab you in the back for dark reasons known only to himself. Maybe he wants to get in good with the guys on the other team, maybe he wants your team to lose so he can shoot up onto a new team, or maybe he just doesn't like you. Whatever the case, don't bother to change your game to avoid his traveshamockery. He'll keep doing it anyway.

Anonymous said...
damn those pickup judasses (judos?)! and you are right, 90% of those judas-outings come over (supposed) traveling calls, wich are, btw, among the most odd calls in a pickup game.
right behind 3second violation and ahed of "your foot touched the line!"
9/29/2008 12:13 PM

Anonymous said...
I used to play pickup with someone who reffed high school games and thought it was their job to keep everyone on both teams honest (too bad they were a terrible ref). I had no idea this was a phenomenon.
9/29/2008 12:26 PM

Anonymous said...
Well Bawful, I don't agree on one thing: having a pickup Judas on your team may be good sometimes.

Wondering how and why?

Pickup Judas could play the "intelligence" role in your league: you see, they are always calling against their own teams, so all their calls must be honest and true, right?

There is nothing better than a bogus call from a pickup Judas against the opposite team in the final plays of a very close game: there is no better way to persuade angry players than that! It works, believe me.
9/29/2008 1:16 PM

Unknown said...
I agree about the traveling call. I think you should do a post on traveling. The actual rule, and how it is abused and molested on playgrounds to the nba. You can just use a lebron highlight reel as your guide. Ok that was a bit much, but that dude does have some doozie travels that still make a highlight reel.

This is one of the most contested calls in the pickup in my area, so i just want a corroberative reference. With video please!
9/29/2008 1:25 PM

Unknown said...
After all these years I find out that it isn't just me who experienced this. Indeed it's mostly on travel calls.
Come to think of it, I may have been guilty of doing this myself. So I can comment on the reason behind it : trying to be a smart-ass.
As simple as that really.
9/29/2008 3:01 PM

Drake said...
showtime - if NBA refs aren't that great at their jobs, and NCAA and FIBA refs are even worse, then you can obviously see how good a former high school ref is gonna be.

Stupid arguments over rules everyone thinks they know can't be avoided; it's part of the game. And I emphasize the term "think they know" because people simply don't take the time to actually study the rules. So doing a little research on them might help your cause.

And I've been a Pickup Judas on calls made on myself sometimes because I'm simply too honest in that regard. That said, if something happens that I know I'm right about, I will definitely argue it.

The one situation that comes to mind is during one pickup game: when I went to corral a rebound with my right hand, the guy behind me also went for it a slapped it out of bounds. It's common courtesy to silently acknowledge that it's a foul or force out, so it's our ball, right? Nope. Some douchebag on the other team says it's their ball because I touched it last. I make the argument above, and then when he refuses to acknowledge that rule, I say it's a foul instead. Unbelievably, he refused to accept the foul also. Can you believe some people?
9/29/2008 4:11 PM

Anonymous said...
Nah I disagree with this one. I think teammates sign with the opponent to avoid pointless arguing. I know I've done it just to save time
9/29/2008 5:50 PM

Anonymous said...
The picture chosen for this article owns...

And sadly I have nothing else to contribute. Women's rec center pickup games pretty much NEVER feature fouls, called by anyone... despite the fact that most girls seem to think kung fu chopping your wrist and falling on the ball is an acceptable "steal".

a pickup judas is alright if he's teammates with a 'hacker.' I think he actually cancels him out because it's someone on that team that can possibly keep crazy hackers in check.

Anonymous said...
For those of you who are talking about refereeing, check this truehoop-article out: http://myespn.go.com/blogs/truehoop/0-34-107/Notes-from-a-Day-with-NBA-Referees.html
9/30/2008 5:36 AM

Anonymous said...
oh my. I just realized the last pickupjudas I met was ME...i didn't mean to pick on my teammate, i just thought we would get away with other calls later in the game. you just sometimes feel you might as well trade off between giving up a meaningless travel and winning on a later controversial call. game theory, man.
9/30/2008 5:59 AM

Just this past weekend i played pickup ball with my some buddies. i played against a friend of mine who ive teamed up with on many organized leagues over the years.

this certain player is a legit rec-league inside-outside threat. a big guy with low post moves with a three point shot. (think a combination of 1992 & 1995 Larry Johnson) too bad he has the basketball IQ of a jelly donut.

anyways, he was teamed with a below par pg who kept feeding him the ball inside. almost every time our team collapsed and we either stole the ball or he forced a wild shot.

when the score was getting too ugly even for my standards i screamed at the guy and reminded the idiot that he still has an outside jumper in his repertoire if he cant get his way inside.

next game, guess who lit it up from the outside? you guessed it. i don't think the big guy even stepped foot in the paint. my team mates were all over me for "coaching" the opponent.

thank goodness we won that game too (albeit by a small margin) or my teammates would probably never invite me again.
9/30/2008 7:47 AM

The "pickup judas" typically is playing with some asshole who is ruining the game with all of his antics.

The people I play with aren't trying to get away with anything anyway.

If I think a teammate committed a violation, and the other team calls it, I'll let him know that I think he did also.

Anonymous said...
kazam92, you hit it on the head for me. I hate wasting time with the arguing, so I'll "give" the team a call just to keep us playing.

And yes, that karma can come back to help you later.

On the flipside though, I hate those guys who are "tough" and never call fouls all game. they just play and let it go. THEN when the game is on the line, all of the sudden every tick tack foul against them is called immediately. Even some imaginary ones get added in at crunch time.
9/30/2008 9:13 AM

m. Alana said...
So, in essence, Farfa and others here are remaining true to the spirit of the original Judas - appearing to betray a friend while actually working towards their interest, and getting the blame for it. This is all very metaphysical. (Which is not the word, but whatever, I'm busy talking out my ass here.)

I agree with PG4L on the girls in pickup ball thing - unless you're playing with a total AND-1!!! asshole, hardly anybody calls a foul on a girl. Even if they deserve it. My theory is that it's cosmic balance for nobody wanting to play with girls in the first place.
9/30/2008 11:38 AM

What would you call it when you make a call on yourself because it was just too blatant to let it slide? I've double dribbled before and just stopped mid-play because it was just too atrocious and I couldn't live with myself. Would that be "Pickup Jesus" because you feel like Jim Carey in Liar Liar?
9/30/2008 12:25 PM
Post a Comment
<< Home
Subscribe
RSS Feed
Mailing List