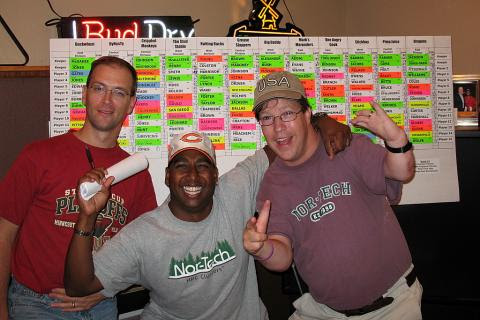 drafterglow (draf'-tuhr-glo') noun. In fantasy sports, the fleeting (and usually false) rush of euphoria a team owner experiences immediately after completing what he/she assumes was an overwhelmingly successful draft.

Usage example: In 2005, I had a serious case of drafterglow after nabbing Amare Stoudemire in the first round. Yeah, that worked out really well.

Word trivia: Here's a rule of thumb regarding fantasy sports: Almost every team looks like a potential juggernaut before the season actually starts. Every year, I get caught in the warm, fluffy grip of drafterglow while reviewing the Dream Team I just selected. But that fuzzy feeling more often than not turns to sheer terror (and, eventually, berzerker rage) due to unexpected injuries and unforseen decline. Who knew that Amare would blow the hell out his knee, or that Shaun Alexander would crumple into a pathetic heap the season after he was named the NFL's MVP? Or that Jason Kidd would age exponentially, or that Marc Bulger would have his head torn off last year, or that...

That's when drafterglow becomes post-draft regret. And once you've been vicitimized by this phenomenon often enough, one of two things happen: You become a fantasy cynic or develop fantasy paranoia. A fantasy cynic is someone who always (and loudly) expects the worst until they finally win the league championship, and even then they might still be wary that something will go wrong. ("I bet there'll be some sort of point adjustment that'll rob me of the title.") Fantasy paranoia is a condition in which the owner becomes increasingly suspicious and deluded, and it's characterized by bizarre, lopsided trade requests ("I'll give you Mo Williams for Kobe Bryant.") and constant (but laughable) waiver wire pickups ("I'm telling you, with KG out Brian Scalabrine is going to put up big numbers!"). The owner suffering fantasy paranoia will also have a compulsive, even neurotic, need to repeatedly check on his team and adjust lineups during the day. Note that there is no known cure for this condition.


(Evil Ted Contribution Update: "I am officially in full onset fantasy football pananoia. Sure, I got Tom Brady with the fifth pick, but now I have to listen to the twerps around the office mock my Tom Brady fandom, and gloat over the rumor that he has a broken foot. Hopefully a nice 6-touchdown day against the lowly Chiefs will take care of things," he says while sipping from his plastic Tom Brady hologram cup.)

Justin Tenuto said...
As the founding father of the "Gilbert Arenas Fustigated My Fantasy Team" support group, I've been feeling this pain for quite some time.

Also, in a complete fit of ignorance, I selected a guy named Kevin Curtis in the 5th round of my football draft. His testicles are in his nutsack. Seriously. He's out with a hernia. And then I was laughed at.
9/05/2008 7:52 PM

Anonymous said...
I could have had the Boston Big Three last year, but I opted to choose Ray over PP. Whoops.

My friend last year had Shaq, Dwyane Wade, Marion, Elton Brand (13th pick), and some other injured guys. There was a time when he could only field 4 people.

Speaking of fantasy basketball. Is BBawful going to set up a fantasy league? Because I think that would be really swell and count me in.
9/06/2008 6:45 PM

Syrus said...
I too suffer from Fantasy paranoia. When the rank 2 in my league traded Iverson for Marion I started making a shitload of lopsided trade requests. Landed Ron Artest for Wally. And then Ron decided to take every other day off and I ended up losing in the finals round..
9/06/2008 9:13 PM

Anonymous said...
Well one thing I have in common with Lakers fans is that I think I would have been able to win my fantasy finals if Bynum was still healthy (...and Kaman and Marion)
9/06/2008 11:40 PM

Stu Holdren said...
Wow - this is brilliant. I think that the draft is always the most fun of the whole fantasy league, and EVERYONE always thinks they came out on top after the draft. This year, I'm doing an offline draft so I can criticize peoples picks to their face for added impact :)
9/06/2008 11:56 PM

I won my fantasy league (for the first time EVER!) last season, thanks mainly to Chris Kaman, John Salmons (for the first quarter of the season he was my main combo-guard because Arenas was out and he was putting up 20-5-5), Hedo Turkoglu and Josh Smith.

I acquired Smith for Rashard Lewis and when the other guy accepted the trade he sent me a message saying, "Thanks! That's the dumbest trade request I've ever seen." It sure was. I thought I would have to give up Melo to get Smith, but herein lies the wisdom in lowballing the other guy.
9/07/2008 1:16 AM

Anonymous said...
I second Sun Devil, I too would like to test my Fantasy BBall might against the likes of Bawful and Evil Ted!

Oh, and Ted. I'm sorry about Tom Brady, but that was Tom's fault: he didn't read the fine print on the contract Satan made with him last year for the 18-and-No record which didn't guarantee the Super Bowl win, but still had to pay the price this year.

then I traded Barber for Randy Moss thinking the magic of last year can happen again. Yay for season ending injuries!