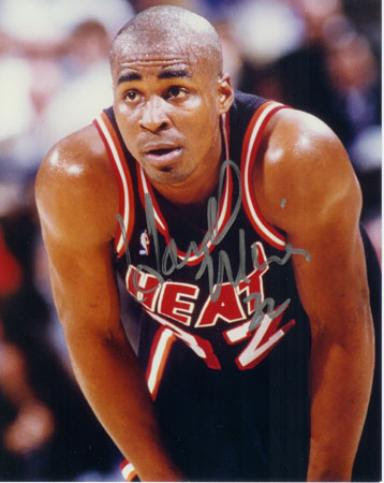 By my count, there have been no fewer than eight Next Michael Jordans: Grant Hill, Harold Miner, Jerry Stackhouse, Kobe Bryant, LeBron James, Penny Hardaway, Tracy McGrady and Vince Carter.

There are a few things you might have noticed while scanning over this list. First, none of those players have even matched let alone surpassed Jordan. Kobe and LeBron have come the closest so far...but they're both still quite a ways off. Second, by and large, the Next Jordans have nonetheless achieved a fair level of professional success: MVPs (well, one anyway), championships, scoring titles, All-Star appearances, All-NBA recognition. However, third and finally, one of these things is not like the others. One of these things just doesn't belong.

He was the first and worst of the Next Jordans. A high school phenom whose mind-bending leaping ability and freaktastic dunksplosions earned him the nickname "Baby Jordan," Miner played three above-average seasons at USC (23.5 PPG, 5.4 RPG, 45 percent shooting) before bolting for the pros. He was selected 12th overall in the 1992 NBA Draft by a Miami Heat squad that already included Glen Rice, Rony Seikaly, and Steve Smith, as well as other serviceable players like Grant Long, Kevin Edwards, Bimbo Coles and Brian Shaw. Adding Miner was supposed to help transform Miami into one of the league's elite teams.

It didn't quite work out that way, though. He played three lackluster seasons for the Heat in which he never played more than 21 minutes per game and never averaged more than 10.5 points. He was a two-time Slam Dunk Champion (in 1993 and 1995), but those titles only served to underscore Miner's basic weakness as a player: He was merely a fantastic dunker, nothing more and nothing less. He couldn't rebound, pass or play NBA defense. His supposed forte, offense, was suspect because of his poor outside shooting.

The Heat gave on Miner after the 1995 season and traded him to the Cleveland Cavaliers, where he averaged 3.2 points and 7.2 minutes in 19 games. His final NBA game came on February 20, 1996. His line: Zero points (0-for-2), 2 assists, and 1 foul in five minutes of lack-tion. After that game, Miner was waived. He tried to make it onto the Toronto Raptors in the fall of 1996, but he was cut during the preseason. He then "retired."

Nobody really knows what happened to Miner after that. (At least nobody who's willing to talk about it.) There have been rumors, of course. Plenty of rumors. Some say he's in witness-protection. Others claime he's hooping it up in Japan. He might also be living with his mom in L.A., running an insurance company in Florida, building homes in South Dakota, hooked on crack, writing for an online blogging competition, or dead. Miner's Wikipedia page states that he "eventually settled near Las Vegas, Nevada and is reportedly an active real estate investor." But it's Wikipedia...so who knows.

George Raveling, Miner's head coach at USC, once said: "I always felt the worst thing to happen to Harold was the 'Baby Jordan' tag." And that's probably true. I'm not saying that the "Next Jordan Curse" ruined Miner, blew out Penny Hardaway's knee, destroyed Grant Hill's ankle, made Tracy McGrady psychologically incapable of making it out of the first round, caused Kobe to develop bipolar affective disorder, or turned Jerry Stackhouse into a flaming asshole...but it sure as heck didn't help.

Note: Basketbawful reader Loren asked "How about Len Bias?" Good question. There were indeed comparisons made between the two men while Bias was still in college, but I don't consider Bias a true member of the Next Jordan Club. This is because, at the time Bias was drafted by the Celtics, Michael Jordan was not yet Michael Jordan. Jordan had been in the NBA for only two seasons and, due to a broken foot suffered during the 1985-86 campaign, he had played in only 100 career games. Moreoever, he had played in only three playoff games to that point, losing all of them. Yes, he had that 63-point game, but one historic scoring explosion does not a Legend make.

The Jordan Legend wasn't truly solidified until he won that first title in 1991 (although it certaily wasn't complete by that time, either). That puts Miner on the outer fringe of the Next Jordan Spectrum. Bias falls outside of it. However, if he was included in the Nex Jordans group, he would have qualified as the worst ever...since his irresponsible use of cocaine resulted in his death before he could play a single game.

Anonymous said...
When I was a kid, I thought that my stack of Harold Miner Skybox rookie cards (along with my fave Todd Van Poppel on the baseball side) would eventually allow me to never have to work for a living. Needless to say, I'm still a good 30 years from retirement at this point.
8/15/2008 10:21 AM

What are you talking about?

#1 Len bais never got a chance to show what he was going to do.

Cortez said...
"He was sitting on the sideline and we just got into a little conversation or something and he was going to tell me, you know, 'Talk to me when you get a ring.' I was like, I told that fool, 'If I played with Magic and Worthy and Kareem I'd have a ring, too. So, you know, he's a sucker in my book, but that's a whole other story."

I couldn't care less if Scoot was a starter on three championship teams. Like that nitwit was the first, second, or third, or fou(...oh, you get it) option.

If you were fortunate enough to be part of something great, don't act like you were the focal point. They could have put any serviceable bum in his place a still won.

Anonymous said...
Has there ever been "The Next [Insert name here]" who has lived up to his billing?

Seriously- nobody is truly the next somebody else. And I love how a white/black player is never the "next" player of a different race.

Anonymous said...
What about ballers´ sons? Jordan, Ewing, Stockton, Walton, Berry - among others - have their sons playing bball.

Victor said...
"He was merely a fantastic dunker, nothing more and nothing less. He couldn't rebound, pass or play NBA defense. His supposed forte, offense, was suspect because of his poor outside shooting."

Five Pound Bag said...
didn't JR Rider get some "next Jordan" hype? Or have we agreed to forget everything about him except the East Bay Funk Dunk?

Basketbawful said...
cortez -- That's just one example. Stackhouse is notorious for picking fights and trying to intimidate people. I just don't like him.

brandon -- In my research, I read on rumor that said somewhere on the Web there are pictures of Miner's mansion. If that rumor is true, and who can know, then he did indeed invest wisely. Hey, if I had $5 mil I probably wouldn't care if everyone thought I was a flop.

ak dave -- WOW. My funny bone was in no way ready for the Nowitzki/Perkins comparison. It literally just blew up.

victor -- OMG! If Green gets any PT this season, I'm going to call him that. If I forget you were the one who suggested it, remind me.

gmoney -- Sadly, there were some mentions of that...gak...

five pound bag -- Dude, if it weren't for the East Bay Funk Dunk, my mind would not have allowed me to even register you mentioning what's-his-name. How could such a douche do something so cool and nearly un-emulateable?
8/15/2008 1:53 PM

But... wait another 5 years when Dirk becomes completely immobile and essentially a 7-foot-tall 3-point specialist. Then he really WILL BE Sam Perkins!
8/15/2008 4:40 PM

Unknown said...
Wow, everyone is forgetting about Wade. I am glad he is doing so well in the olympics but he got the next Jordan stuff pinned on him. How can everyone just forget about wade, two injury filled seasons and he gets written off. Wow is he back, and he might just live up to it, don't tell me that none of you have noticed how he is the best player on that team... umm... except for maybe Bron, Bron is such a freak of nature. Total freak show of talent.
8/16/2008 1:21 AM

I think Toni Kukoc was supposed to be the next Magic. Or White Magic or Euro Magic or something like that. So that's atleast one instance of there being interracial "next so-and-so" comparison.

What about the Barry Clan? Jon and Brent have together had quite a career.

Which brings me to another interracial comparison. How about JR Smith or Jason Richardson as the next Brent Barry? ie Slam Dunk champion who then spends the rest of career jacking up 3s.
8/16/2008 4:20 AM

Anonymous said...
How about Felipe Lopez? You didn't mention him... He was pretty freakin' sensational back in the 90's, as a highschool freshman, almost as hyped as LeBron was... Definitely tabed as The Next Jordan, if my memory serves.
8/17/2008 8:23 AM

Anonymous said...
I think this post has proven that the league needs to "get over" michael jordan. Fo the benefit of the fans, the league and mostly the players.

I have seen some college footage where a commentator had called bias "the next jordan". But you are right jordan wasnt "jordan" yet and that makes this even worse.
8/17/2008 3:39 PM

ChrisH said...
"irresponsible use of cocaine"