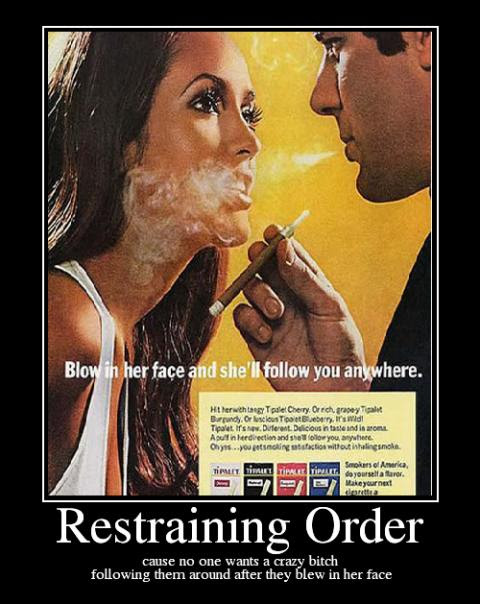 Shaq's been served! With a (temporary) restraining order, that is. The crime? Terror, dear readers. Terror.

Alexis Miller -- a 23-year-old hippity-hop artist known as MaryJANE -- was granted a large stack of anti-Shaq paperwork based on her allegations that the Big Creepy "stalked her, threatened her with bodily harm and made harassing phone calls in which he breathed heavily into the phone before hanging up." (To be fair, the heavy-breathing may or may not have been intended as a threat. It's possible Shaq was on his cell phone and had just finished doing something very strenuous, like trudging up a flight of stairs or maybe walking ten feet.)

Miller, who's supposedly known Shaq for about a year and a half, has allegedly been "intimate" with him for the last six to eight months. (Quick question: What does she mean by "six to eight months"? That's, like, a two-month margin of error. Now, I've never had sex with Shaq, but it seems to me that being penetrated by his giant, terrifying dong is something that wouldn't easily fade from one's memory. I'm just sayin'.) Miller claims she ended their relationship last month, and that Shaq then threatened to pay performers $50,000 each not to work with her...even though many of them had already been doing it for free.

Miller's attorney, L. David Wolfe (isn't that a pefect lawyer name?), said: "It's been very difficult for her. Her fears are not only for herself, but also the people around her." (Apparently, he feels Shaq could be capable of brutal, multiple-victim rampage. And, now that I think about it, he's probably right.) Wolfe added that Miller is "pretty traumatized." Not just traumatized, mind you. She's pretty traumatized. (In legal terms, "pretty" is like a money multiplier when determining the eventual payout.)

Now here's the moneyshot: The court affadavit quotes an e-mail from Shaq in which the Big Shakespeare said: "I dnt no who the fuk u think u dealin wit u will neva be heard from one phone call is I gotta make now try me. Sho me."

No way was Miller going to put up with that. After all, her MySpace page clearly and emphatically states "No Bitchassness."

The restraining order prohibits Shaq from having any contact or even coming within 200 yards of Miller or her 19-month-old son. (Because Shaq is a notorious child murderer.) Miller and Shaq must appear before Fulton County Superior Court Judge Karen Woodson on September 4 to determine whether the restraining order should be changed from "temporary" to "longer than temporary." Call me crazy, but my Spider-sense is predicting an out-of-court settlement on or before that date.

[Thanks to Basketbawful reader Michael for the head's up.]

BJ said...
"Now, I've never had sex with Shaq, but it seems to me that being penetrated by his giant, terrifying dong is something that wouldn't easily fade from one's memory."

Cortez said...
"It's possible Shaq was on his cell phone and had just finished doing something very strenuous, like trudging up a flight of stairs or maybe walking ten feet.)"

Wang McMuffin said...
Now, I've never had sex with Shaq, but it seems to me that being penetrated by his giant, terrifying dong is something that wouldn't easily fade from one's memory.

As bj said, that could definitely be repressed, that would be a pretty traumatic experience.

Maybe he simply hit her with it when he was done. The concussion she'd get from that monstrosity made her forget what happened and left her wondering why she couldn't walk for a few days.
Or weeks.
Or months.
8/23/2008 4:33 PM

Anonymous said...
Fabricio Oberto's full name is Fabricio Raul Jesus Oberto. And he sorta looks like Jesus. Could it be that Oberto is the Jesus of basketball? I think so....
8/24/2008 12:33 AM

Anonymous said...
Ray Allen is the Jesus of basketball.

Trev said...
Anonymous and Batman: Everyone knows that Larry Bird is Basketball Jesus, you are both going to burn in the fires of hell for this blasphemy.

You do know about hell right? Where they make you watch Kwame Brown play one on one with Chris Washburn with Reggie Miller doing play by play for all eternity.
8/25/2008 9:21 AM

stephanie g said...
Is it a known fact that Shaq has a baby arm in his pants? Because I was going to say that just because someone has a big body doesn't mean his nether regions scale up proportionally.
8/26/2008 10:07 PM
Post a Comment
<< Home
Subscribe
RSS Feed
Mailing List