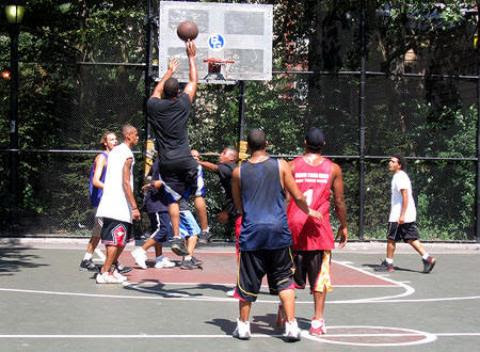 Bawful and I returned to my hacker league for another round of poorly played basketball as we wait for our regular season league to open back up. Several occurrences that evening prompted some new Basketbawful terminology.

Fake Cramp: Bawful and I started on the same team and won the first couple of games. While we were playing, an eleventh, twelvth and thirteenth dude showed up, so rather than play with subs, Bawful and I eventually found ourselves shooting freethrows to keep playing. He missed and I hit, so I ended up playing on a new team.

[Note from Basketbawful: I had already lined up for the freethrow when ET said he didn't want to play on that team. So, instead of just walking away and insulting somebody, I shot the 'throw flatfooted...missing on purpose. I figured ET would follow suit. He didn't.]


[Note from Evil Ted: I remember this a little differently. Bawful and I were at the freethrow line when I thought out loud about just sitting out a game. I'm not sure why Bawful is concerned about insulting these schmucks. Has any baller ever complained when people voluntarily sit out when there are too many guys? Anyway, Bawful's brick did look intentional, but I didn't do what I should have done - ask "Brick it?" I figured that since Bawful passed on sitting a game, he was trying to make the shot. Lack of communication is common in many marriages, and has resulted in more than a few altercations with Bawful...and my wife...and my kids...and my pastor. Still, since Bawful missed, when I went up to the line I felt zero pressure to hit, resulting in a swish (had I wanted to make it, I'd have blown it).]

About a third of the way through the game, I'm not really enjoying my team, and I'm seeing Bawful and another player I enjoy playing with on the sidelines. With the way we rotate teams (play two games, sit one, win or lose) I'm going to be playing against them next...unless I come up with a brilliantly lame "fake cramp."

The thirteeth dude is on the other end of the bleachers. I don't know him, and don't really like playing with him. "You have a white shirt?" I call to him. (We play whites and darks). He nods. "Get it on," I say.

At the next stoppage of play, I hold my side and say I have a cramp and have to sit. I will, of course, "recover" for the next game, in which Bawful, my other buddy and I will now be on the same team. Team-I-Don't-Like problem solved. I know, it's like driving in the breakdown lane during a traffic jam, but I do that too. Because I'm Evil.

Good Samaritan Intimidation (GSI): Bawful and another dude (who has quickly become his nemesis in the league) start playing physical. I can tell it's going to get out of hand. Bawful is being pretty sedate about the physical play, mainly because he was getting over a bout of food poisoning. Still, an angry Bawful is a dangerous customer, and when I see Nemesis give Bawful a hard two-handed push in the back, sending Bawful to the floor, I jump in before Bawful can even get up.

Nemesis blows air out his mouth and sarcastically says, "I'm afraid." This is white guy basketball code for "I really am afraid, but am going to pretend not to be."

Nemesis was the model of a clean player after that, and even apologized to Bawful later. So my GSI bit prooved incredibly effective. And why wouldn't it? Can you imagine if you're getting physical with someone on the basketball court and a third party steps in to warn you about your adversary? It's much more effective than if Bawful himself had started jawing with the guy, since such behavior is commonplace on the court. I'm kind of proud of myself with this one. You never know what kind of bullcrap is going to come out of your mouth on the basketball court, but in this case, I unexpectedly managed to not only calm down the combatants, but plant a seed of fear into Nemesis's head that will hopefully keep him from being overly aggressive in future weeks. Score one for not being Evil (or at least for shrouding the Evil in pretend goodness).

[Note from Basketbawful: While I'm not trying to discount the intimidation factor, I've also noticed that there are cases where, in the heat of battle, somebody will take a cheap shot that they -- and everybody else -- knows is just plain wrong. These people seem medically incapable of admitting their fault at that moment. They just can't do it. But if they have anything resembling a human soul, they'll realize it during the game and try to apologize sometime afterward. I guess we could call that something like "post-asshat apology" or something like that. Anybody got a better suggestion?]

Pull a Pierce: Late in the evening, Nemesis hastily limped off the court with a twisted ankle. He looked to be walking around normally soon after. I thought he had faked-injuried his way off a bad team (like I had), but Bawful remarked to me that Nemesis (like many people) probably freaked out a little when he first twisted it, thinking he was hurt worse than he really was.

Bawful, with the Game 1 NBA Finals theatrics still fresh in his head, knew exactly what I meant.