This was reported on the Bay to Beijing blog: Matt Kaplan, a 22-year-old from Lafayette (Indiana California, presumably) was seen leaving Team USA's game against Greece in a Baron Davis Golden State Warrior Number Five jersey. 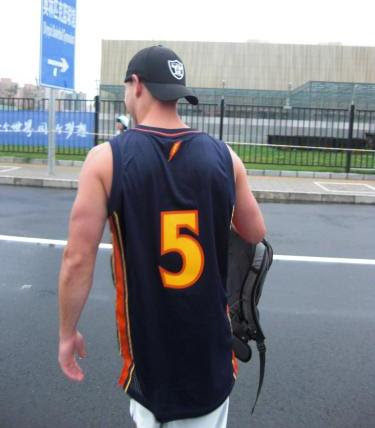 That's right: Kaplan removed B-Diddy's name, creating a unique and totally anonymous jersey. For some reason, this reminds me of the mid-90s NBA Live game where they couldn't include Michael Jordan on the Bulls because of copyright issues (read that: "Mike is a greedy bastard"), so they put some nameless player (with all Jordan's stats and attributes) in his place.

Actually, Kaplan has a great idea. As soon as I get home from my Clark Kent job, I'm going to rip the name off my Jermaine O'Neal Pacers jersey. Which, now that I think of it, I sort of wish I would have done about two years ago...

Anonymous said...
Yeah, these kind of jerseys are pretty common in China. When I was there, you could get virtually any team with either a number or no number, but no name. Saw some funny blank jerseys on Chinese nationals while I was walking the streets (and then they stared at me back, being that I'm a white monster and everything).
8/15/2008 1:29 PM