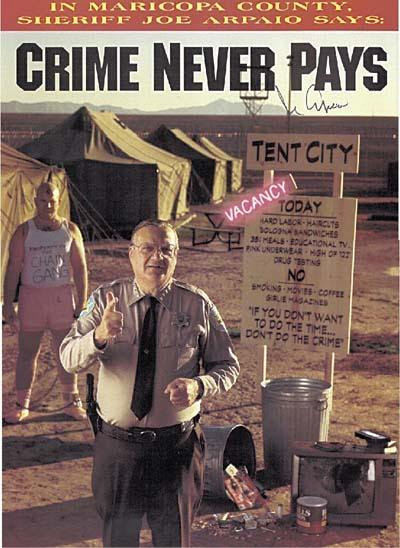 Joe Arpaio -- known far and kind of wide as "America's Toughest Sheriff" -- has de-deputized The Big Law Enforcer for his use of profanity and (especially) the dreaded N-word during that freestylin' Shaq Rap Attack on Kobe Bryant.

In case you have no idea what I'm talking about, here's the backstory: Arpaio, sheriff of Maricopa County, Arizona, presented Shaq with a special deputy badge in January 2006 after The Big Constable visited Maricopa County. The Big Flatfoot was then given a second badge when he was promoted to the rank of special-deputy colonel of his posse -- a volunteer organization of crime-fighting citizens -- after he and the Miami Heat won the NBA championship in 2006.

Said Arpaio: "I do believe in free speech, but I don't believe that in law enforcement to use this type of language is proper. We set an example, a moral, ethical example and I would like to think that basketball players and all athletes should be setting a positive attitude for our young people. He has some type of representation of this office. I just want my badges back. I don't want anybody to say that he has my badges and I condone this type of activity."

I guess Joe hadn't seen this old TNT interview before he deputized Shaq...


He must have also missed Shaq's "racially insensitive" comments on Yao Ming.

Of course, The Big Humorist explained to ESPN's Stephen A. Smith that he was just funnin'. But Arpaio was forced to shenanigans...particularly since he had fired a cadet last April for using the N-word in the presence of other officers. "Is that an excuse? That you're joking? What's that got to do with it? You've still got to be held responsible for your actions. I can't have a double-standard. I can't fire one deputy for using a word and just let him get a pass when he's got my badges. You do the right thing, no matter who he is."

The right thing. Okay. I guess I can see that. Except I have a sneaking suspicion that, in the first place, Arpaio only deputized Shaq for the sake of publicity. And taking back the badges is also being done for publicity, and probably to "make a point" to his other deputies and deputy wannabes. But it seems a little hypocritical to me. I mean, Shaq filmed Kazaam and recorded Shaq-Fu [Da Return] long before he was awarded honorary cop powers in Maricopa County. If Arpaio disregarded those crimes against humanity, then surely he could have overlooked Shaq's silly little anti-Mamba rap.

Not everybody is ripping on the Big Improver for his extemporaneous limerick, though. Rappers Snoop Dogg, Nas and Cory Gunz have spoken up to let everybody know it's all cool. Snoop, who's a big Lakers fan, said: "I love it, because it only makes for a great game on the court. Both of them is rappers; they tried rapping before. They know ain't no rules when it comes to rapping. Shaq has all access and the right to do and say what he wants to say in fun, in the spirit of rap."

Nas sort of said the same thing in, uh, stronger terms. "I heard about it. Shaq is my man — f*** Kobe. Nas' wife Kelis, who was in the background talking to her friends, said "Big up to Shaq."

Gunz, who was celebrating his birthday with Shaq during the rap, said: "It's all in fun. People thought he was doing it just to take shots at Kobe. He's not even thinking about [Kobe] like that. As a matter of fact, it's no bitterness towards Kobe at all. It was all done in fun to get the crowd hype. That's what real MCs do: get the crowd involved."

There you have it. So all you cracker sheriffs out there can just calm the hell down. This is hip hop man, hip hop!

Fun fact: Arpaio got the moniker "America's Toughest Sheriff" because he banned smoking in the jail, feeds inmates bologna, makes non-English speakers learn English, runs chain gangs, and forces prisoners to wear pink underwear. To which I can't help but think: That makes him America's "toughest" sheriff? As far as I'm concerned, lunchmeat sandwiches and mildly feminine boxer shorts should be the least of an inmates worries. They should be eating broken glass and smashing rocks 28 hours a day. They're prisoners. I'm just sayin'.

Two headlines about Joe Arpaio from boing-boing.net, further proof that "tough of crime" should always be seen as a warning signal.
6/25/2008 2:58 PM

acnefighter said...
This is hilarious. Granted, I thought the Kobe freestyle was a bitch-move on Shaq's part, but for the guy to have his badge taken away over a Youtube'd clip is just stupid. I mean, really, he believed before that Shaq had never said nigga before? Hadn't he hard about all of Shaq's rap albums from before? How about the times he's sworn on live tv?
6/25/2008 11:13 PM

He gave himself that moniker by the way. It's all about the publicity with him. He'll probably hold a press conference one day to give back the badges- after Shaq saves a kitten that was stuck in a tree or something.
6/26/2008 3:10 AM
Post a Comment
<< Home
Subscribe
RSS Feed
Mailing List

Word of the Day
Previous Posts
Word of the Day: Shaqenfreude
The 2008 NBA Playoff Recap
Shaq may forgive, but he never forgets
Word of the Day: Calvin Murphy
That's one big baby...
Boston, Yahoo confuse sports again
Thursday afternoon leprechaun love
The perfect gift for NBA playahs
Out of Contexts: Kobe Bryant
Worst of Game 6 of the 2008 NBA Finals