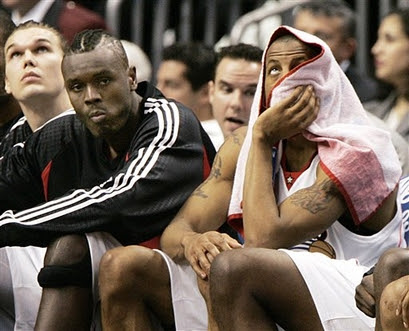 Hey folks. Sorry for the delay on yesterday's WotN. Unforseen circumstances and all that.

The trade gang: Oh, if only they had Larry Hughes back. Cleveland's big mid-season trade continues to be a big-time failure. Delonte West was decent (12 points, 8 assists, zero turnovers), but he shot 4-for-11. Wally World shot 1-for-6 and had just as many turnovers as points (4). Ben Wallace had 2 points, 2 missed freethrows, 6 rebounds, and 3 fouls. Joe Smith scored 1 point, shot 0-for-6, and grabbed 4 rebounds (which means he was outrebounded by both of Washington's starting guards). When a blockbuster trade can't yield 20 points out of the four players involved...well, that's trouble.

LeBron James: King James led the Cavs with 34 points, 10 rebounds and 7 assists, and his 24 second-half points were the reason Cleveland had a shot at winning the game. But...he also shot 8-for-21, continued to jack up questionable threes (3-for-9), and committed a game-high 5 turnovers. Even worse, Caron Butler hit what ended up being the game-winning layup against LeBron's defense, and then LeBron failed to answer at the buzzer after Caron had trash-talked him. And just watch his reaction after the miss (from Odenized):


Look, I realize that I bring Larry Bird up way too often, but he's my gold standard for How Legends Should Act and React. I can remember back in the day when Bird would get hit at the end of a big game -- regular season or playoffs -- and not get the call. When that happened, he'd just stalk off the court with executioner's eyes, and everybody knew he was going to kill somebody in the next game. I know we're living in the Duncan Face Era in which everybody has to make their case to the refs, but let me ask you this: Wouldn't it have been much more badass if LeBron had just stalked off the court instead of making that all-too-familiar pleading gesture? I think so.

Darius Songaila: So not necessary (also from Odenized).


What I want to know is: Where's the ejection? Where's the suspension? Has David Stern been replaced by an alien doppleganger? It may be time to check his basement for body snatcher pods, because something's not right. Last season, Kobe Bryant got suspended twice during the regular season for clipping first Manu Ginobili and then Marko Jaric in the face with an elbow while he was trying to draw a foul, and we all remember the infamous Stoudemire/Diaw suspensions from the Spurs-Suns series. This year, it's okay to jump off the bench during an altercation. This year, it's okay to intentionally punch somebody in the face(ish). And I don't care what anybody says: That shot was intentional. I've played enough basketball to know the difference between "accident" and "on purpose."

Way to be consistent, David.

The cruelty of fate: Gilbert Arenas is officially done. Again. His surgically repaired knee has both a bone bruise and a pinched nerve. Serious bummer for Agent Zero fans.

Mike Bibby: He gave Beantown's bandwagonite something to laugh about: 2-for-8 shooting, 1 assist, 3 turnovers.

Al Horford: I've been Horford's biggest supporter all year. Still...the rook is starting to wear on me with all the taunting and rough play. And you know what that takedown of KG got him? Slapped by Ray Allen, that's what. I keed. But seriously, settle down, kid.

Jeremy Richardson: One trillion. Thank you for playing but not playing, Jeremy.

Mario West: A DNP-CD? He can't even get his accustomed 30 seconds in a blowout? Okay. Mike Woodson is just screwing with Mario at this point.

Philadelphia "fans": Despite all of the unexpected success, the Philly crowd booed the home team at the end of the third quarter. Sure, the Sixers were down by almost 30 points. But that's a pretty lousy "thank you" for a great run. Shame on you guy.

Samuel Dalembert: His team has lost by at least 17 points in every game since he got the new 'do. It can't be a coincidence.

Detroit Pistons: They've been utterly devastating the last two games. It makes you realize how tough they could be if they focused all the time. It also makes you wonder why they don't focus all the time.

Lindsey Hunter: He played a sum total of 3 seconds during a game in which his team spent a lot of the second half up by around 30 points. He and Mario West should form some sort of limited PT support group.

AOL Messenger: Here's another fan-submitted masterpiece: "Loyal reader Chris (Mavs fan, not the other one) here, found a great mis-print ad. 76ers and Magic next Tuesday? This ad showed up at the top of AOL Messenger when I logged on this morning. Not to mention that Kobe/Shaq have nothing to do with either team. I know the text looks a little un-centered anyway, but of course I didn't touch this in Photoshop." Thanks, Chris. Also note that the fact that Shaq is already out of the playoffs makes that two-face graphic pretty silly. 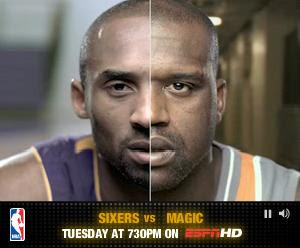 Anonymous said...
How about Rookie of the Year voters for WotN? Because firing off 7 for 17 and 8 for 20 every night for 20 PPG is more impressive than 50% FG, defending, boxing out, rebounding, and anchoring the middle for your team. I also find it funny that Durant led guards of the league in blocks, but that's obviously because he's the same height as Horford and Scola, two more deserving RotY picks.

As for Philadelphia game, I remember hearing the boo birds in the first quarter. The city's pretty famous for its boos. After all, they booed Santa Claus before.
5/02/2008 9:39 AM

anne said...
Yeah, I'm glad you posted today, because yesterday I actually had to you know, work, and I usually try to avoid that.

Re: the Philly fans - it irritates me to see "fans" do that to their home team. I also get pissed off when the "fans" leave early if the home team isn't doing well (I'm looking at you, Mavericks "fans"). Regardless if the team is sucking, there are at least a few guys out there busting their asses off, and these fools could show some respect for them.

And even if you're mad about the game, you paid money for that damn ticket, and you are an idiot if you leave before it is over. You might as well have saved your money and stayed at home.
5/02/2008 11:15 AM

Anonymous said...
left off of your list.. people who voted for Durant for ROY.. anyone can shoot 100 shots a game with NO D, NO REBOUNDING, AND NO LEADERSHIP. Horford should have won, oh but wait, he didnt have an NBA commercial so that explains that.
5/02/2008 12:00 PM

The Third Heat said...
Well, the NBA was being consistent with these particular playoffs by being lenient with everyone, but now they have suspended Songaila.

Well, NOW we know that Stern is pushing A) For a Celtics-Lakers Final, and B) For a Celtics-Cavs East final.
How can you suspend Songalia and NOT suspent KG for his WORSE hit on Zaza Pachulia? You have the videos, compare the two, and please explain that logic. Not to mention the aforementioned non-suspension of Perkins for clearly stepping off the bench during that altercation.
It makes me depressed to be a Raptors fan, because this means that, unless we kidnap LeBron James and force him to play for us, sorta like "Celtic Pride", we're never getting ANY league assistance towards winning a championship.
5/02/2008 12:34 PM

I was pretty upset about Durant winning it as well. Some columnists used excuses like "he's facing the other team's best defender every night." Even if he is, I don't see how that explains the lack of rebounding/defense/overall effort. Some have said (Bill Simmons) that he should be given the ROY because of the high level of dysfunction of Seattle. Simmons argues that no other famous rookie has ever been put into such a terrible situation.

Personally, I think the ridiculously bad situation of the Hawks is forgotten because of how long they have been terrible. In Seattle, the franchise might be moving and the fans are sad about the possible loss of the team. They also chant things like "Save Our Sonics" and try their best to keep their team around.

In Atlanta, no one give's a rat's ass about the Hawks. Don't tell me otherwise, because I lived in Atlanta from 1998 to 2005. No one cares. If the Hawks left, I'm pretty sure even the Phillips Arena manager wouldn't notice or care. The team has a culture of low expectations and losing (this 37 win season is the highest in nine years!). So you tell me, is it harder to be a rookie and work hard in Atlanta or in Seattle? At the very least, they have to be equally challenging, right?

Furthermore, poor Durant has to play out of position for a terrible coach, according to supporters. Um, Hello? Horford plays for Mike Woodson, who is arguably the worst coach in the NBA. And you tell me which is harder: being 6'10 and lengthy and playing SG or being barely 6'10 and playing center? Keep in mind, Horford has no big banger type coming off the bench for him. He's been left to deal with Shaq, Dwight Howard, Yao Ming, etc.

I understand Durant is only 19. If this race was a close one, that could have been the swinging factor. But when you look at the facts, the race isn't close.

But of course ROY really stands for highest scoring average. Too bad Horford wasn't selfish enough to fire off 6-7 more shots per game because that would have given him a PPG of about 17 and the ROY award. I guess he didn't deserve it.

Most of the time, awards are debatable. This year's ROY really isn't. If you think it is, you need to open your eyes and snap out of the media created Durant love-fest. It hardly matters though. This will only inspire Horford to become a real beast next year while Durant is still chucking his team out of the playoffs.
5/02/2008 1:19 PM

Dan said...
I thought the punch was on purpose, too, the first couple of times I looked at it. But listen to his explanation, then watch Lebron's arm. It clearly forces Songaila's hand to hit his face. In fact, it looks more to me like Lebron purposely hit himself in the face than like Songaila hit him.
5/02/2008 1:52 PM

Anonymous said...
Have to agree with 'Bawful on the rough play of these playoffs- it DOES make it more interesting. But then again, I dream at night of a rematch of the 1994-95 Rockets/Knicks Final.

Hey, do you think we could arrange a tag team, no-holds-barred Smack-Down in the Octagon between Charles Oakley/Vernon Maxwell (with Anthony Mason as an alternate) in one corner and Zaza Pachulia/Brenden Haywood (Darius Songaila as the alternate) in the other?

When you look at it like that, it kind of puts things in perspective: the NBA is NOT as tough as it used to be. In fact I think Bill Laimbeer should get out of coaching women's basketball and suit back up for the Pistons to bring thuggery back to it's old glory.

I mean, nobody with two brain cells to rub together would have touched Mace or Oak with a 10-foot-pole when they were thugging it up in New York. THAT was basketball! These silly slap-fights that take place in today's game, while entertaining, hardly measure up to the gold standard of Mourning Vs. Oakley.

Jim in KFalls said...
"Has David Stern been replaced by an alien doppleganger? It may be time to check his basement for body snatcher pods, because something's not right"