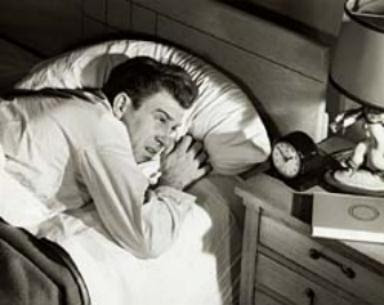 beersomnia (bir-sahm'-ne-uh) noun. A tendency to wake up early and the corresponding inability to go back to sleep -- despite near-to-complete exhaustion -- after a night of heavy drinking. (With an emphasis on the "heavy" part.)

Usage example: Hungover so badly you might still be drunk? Is it 6 a.m. but you feel more wide awake than you've ever been? That's beersomnia, my friend.

Word history: The term was coined on Sunday morning, March 30, 2008. The previous night, Statbuster, Evil Ted, BadDave and I had attended a rather ugly (but ultimately satisfying) Bucks/Bulls game at the United Center. Naturally, the game had been preceded by a trip to the Billy Goat Tavern and was followed by a trip to a great little pub called Timothy O'Toole's (which, I am not kidding, had an amazing and perhaps unheard of 3:1 female-to-male ratio). Oh, we drank at the game, too.

The evening ended in the following manner: We closed out O'Toole's and then headed over to an all-night Dunkin' Donuts for some "nourishment," but not before I had wrapped the most recent issue of the Redeye around my head and announced to everyone within screaming distance that I was, in fact, David Schwimmer from Friends (Schwimmer's giant face was on the cover of the paper). Have you ever tried to convince a doughnut shop employee to give you free food at four in the morning while steadfastly maintaining that you're actually the famous person emblazoned on the newspaper that you have awkwardly crafted into a crude mask? Ha, ha...who am I kidding? Of course you have.

We had wisely rented a room at a Red Roof Inn not far from O'Tooles. (We had taken my car there, and let me tell you: There's nothing more disturbing than handing over your keys to a valet who is both deaf and mute. Unless he's also blind, I guess.) We returned to the room with our doughnuts and whatever bizarre thing I'd bought (a panini...I think?) and proceeded to watch Girls Gone Wild informercials until we mercifully fell asleep. I slept slouched down in a desk chair but was comforted by the fact that I'd Bogarted the blanket off of BadDave's bed, thus ensuring that he would freeze his balls off in that cold-ass room (none of us had the necessary wisdom or basic motor skills necessary to turn the heat on).

We all woke up simultaneously about two hours later.

The upside of the early morning was watching The Marine, starring John Cena (best known as John Cena of the WWE) and Robert Patrick (best known as the evil Terminator from T2). The Marine was, without question, the best worst movie I have ever seen in my life. Cena was trying so hard to become The Next Great Action Hero that it must have been causing him physical pain. Not that the character he played, John Triton, felt any pain. Ever. Every place Triton was at in the movie eventually blew the hell up: Gas stations, restaurants, riverside marinas. I'm not kidding. In fact, the only place that didn't blow up was the shack owned by the hillbillies who kidnapped him while he was chasing after the jewel thieves who had taken his wife hostage and were trying to escape on foot through a swamp after Triton had destroyed their SUV with his bare hands. And I'm not making any of that up.

Some random highlights from The Marine:

In one scene, Triton had stolen a cop car and was following the jewel thieves' SUV. He was driving directly behind them, and no fewer than four of the thieves opened fire on him with machine guns at point blank range. They turned the car into swiss cheese -- seriously, all that was left by the end was the frame and an engine -- yet not one bullet touched Triton. He didn't even get the official "Gunshot Wound To The Shoulder." But eventually his car ramped up over the SUV and randomly blew up while in the air. Unbelievably, Triton lived, but his miraculous survival went unexplained.

In another scene, one of the jewel thieves went into a long soliloquy about how he was sexually abused as a child by his camp counselor. "First, he offered me friendship. Then...he offered me something I never should have accepted." Now, this was the crazy jewel thief who earlier in the movie had killed a cop and blown up a gas station for no reason, and he had also spent most of the movie threatening to kill his cohorts in various violent and disturbing ways. So I guess the writers decided to cram in a little character development to explain why he was so damn looney before he died.

In the very next scene, the crazy child-molested jewel thief goes into the basement-ish area of the restaurant they've taken over in order to start the generator (because, of course, the thieves want to listen to the juke box while they hide out). There were several places to hide in this basement, and we were expecting Triton to jump out from behind a barrel or something. Imagine our surprise when he burst through a freaking wall and broke the thief's neck. Why sneak around when the laws of physics don't apply to you?

Okay, I'll stop boring you after this last part. After a lengthy battle in which Triton kills most of the jewel thieves with his bare hands, the head thief (Patrick) and his girlfriend manage to escape with Triton's wife. A police officer shows up while Triton is surrounded by several dead and horribly mutilated bodies. When the cop tries to arrest Triton -- as any sane cop would -- Triton says, "You don't understand. My name's John Triton. I'm a marine. They've got my wife." Interestingly enough, this explanation wasn't good enough even in a crappy movie like The Marine, so the cop tries to cuff him anyway. But of course Triton knocks the cop out, steals his boat (yes he arrived in a boat), and leaves him helpless and alone in the middle of a swamp in which, about three scenes prior, alligators had rushed out of the water and eaten a guy in about five seconds flat. That cop was never seen nor heard from again. But I'm sure he was fine.

Triton then used the cop's boat to follow the remaining jewel thieves who were driving a truck on a highway. You read that correctly. It was a car chase involving a boat. Fortunately for Triton, the thieves -- for reasons unknown -- decided to take a victory lap around the previously mentioned riverside marina, which allowed Triton to leap from his boat onto their truck and kill them with extreme (and exploding) prejudice.

What's the point of me boring you with this story? I'll tell you: The next time you have a night of heavy drinking planned, realize beforehand that you won't be sleeping in and rent The Marine. It'll give you something to do while you're suffering through your beersomnia.

Anonymous said...
Good times. Except that you left out the bit about the bathroom reeking like sulfuric springs and toe jam. Before we arrived.

At least we watched Firefly too. And the chocolate milk on top of a night of Guiness Stout was officially a bad idea.
4/18/2008 9:47 AM

Anonymous said...
hmmm I think you can rotate the banner somehow like eachtime you refresh you see a different one

Anonymous said...
I love the movie review of The Marine. My friends and I were watching it late one night and I swear we had the exact same analysis of it that you did. But you have to love how at the end of the whole thing, Triton kills the head thief by swinging him over his shoulder with a chain while simultaneously breaking his neck. Best. Kill. Ever.
4/18/2008 11:00 AM

Anonymous said...
I've been suffering through beersomnia all morning. Which is probably why I'm on this site at 10:30 in the morning.

Drake said...
I've had beersomnia once.

I was watching the Knicks face the Pistons last year at a bar down in Greenwich Village in NYC. Normally, heavy drinking comes naturally when it comes to watching the Knicks. But they won this game in overtime (or double overtime; I don't really remember). I don't normally drink at all, so the heavy drinking part came after I tried to match my brother's buddy drink for drink. Well, since I didn't normally drink, I never got drunk. But I did vomit, I did have a massive headache, and I did have slight balance problems.

Anyway, as soon as I got back to my brother's place, I passed out almost immediately. After an hour or two, I wake up to find my brother and his girlfriend just falling asleep. I then tried to go back to sleep. Impossible.

I drank some water and Gatorade to try to relieve my uneasy stomach and headache. It helped do that, but it did nothing to help me sleep. I for some reason had some residual vomit still brewing in my stomach, and it was only after I got rid of it that my stomach could finally rest easy. But falling asleep was another story. By the time I decided to just go out for a walk, it was already 7 am.

So why didn't I watch television? Well, my brother's room is technically a cordoned off living room with a window and balcony. The divider between his "room" and the living room, which had the TV and the couch I was crashing on, was a curtain. Needless to say, it was not much of a barrier against sound or light.
4/18/2008 2:37 PM

Jey said...
Great! Thanks for ruining the movie for me! It was next on my list of absolute must-sees! Nothing like a good crappy movie to make a hangover feel like sex, though, eh?