Chris Bosh might have been given an early vacation by the Orlando Magic, but the dude is a straight-up lovemeister. (I guess he's a lover, not a fighter.)

From eljpeman (who's too lazy to open his blogger account): "This could probably get into the man love series. I would have said that they will have a sweaty and passionate night later on, but i guess they are already having it now." 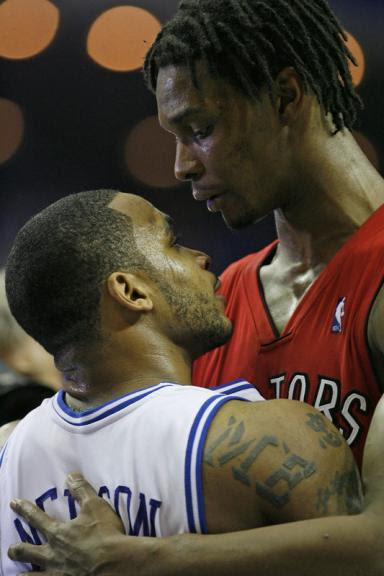 From anne: "There's a whole series of Bosh man love photos up today. I like this one in particular, as he looks like he's blowing in Superman's ear. What can you say, Bosh is a romantic." 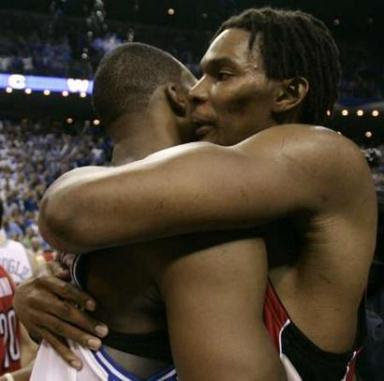 Anonymous said...
HHAHAHA I was waiting on this since they had dinner after game 1

m. Alana said...
Regardless of BFFs here, this is what the story of these two pictures looks like to me:

Andrei said...
If anyone had any doubts about how incompetent Mike D'Antoni is, it should have evaporated tonight. I just caught one of those "wired" segments and they showed D'Antoni kidding around with Tim Duncan in the first part of the segment. Would you ever see Popovich kidding around with the other team's star in an elimination game? This of course was followed by the capper. As Gordan Giricek runs into the game, D'Antoni tells him: "Ugh....you guard Oberto, alright? Keep him off the boards." Sounded like he was guessing and also asking Goran fucking Giricek to rebound, good stuff. Also, sticking with Shaq as he clanks free throw after free throw was good too.
4/29/2008 9:57 PM

Anonymous said...
Man, I remember when the Pistons walked off the court in 1991 after the Bulls knocked them out. No hand shaking there. No hugs, kisses, butt slaps, high fives, dap, or footsie. Just 12 guys walking off the court, disgusted with themselves and pissed about being eliminated by a hated rival.

I don't care if your opponent is your best friend, brother or cousin, loosing should suck hard and piss you off. If you want to congratulate your opponent, fine, shake hands, but, damn, stop being so god damned lovie-dovie with the people you're competing with.

anne said...
Yeah it looks like Chris is carrying Dirk off for a night of man love. Hopefully the man love is more gentle than the full on ass raping that the Hornets did to the Mavs.

**cries because my team is shitty**

anne said...
Hey Bawful, I was looking at the photos from the Suns/Spurs game, and noticed the caption on one of them:

"Tim Duncan #21 of the San Antonio Spurs congratulates Steve Nash #13 the Phoenix Suns after Game Five of the Western Conference Quarterfinals during the 2008 NBA Playoffs as Tony parker #9 looks on at the AT&T Center on April 29, 2008 in San Antonio, Texas."