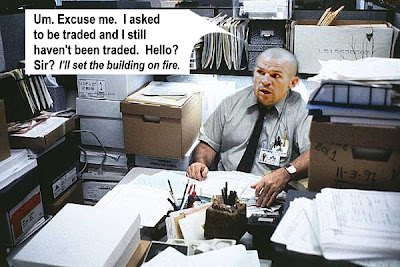 The Pau Gasol sweepstakes. The Shaq resurrection. Collinsgate. After the dust settles, I'm left asking: Did everyone forget about Jason Kidd?

The most talked about trade, involving Kidd going to Dallas for a ball of mystery meat and Devin Harris going to Portland, was put in a salary cap sleeperhold and is now DOA. Even if they could shoehorn the salaries to make it work, the trade didn't make much sense for Dallas. I don't see why Dallas would trade Devin Harris, who is 24 and in the midst of a breakout season, for Jason Kidd, whose scoring and shooting is at Darrell Walker levels and, at age 35, could be toast a year from now. Dirk Nowitzki is 29 and Josh Howard is 27. It's a little early to go into "win now" mode for these guys.

The Spurs were in a similar situation when they balked on the Jason Kidd/Tony Parker trade a few years ago. At that time, Tony Parker was 21 and as green as grass, but why trade a kid with plenty of upside for a max contract with questionable shelf life and iffy scoring ability? One thing led to another, and Tony Parker became 2007 Finals MVP. That worked out well.

Now, the Nets' biggest problem is their inability to score, and Kidd is as much the problem as he is the solution. In a surprising yet unsurprising statistical bastardization, the Nets are 4th in the league in assists but 29th in FG% and PPG. Which means if it isn't a feed from Jason Kidd, or a Vince Carter or Richard Jefferson isolation, the Nets are practically helpless. And the fact that Jason Kidd is 58th(!) among point guards in FG% isn't helping. Why there was no discussion to pick up offense-in-a-can Earl Boykins is a bit puzzling.

Blair said...
Alright, as far as being offensively handicapped, the bottom line is that Jason Kidd makes everyone around him better. According to John Wooden that is the true mark of a superstar. Wherever Jason Kidd goes, the team will improve, guaranteed. How many triple doubles does this guy have in his career???? My guess is he has more than all the point guards combined that are in the league right now. Stop "kidding" around
2/08/2008 3:33 PM

Statbuster said...
Blair - I love Jason Kidd as much as the next guy, but there's a good chance he'll retire a NJ Net. He should've screamed a little louder a year or two ago, before his scoring went from "not a liability" to "god awful".
2/08/2008 5:22 PM

Anonymous said...
He makes everyone around him better? He sure hasn't been doing much for Vince Carter. If it is true, then without his flawless vetern leadership, the Nets must REALLY suck. Lately it seems like he's been doing alot of whining, missing games, and throwing up bricks.

He started phasing out a couple years ago, and it's really starting to show now. He'll be done for completely in a couple years with a wonderful carrer to show for it and a bad back. I wouldn't trade Brandon Bass for him. All he'll do is eat your salary cap.
2/08/2008 5:24 PM

i just have a small piece of criticism about your site in general. take it or leave it.

i think you need to shorten your usual "worst of the night list". as it is, you pretty much just list every team and player that played below expectation. the nature of variance means that yeah, every night, someone will have an off night and some team will not perform.

your list now pretty much gives the same information as bringing up the box scores everyday and naming the players/teams who shot the lowest FG%.

i mean, this is hardly ground breaking. reserving this list to talk about how bad the knicks are or how crappy antoine walker is would keep it more significant i'd think.
2/09/2008 2:38 AM

Anonymous said...
@chris - what capspace ??? the mavs got no capspace.

"The Spurs were in a similar situation when they balked on the Jason Kidd/Tony Parker trade a few years ago."

HUH ???? WHAT TRADE ???
the spurs offered kidd a contract when he was a free agent and they had capspace (manu and parker on rookie deals).
they wined and dined him (if i remember correctly popovic and duncan took him out to dinner). the spurs probably would have been unable to keep parker and would have traded him, but not necessarily to the nets.

he hesitated for a while, and in the end he picked new jersey's offer. because of money (nets could offer more money - longer deal, bigger raises), because he wanted to try and win as "the man" and not as duncan's sidekick or for whatever reason, he chose new jersey.

Anonymous said...
Just to balance out the criticism, Statlover, that picture is the funniest basketball related picture I have ever seen. It might be a bit too retro, I don't know how many people here remember office space, but know that your effort did not go unlaughed at...
2/10/2008 12:26 AM

Unknown said...
In a matter of 10 seconds, Ginobili was just compared to Earl Campbell and Wyatt Earp during the Spurs/Celts game... What?!?!?

It's things like this that make me think I could call games. "You know, that Yao Ming really reminds me of Winston Churchill and Montazuma!".
2/10/2008 1:33 PM

Anonymous said...
I love to hear "Kidd makes everyone around him better." It's a dangerous thing even to ponder how bad Jason Collins would have been without Kidd making him better.
2/11/2008 10:21 AM

Word of the Day
Previous Posts
The Phone Call (and Worst of the Night)
Worst of the Night, and more thoughts on Shaq to P...
Mark my words: Shaq will be the right move
Worst of the Ni...Shaq to Phoenix?!
While you were busy dreading a Lakers 39-game win ...
Powerless rankings: Western Conference
Word of the Day: man region
Worst of the Weekend: Super Bowl Edition
Christmas comes early for the Lakers
How to get snubbed from the All-Star Game