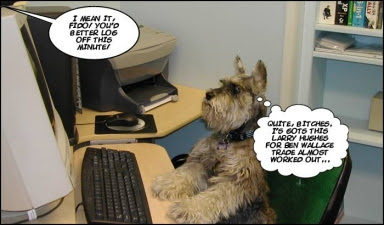 Sweet Lincoln's mullet! Did somebody in the NBA head office fall asleep and mash their face all over the keyboard of the trade machine? There was a flurry of last-minute player movement over the last couple days, and most of it made very little rational sense. But don't worry about forming an opinion on all those crazy deals. I'll go ahead and do that for you.

Chicago Bulls: It's just like Teddy said to Leonard in Memento: "Someone has to pay, Lenny. Somebody always pays." John Paxson needed a scapegoat for the way he mismanaged his team's roster and continued to misjudge its talent. On Christmas Eve, the sacrificial lamb was coach Scott Skiles. Then, minutes before the trade deadline, it was Ben Wallace.

Wallace became the de facto poster boy for a Bulls team that has fallen wildly short of the lofty "We're going to the NBA Finals this year!" preseason expectations. That might not be fair - after all, the disappointing play of Luol Deng, Ben Gordan, and Kirk Hinrich has been at least as crippling - but it's true. That's the burden of being not only the team's highest paid player, but also the free agent acquisition that was supposed to catapult a promising young team into glory.

The Ben Wallace signing was a mistake from day one. And I'm not just speaking with the perfect 20-20 vision of 127 games worth of hindsight. Looking back to the summer of 2006, the Bulls wish list included "proven low post scorer" and "go-to scorer who can create his own shot, preferably a big guard who can also defend other big guards." Wallace couldn't address either of those needs. He can't score, not from the perimeter, the post, or the line. (I don't know if the NBA keeps stats on number of airballed freethrows, but I'm pretty sure Ben leads the league in that category.) What's worse is that Wallace's known skills - defense, rebounding, shot blocking - declined considerably about five seconds after he put on a Bulls uni for the first time.

I know why Pax signed him, though. Buying Ben Wallace away from the Pistons was as much a symbolic move as anything else. It was supposed to show that the Baby Bulls were "all growed up," a team to be taken seriously come playoff time. The fact that it weakened a division and conference rival didn't hurt either. Although the Pistons didn't suffer that much of a dropoff, and that was an ominous sign. As was Wallace's deteriorating stat line. As was the headband flap. As was Big Ben's habit of showing up late for practices and games...not often enough, maybe, to cause a full-blown controversy, but often enough to make management and fans question his passion and dedication.

Paxson should have made a big move last season. He should have aggressively pursued Pau Gasol when he had a lot of trade value in the likes of Deng and Gordan, not to mention P.J. Brown's big, fat, expiring contract. He also should have made a move over the summer. Anybody who watched the Pistons' systematically dispatch the Bulls in the second round of the playoffs should have been able to tell that Chicago was at least a piece or two short of making any kind of serious run at the Finals. I think some people were still delirious about that first-round sweep of the defending champion Miami Heat. But now we know for sure that The Sweep was more about the Heat falling than the Bulls rising. So once again Pax stood still while the Celtics got Kevin Garnett. He didn't bother to make a strong push for Kobe when it looked like The Mamba might be available, nor did he try to pry Gasol away from the Grizzlies. "I like our team," he said over and over again.

Oh well. You can't change the past. And now Ben Wallace is gone. In his place are Drew Gooden and Larry Hughes (plus Cedric Simmons and Shannon Brown, but we all know they were just throw-ins). And actually, Gooden is probably a significant upgrade from Wallace. He's younger, can (kind of) score inside, and can actually hit his freethrows (who knew 72 percent would ever sound so good?). Hughes...well, he's an overpaid gunner who shoots a low percentage (37) and needs a lot of touches to be effective. Basically, he's a taller Ben Gordon.

I have no idea what the Bulls want with Hughes. They already have both Gordon and Thabo Sefolosha at the two-spot. I assume Hughes will probably start and Gordon will come off the bench, leaving Sefolosha (once again) in No Man's Land. I suppose it gives Paxson some off-season flexibility. With the Hughes security blanket - smelly and full of holes though it is - Pax can choose to not re-sign Ben Gordon, or maybe trade him. But for now, there's a logjam in the backcourt, where the Bulls have not one but two inefficient shooters.

Cleveland Cavaliers: I'm pretty sure this trade was not what LeBron James had in mind when he asked for more help. Kobe throws a bitch fit and gets Pau Gasol, while LeBron plays the good soldier and gets Ben Wallace, Joe Smith, Wally Szczerbiak, and Delonte West. Doesn't give King James much of an incentive to play nice next time, does it? I've heard that this was a "win now" move for Danny Ferry and the Cavs. Win now? With Ben Wallace and Wally Szczerbiak? Seriously? Wallace is aging at an exponential rate. By next Thursday, he might be a skeleton in a tattered jersey with a wispy 'fro. That's a downgrade in my book. Wally, actually, is an improvement over Larry Hughes. He's a better shooter, which will provide better spacing for LeBron's many drives to the basket. Joe Smith was actually playing great for the Bulls, and he'll be a decent backup for Zydrunas Ilgauskas. Mike Brown will probably play West enough for a few games to find out why nobody wants him. All in all, the Cavs got a little bit better, but not enough that it'll matter come playoff time.

Detroit Pistons: Juan Dixon gives the Pistons another scoring guard off the bench. Dixon didn't like playing limited minutes in Toronto. But I'm sure he'll just love doing it in Detroit.

Houston Rockets: They got rid of locker room cancer Bonzi Wells and salary cap burden Mike James. That's a classic example of addition by subtraction. Bobby Jackson is a nice option to bring off the bench, plus he's tough and has playoff experience. Adam Haluska and Gerald Green were a couple of "whatevers" in this trade.

Minnesota Timberwolves: Let the Kirk Snyder Era officially begin! Wait, what? His contract expires at the end of the season? Never mind, then.

New Orleans Hornets: I heard that coach Byron Scott was concerned about the team's depth, which led to the acquisitions of Bonzi Wells and Mike James. It's funny, but wasn't that why Houston acquired those guys? And it didn't work out? And it's going to work out now because...? Seriously, this is one of those moves that looks better on paper than it will look in action. Wells and James are both proven 20-point scorers...during a contract year. I have no idea why Hornets owner George Shinn would want to mess with the team's chemistry. They have the best record in the West! If it ain't broke, why break it? More reactionary madness brought on by the Gasol trade, I guess.

San Antonio Spurs: Leave it to the Spurs to do the impossible once again: They actually got older by trading for Kurt Thomas. Still, Thomas is a strong defender and can hit the mid-range jumper with regularity. He's also a really good rebounder. And the best thing is, his contract expires at the end of the season. I think San Antonio will miss Brent Barry's shooting, though.

Seattle SuperSonics: They sure picked up a mismash of crap: Brent Barry, Francisco Elson, Ira Newble, Donyell Marshall, Adrian Griffin. I have no idea why the Sonics wanted any of these players, unless maybe Clay Bennett wants to create his own version of The Most Dangerous Game with a bunch of humans that nobody will ever miss. But hey, more useless players equals more shots and an inevitable Rookie of the Year award for Kevin Durant, right?

Toronto Raptors: They got Primoz Brezec. Fear the Dinos!

Anonymous said...
I think the Sonics' moves were actually excellent. I mean by obtaining the likes of Adrian Griffin and Ira Newble they now rival even the Grizzlies in terms of roster talent (or lack thereof). Throw in the Heat and the Timberwolves and the lottery race is looking to be incredibly competitive this season--who can lose the most?

I do have to make one request though: can you do some sort of Friday afternoon shout-out (or man-love) dedicated to Nick Collison? The two or three times I've bothered to watch the Sonics play, I've been really impressed with that guy (maybe it's the goatee and the pasty skin). I mean, he would a great piece for a contender who needs a physical 4 who can rebound, play defense, and hit the midrange jumper (Orlando anyone?).
2/22/2008 11:05 AM

Anonymous said...
the sonics got 3 1st round picks - 2 from the suns for taking on kurt thomas' contract and now 1 from the spurs for thomas.

i understand phoenix's pick in 2010 is not protected and if nash suffers an injury in 2009-2010 or just gets sick of dragging shaq's corpse and retires, that pick may end up high in the lottery.

also, the spurs are so damn old that if the grim reaper visits them during the summer, they may lose like 80% of their roster. their 2009 pick is lottery protected, but if they end up in the lottery in 2009 it means they are rebuilding, which may mean one more lottery pick in 2010 which, I assume, would go to the sonics.
2/22/2008 11:38 AM

Anonymous said...
I think you're missing the biggest part of the Bulls trading Wallace. Frontcourt minutes for Noah and Thomas.
2/22/2008 11:54 AM

Jordan said...
I'm surprised it wasn't mentioned that after the Kurt Thomas trade, Seattle almost immediately waived Brent Barry, presumably to make roster space for the players they were receiving in the Cavs/Bulls deal.